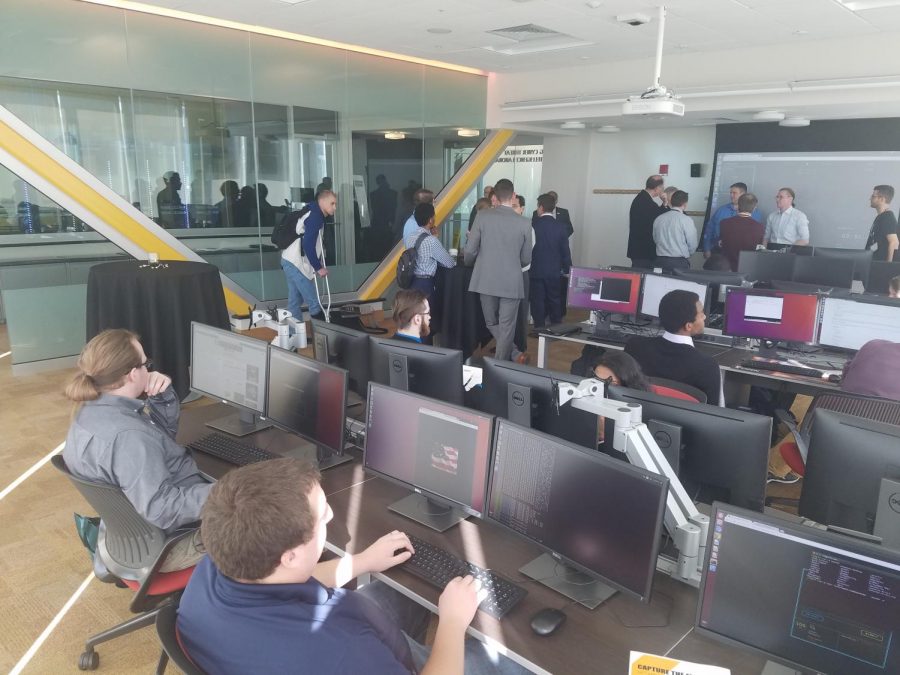 NKU students who plan to enter the battle for cybersecurity when they graduate will have a new place in Griffin Hall to practice their skills against the electronic enemy next Spring.  Budding security professionals will go “keyboard to keyboard” with hackers in the new JRG Cyber Threat Intelligence Laboratory to hone their skills. A sneak peek of the lab was held on Oct. 13.

The new $580,000 lab will be used to train students on the latest tactics that hackers are using to steal or manipulate data and how to stop them.

College of Informatics Dean Kevin Kirby said it was a big day for the college and for NKU as a whole.

“This is huge. It’s the biggest change to Griffin Hall since we opened six years ago. The IT major has grown super fast and they needed new facilities,” Kirby said. “It’s not only state of the art, but I think you’ll see a beautiful and inspiring space like the rest of Griffin Hall. I think it’ll be a fun place to be a student.”

“No tuition or tax dollars were used in the construction or outfitting of this lab. It all came from donors and corporate sponsors, including a $400,000 anonymous donation,” Kirby said.

Allyson Frame, a Computer Information Technology major, said she can’t wait to get into the lab and start working.

“I’m excited. I think it’s going to be a really cool experience to actually practice in a more realistic area than a classroom can be,” she said.

Frame added that the security skills she will be learning will translate easily into the working world.

“I think it’s really valuable,” Frame said.  “It’s like that in the real world sometimes.  You get hit hard and you have to know how to react and work with a team to deal with the situation.”

The director of NKU’s Center for Information Security said that cybersecurity will continue to be an issue of importance.

“It’s going to affect us more and more,” Walden said.”Cars are very hackable, and when Amazon S-3 went down a few weeks ago, people tweeted things like they could not turn off his oven that depended on a system halfway across the country that was down at the time.”

He added that cybersecurity isn’t just a question of security anymore, but also of personal safety.

“Our lives are really going to depend on this when your car is driving you and when your home is all intelligent. If all of that isn’t secure, we are tremendously exposed to criminals, more so than we have ever been before in our lives,” Walden said.

And as far as career opportunities are concerned, Walden said that students who concentrate on this area have very bright futures.

“The unemployment rate in the cybersecurity field is negative. There are several thousand open jobs in Cincinnati and most major cities,” Walden said.

“There is a huge demand for people with skills like incident response, network security monitoring and so forth that we are going to be teaching within the lab.”

Kirby said that the lab would also be used as a community resource.

“It’s not just a classroom,” Kirby said.  “We are going to use it for junior high school and high school summer camps, corporate training sessions, our cybersecurity team will practice in there. It will be a good way to tell the story of cybersecurity at NKU.”