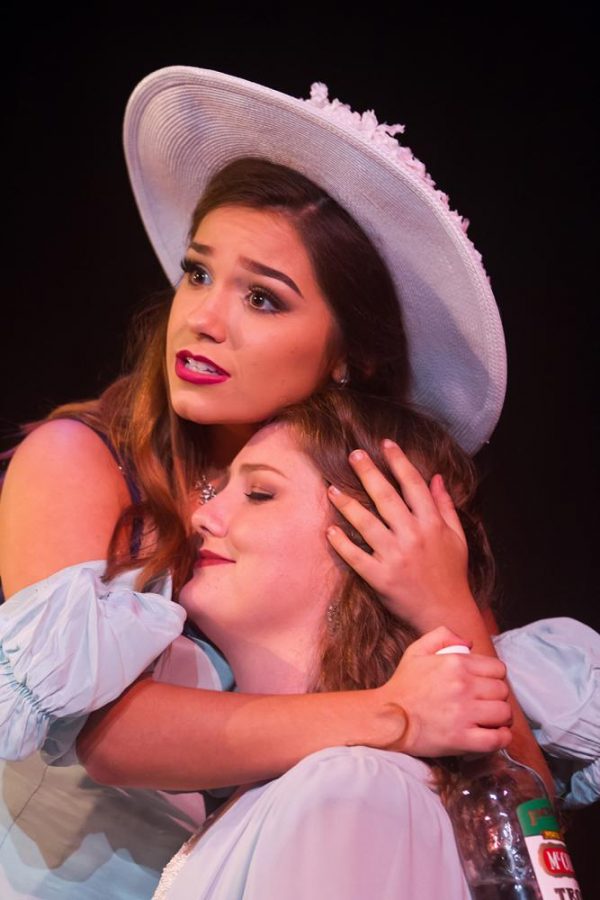 “Five Women Wearing the Same Dress” discusses how women look at themselves and at how other people look at them as a woman.

NKU prides itself in being a university that provides students with plenty of experience in their field before they venture out into “the real world” and pursue their career. Tucked away on the first floor of the Fine Arts Center sits The Henry, a theater that allows the students freedom to explore their dreams of putting on live performances.

Each semester, The Henry houses three student-run plays, one of which this fall is Five Women Wearing the Same Dress. Since her freshman year, it has been director Kaitlin McCulloch’s goal to bring a play to life in the Henry theater; now she is putting her work on display from Oct. 9-12.

It all starts with a proposal to the producer of the Henry Konstantinow series, Professor Brian Robertson. Each year he approves the ideas students send in for plays they want to direct after taking the class Directing I.

The shows are free to the public, and seats can be reserved by signing up for them. The Henry series plays are completely run by students and allow students from departments across the theater program to showcase their skills and gain experience in the field.

“now,” which is fitting for Five Women Wearing the Same Dress. Written in 1993 by Alan Ball, it looks at the lives of five bridesmaids as they sit in a room away from the reception, discussing their relationships and inevitably learning more about each other than anticipated.

The actual process of bringing this play to life has been an eye-opening one for Kaitlin McCulloch, as this is the first Henry play she has directed. She said throughout the production she has learned a lot about herself as a director, especially in how she works with actors and the script.

“I kind of went into it not knowing exactly what I was going to do, but I think I kind of found my way and I think it’s turned out well,” McCulloch said.

Robertson said that the student-run plays are one of the most rewarding opportunities; he enjoys seeing both what plays interest the students, but also how they bring life to the performances.

Robertson said Five Women specifically looks at issues of femininity and identity, discussing how women look at themselves and at how other people look at them as a woman.

McCulloch chose this play specifically because of the rare ratio of the cast it displays: five women and one man.

She wanted to offer a hilarious, endearing, thought-provoking show that represented the talent women have and bring to the project they’re involved in.

Actress Ally Davis, who plays the role of Georgeanne in Five Women, said she was drawn to audition to the play because of how it spotlighted women.

“It’s just refreshing to see all these women in these, like, equal roles having important things to say and having opinions for themselves,” Davis said.

Patrick Jackson plays Tripp Davenport, the only male role seen in the show, and he said he was happy with the play because it showed how women are their own entity. He also commented on what it was like to, for once, be the minority within a production.

“It’s kind of interesting because you don’t really get to see women highlighted in the workplace, in theater especially, or businesses, so it’s really cool to see the different techniques they bring,” Jackson said.

The play delves deeper into feminine issues, but actress Taylor Morrison says Five Women also sparks thoughts about other topics that aren’t normally discussed. She plays Mindy in the show and describes the women all going through “moments of catharsis” as they’re forced to deal with problems they have repressed for a long time.

The cast and crew behind Five Women Wearing The Same Dress hope they can provide the audience with an evening of laughter and entertainment, while also raising questions and showing the power of women. Davis said one of the biggest takeaways was that “Girls are support systems, you need fellow girls in life to help lift you up.”

Five Women Wearing the Same Dress is currently running in the Fine Arts building’s Henry Konstantinow Theatre. The show began on Oct. 9 and runs until Oct. 12.