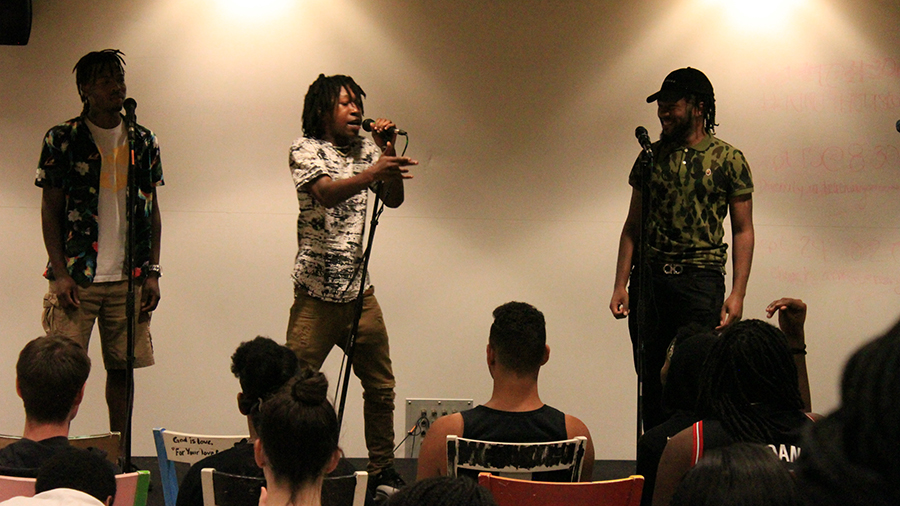 About 10 rappers graced the stage in the Student Union for the hip hop cypher. (Tommy Bailey)

About 10 rappers graced the stage in the Student Union for the hip hop cypher.

A chorus of “oohs” erupt from the crowd followed by laughter. Audience members hop to their feet, moved by Mich Tanksley–an NKU student who raps under the name Tooney Lean–who just decimated his opponent in a rap battle, as the enthused crowd suggested.

The moment was a highlight of  Thursday Night Lights’ Hip Hop Cypher, which took place last Friday. The battle, as well as the cypher itself, was equal parts intelligent quips, showcases of actual talent, moments of slight awkwardness and asking yourself, “Wait, what does that actually mean?”

“The first one was our Halloween cypher last year 2k16, it’s been building ever since then,” said Washington, junior psychology and public relations major.

The two got their idea to host a cypher around the time of the annual BET Hip Hop Awards. BET hosts a cypher each year and Washington said he threw out the idea to host one of their own and they took it from there.

Friday’s cypher was Rosewood and Washington’s third overall and first of the 2017-2018 school year.

Rosewood and Washington run the cypher almost entirely by themselves, though they recently added another member to their team to help them gather the beats.

“Last time we wanted to just play the beats ourselves, we didn’t want to take submissions because if you’re a freestyler you should be able to do it no matter what beat we give you,” said Rosewood, senior communication studies major. “This year we decided to switch it up and actually listen to the artists’ requests.”

Friday night’s cypher was split into four rounds, to give the rappers ample chances to show off.

The first round was a standard freestyle, the rappers each had 1.5 minutes to rap over a beat from the DJ.

The second round was similar to the prior, but each rapper had to include a word that the audience gave. Some of these words included condiments, matrimony, and fugazi.

The next round allowed each artist to rap over a beat they personally selected, an effort to give the artists a chance to show off their personal style.

The final round was the rap battle was essentially tacked on. Only a few rappers decided to participate and towards the end, it devolved into audience members taking over the mic to join in the fun.

“We had the space for two hours so we’re like ‘We’ve got it for two hours we might as well use it for two hours.’ So we kind of just came up with a bunch of different games,” Washington said. “Wild N’ Out was a huge inspiration and huge influence.”

Washington said they change the cypher format each semester to keep the participants and audience interested.

“Slowly but surely it’s really starting to pick up and people are starting to get into it even more. It’s been a pretty nice event if I do say so myself,” Washington said.

Rosewood and Washington said they plan to do more events that aren’t cyphers but will still cater to a wide range of people. The two are planning on hosting another cypher, but don’t have a concrete date or plans set.