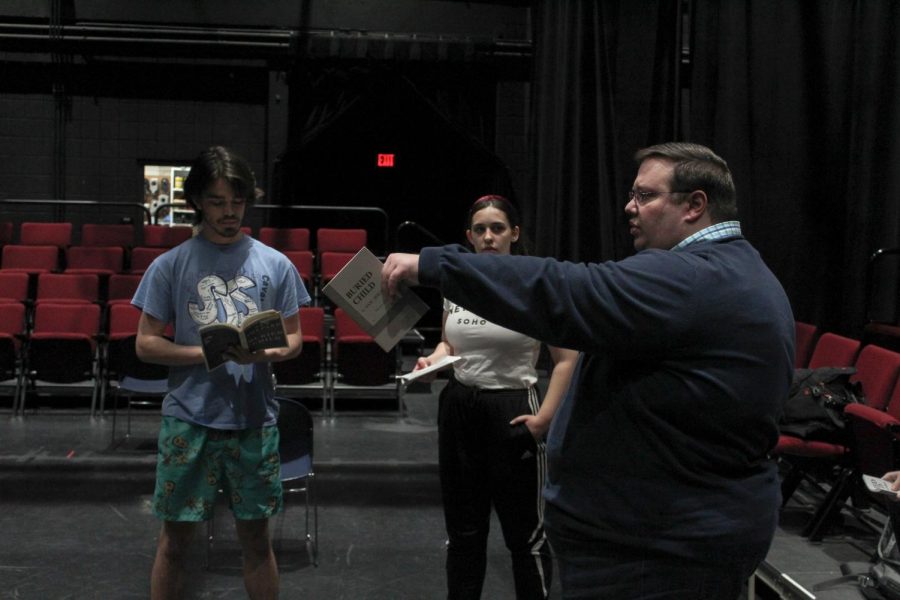 The Pulitzer Prize winning play heads to the Stauss Theatre

“Buried Child,” a Pulitzer Prize-winning three-act play that reflects on the death of the American dream, is the oddest play of the season, according to junior BFA acting major Trevor Browning.

“It’s totally unlike anything they’re doing this semester,” Browning said. “It’s bookended by two musicals. There’s the opera HMS Pinafore, and there’s Mamma Mia, and right in the middle is this gritty Midwestern disaster.”

The play is set on a late-1970s farm in Illinois, where the fields are barren and the family of a husband, wife and two sons is completely dysfunctional. Their lives are turned upside down when a long-lost grandchild returns and uncovers dark secrets.

Michael Hatton, the play’s director, said “Buried Child” touches on PTSD, mental health issues and addiction and that it resonates with a lot of the feelings and concerns that many Americans across the country are currently feeling. He said the play asks a lot of important questions.

“Is the American dream alive? Or is it a lie? Was it ever real? What does it mean to have hope in a situation that seems absolutely hopeless?” Hatton said. “How do you deal with the depression that comes with knowing that everything you hoped or worked for, you’re not able to survive? How do you live?”

Gabby Barbosa, BFA acting junior who plays the family’s matriarch Halie, said starring in this play has been strange for her because it is primarily about American culture and she is Puerto Rican.

“I literally was born into a different culture, so having to study this culture and submerge myself in it where it’s believable that I was actually born and raised here has been a little bit of a challenge,” Barbosa said. “I have to ghost myself in there like I was part of it … and create these memories in my head.”

Barbosa complimented Hatton for helping her learn and for assisting with whatever she needed. Her character in the show would’ve been born in the 1920s, which she said was challenging to examine.

“It’s difficult. It’s a huge gap. But history is our friend when it comes to these things, and there’s nothing a little research can’t help with,” Barbosa said.

Browning plays Halie’s second son Bradley, who only has one leg due to a chainsaw accident. The costume department is fitting Browning for a fake prosthetic leg that will sit around his leg and restrict his movement in an effort to make the amputation appear more realistic.

For Browning, playing a villain like Bradley—who he described as “a sadist”—is a drastic change from his prior NKU roles in “Initiative,” where he played the comedic relief, and “Three Sisters,” where he played a philosophical charmer.

“Going from the charming, goofy guy to this villain who is just grimy and doesn’t take care of himself and doesn’t care what people think about him… is different from any character I’ve played before,” Browning said. “I’ve definitely played villains before, but never one that just had no regard for humanity.”

Browning said working on the show has been educational, as rehearsal so far has mostly consisted of examining the culture of a bygone era and discussing themes present in the show like the American dream, family and urban legends.

“Everybody wants to be the family in the Norman Rockwell paintings, but nobody really is,” Browning said. “That’s a theme that carries on throughout. Everybody wants this idealistic American lifestyle, the self made millionaires with the trophy wives and the kids. And nobody really gets it.”

Hatton said NKU’s School of the Arts is trying to push for diversity in the theatre by exposing students and patrons to plays that deal with heavier topics like the ones found in “Buried Child” or plays written by women, people of color and people in the LGBTQ community.

“We want to make sure that the people who are on campus and in our community have an opportunity to see their stories and themselves on our stages,” Hatton said. “Theatre, it’s meant to be a reflection of society … the commercial theatre has been pushing more and more for telling stories that perhaps would’ve been ignored in the past.”

Hatton credited his student dramaturge Kennedy Hall, BA musical theatre major, for providing extra research for the show and for giving presentations to the cast during rehearsals to assist them in their roles. He also gave credit to the student production designers for coming up with practical effects that make the characters appear wet or muddy without having an actual rain effect on stage.

Barbosa compared the plot of “Buried Child” to a game of Clue, where audiences must put together the clues in their head throughout the show and “you don’t really know what’s going on until you piece it all together.”

“It gets hinted here or there and then you get the big reveal and it’s like ‘Wow, yeah, that explains everything,’” Barbosa said. “You’re like ‘Okay, this is interesting. Ooh, what’s happening here?’ and then in the end, it blows your mind. It’s very M. Night Shyamalan, plot twist. Audiences should expect to be rattled.”