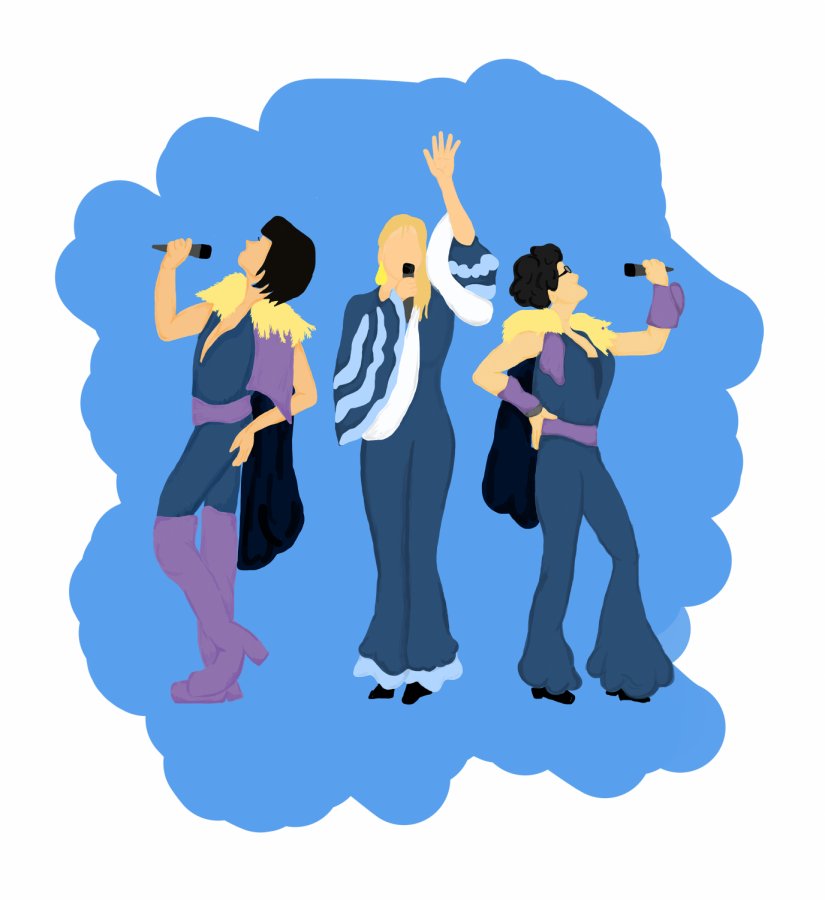 Here we go again—NKU’s School of the Arts is performing the hit musical “Mamma Mia!” this spring. With the rights recently released to the public, it may seem like “Mamma Mia!” is dominating the theatre world, but fans of the musical and movie aren’t complaining.

The show, based on the discography of ‘70s Swedish pop band ABBA, is loved by musical theatre aficionados for a reason—the choreography, bright colors, iconic soundtrack and lovable storyline blend together to create a unique experience.

Since she was 3 years old, junior musical theatre and biology major Makenzie Ruff has been obsessed with “Mamma Mia!” now, she’s going from singing “Dancing Queen” on her parents’ karaoke machine to being cast as Sophie in the musical that sparked her interest in theatre.

“I think what I’m most excited for is finding and adapting to my own Sophie,” Ruff said. “To see if she’s quirky or whatever she becomes.”

Ruff is eager to develop her version of Sophie and find how she differs from the one captured in the film scene or the Broadway stage.

“Mamma Mia!” is such a popular show because it’s one many can relate to. Ruff said the underlying message behind the pop dance routines and sparkling scene design is family. She said the story highlights the pain of not knowing who you are or where you come from and the excitement of searching for those answers.

“To realize if you are somebody who does have a mother and father figure in your home, how lucky you are because so many people don’t have that opportunity or that benefit to have a two-parent household, and just understanding the value and importance behind it,” Ruff said.

The story has been continuously popular due to its family-oriented message and inspiring characters, but relatable conflict arises as well. Despite Sophie’s desire to know who her dad is, her mother Donna raised Sophie while being seemingly unbothered by the fact that Sophie’s dad wasn’t present.

“Women are brought up to rely on men, especially because she grew up in the ‘70s, so it was like ‘you need a man to work’ and everything, but then she upgraded her life, moved to Greece for Sophie,” Duggan said. “She raised this baby on her own, didn’t care who the dad was. She’s powerful.”

Duggan said the audience can find anyone in the cast to relate to, and that’s one thing that makes this show so special—it’s personal.

“Although ‘Mamma Mia!’ is this popular, poppy, upbeat show, it still tells a story that can hit a bunch of people,” Duggan said.

“Mamma Mia!” first opened in Oct. 2001. Being such an iconic show, it’s difficult to play around with the story. Duggan said that Director Ken Jones has plans to make SOTA’s performance especially unique. Set design changes and upgraded costumes are just two things to expect from this performance that will be different than other adaptations.

According to Duggan, the generic “Mamma Mia!” set includes the white walls and blue shutters that are usually associated with Greece—but that’s not realistic to Donna’s story. In the show, Donna is running a beaten down hotel, barely holding it together. Chipped paint and mismatched shutters and doors create a quirky atmosphere that Jones is trying to capture with the set design. Plants, a tree in the middle and vines everywhere contribute to the aesthetic being implemented to convey how old Greece really is despite the brand new feel many shows carry.

“It’s hard to change the formula of ‘Mamma Mia!’ because you’re tampering with something that obviously works very well,” Jones said. “I think from your standard ‘Mamma Mia!’ where people typically talk and walk through some of the numbers, there’ll be a lot more dancing in this.”

Fans of the 2008 “Mamma Mia!” movie are encouraged to attend the live show for a different experience.

“Nothing is like seeing it live. The way the audience will bring you in, the dance, the energy, the lights, the music—the band is going to be incredible,” Jones said.

The band, led by Jamie Strong, is going to mimic ABBA’s original sound to help produce an organic experience.

“It’s such a new point of view on the story and the world that they live in which we can have a glimpse of,” Duggan said.

“Mamma Mia!” will run from April 24 to May 3 in the Corbett Theatre.