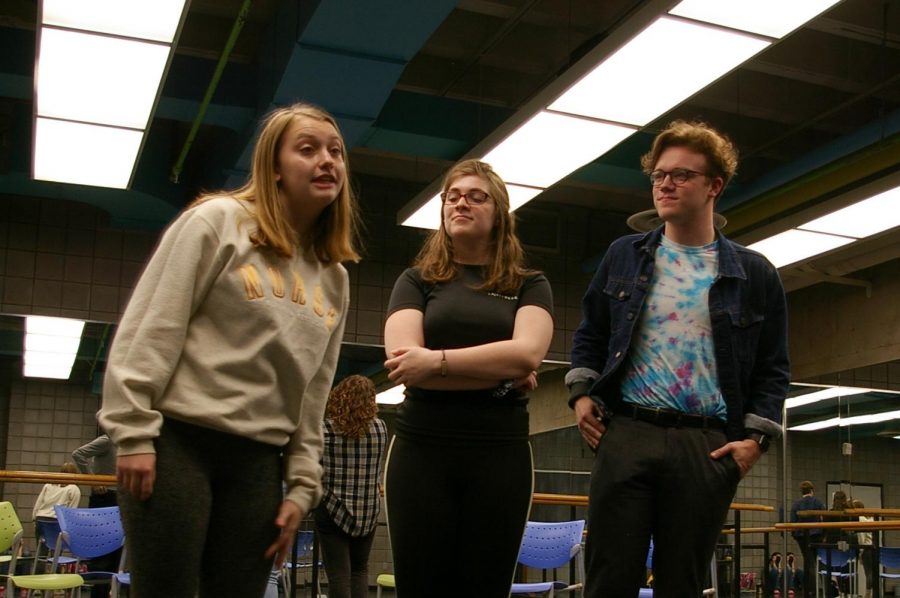 Some cast members rehearsing a scene in 26 Pebbles.

“26 Pebbles,” a play about the aftermath of the Sandy Hook shooting, will run in the Henry Konstantinow Theater from Feb. 24 – 26.

Lizzie Lotterer, senior BA theater major, is directing “26 Pebbles” as her capstone project and her third honors project. Her honors projects have all focused on approaching difficult topics through theater. In her plays, Lotterer said she wants “enlightening discussion between her audience members.” With “26 Pebbles,” Lotterer said she hopes to start a chain reaction with people talking about difficult and dramatic topics.

“It is extremely relevant in this setting and with this audience that I am reaching,” Lotterer said. “It is a deep and personal issue to me that I think really needs to change in the United States.”

Everyone involved in the show said they can remember the exact moment they found out about the Sandy Hook shooting.

To help the cast to better understand their characters, Lotterer had a close friend who is a school shooting survivor come in to talk with the cast.

“Hearing the long lasting effects it has on a community on families of the victims and not just the families of the victims but the survivors,” Lotterer said. “The other people that were involved—the entire community as a whole—have really touched me. I don’t want to be affected by a school shooting and so I think it is important … even though this is something that hasn’t happened to me, I don’t want it ever to happen.”

The cast and crew of “26 Pebbles” want to let the audience know that events like these need to be talked about.

“People who go to NKU should see the show because this was an event that happened,” Halee Hood, senior BFA acting major, said. “In our middle school, maybe primary school time, for most traditional NKU students … I feel like it is something that a lot of us haven’t really talked about.”

Hood said the cast concluded that they’ve never actually sat down and talked to others about tragic events like these.

“These mass shootings happen … but nothing to this degree, because it was kids, so it was different. We never really had the chance to discuss it, formulate opinions on it,” Hood said.

Evan Rogers, sophomore BFA acting major, said he knew upon auditioning that “26 Pebbles” would be a hard story to tell—one that he didn’t even know if he was ready to tell—but one that he thinks “needs to be told and a message that needs to be shared.”

“It’s one that a lot of people need to hear. One that doesn’t, in my eyes, get enough light shed on it,” Rogers said. “So I think the fact that we’re kind of doing something about an issue that is very topical, is going to open some eyes—at least I hope it does.“

26 Pebbles will run Feb. 24 – 26 in the Henry Konstantinow Theatre. The show is free, but seating is limited; to acquire a ticket, follow @insidethehenry on Instagram or reach out to a cast member.