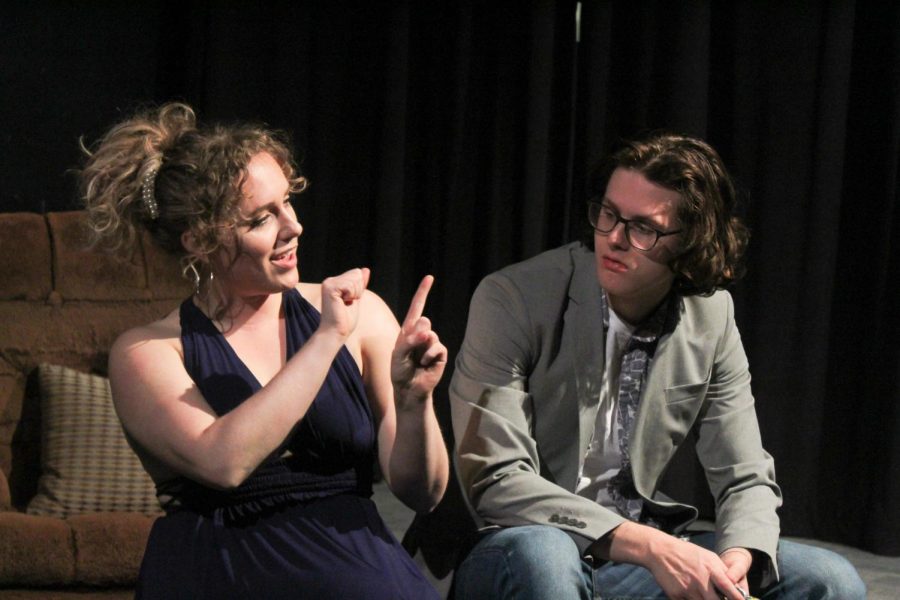 The Henry Konstantinow Theatre’s adaptation of “Tribes” sheds light on the lives of those living with a disability and the prejudice that people in disabled communities can face, sometimes even from their own families.

Set in modern day England, “Tribes” follows the story of a boy named Billy who was born deaf. Billy was born into a hearing family, and was never taught sign language since his parents wanted him to be as “normal” as possible.

Up until graduating college, Billy navigated the world by only reading lips.

The play begins when Billy returns home from college and meets a girl named Sylvia who was born hearing but is slowly going fully deaf. The show spans the next two years of Billy’s life as Sylvia teaches him sign language and he makes some hard realizations about his family.

Senior BFA acting major James Dawson directs the show, and is passionate about sharing Billy’s story after reading the script.

“When I read it, I instantly knew this was the show that I wanted to do. A lot of times, people don’t think about lives that are different from their own. This show gives a glimpse into a life that’s different, and gives you a little bit of an understanding,” Dawson said. This is the first full-length student production Dawson has directed.

“I’ve never loved hating a family so much. This family that Billy is a part of is a real piece of work,” he said.

“[American Sign Language] was something that I was super interested in. Then, when I found out that James was going to be doing the show I was like, ‘this is gonna be perfect,’” Hood said.

An integral, yet challenging, task for cast and crew members was learning American Sign Language which, according to Hood and Dawson, is used as a type of choreography in the show. To ensure all signing was accurate, the help of Ann Welch was enlisted. Welch teaches ASL classes offered by NKU through the education department.

“The hardest part for me has been integrating two languages because I do speak and sign in the show. I’ve not acted and signed before. That was a big challenge to figure out because for a lot of signing, you use your face,” Hood said.

Unlike Hood, Minks didn’t know any ASL prior to working on the show.

“I spent more hours on my own with this show than anything I’ve ever been a part of. Daily, I would spend two to three hours going over things that Halee and Ann taught me,” Minks said.

There’s also a projector that captions what is being signed, so that the audience can follow along, which was “pretty difficult” for Dawson to coordinate.

Though this is a fictional story, the show gives a platform to an issue that is an “actual reality” for a lot of people.

“All the humor and the crude stuff makes you pay attention. Then it hits you with the really important and meaningful stuff that people will need to see,” Dawson said.

Minks said Tribes is interesting to all audiences.

“There is not a bland moment in ‘Tribes’. It finds very interesting moments in mundane situations and turns that into things that are far more serious than you would expect. It is very fascinating to me and I think it will be to you,” Minks said.

“Tribes” will run in the Henry Konstantinow Theatre in the Fine Arts building from Nov. 18 to Nov. 21. All shows will be at 7:30 p.m and doors will open at 7:00 p.m. The show is free, but seating is limited, so you must sign-up to secure your seat. Sign-up sheets are posted on the Henry call-board outside the King’s Lounge on the second floor of the Fine Arts building.