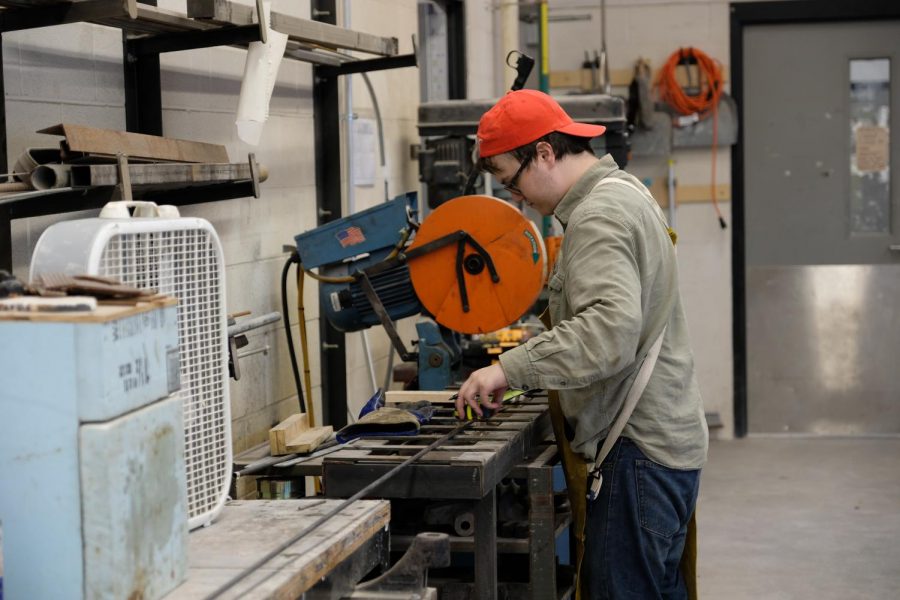 New media art major Zack Hargrove cuts away at a piece of metal for use in “Light Streams”.

The light-based art festival will feature several pieces from NKU students and faculty, past and present

BLINK, a free, light-based art festival, is easily the biggest event in Cincinnati. The inaugural BLINK in 2017 drew more than a million people to the Queen City—almost 400,000 more than Oktoberfest Zinzinnati. After the roaring success of the festival’s first year, Brad McCombs, associate professor of art and music program head, knew that NKU’s School of the Arts had to get involved somehow.

Hans Schellhas, associate professor of visual communication design, was contacted by a member of the Cincinnati USA Regional Chamber to get involved with the festival. He approached McCombs about a collaborative project, and the two pulled in Dr. Amy Gillingham, director of orchestras, to submit a proposal to BLINK.

They knew that they wanted to do something related to the Ohio River, with the piece intending to examine how waterways can be used to examine both the future and the past.

“We wanted something iconic,” McCombs said. “We arrived at the idea of this canoe … we thought it was a really beautiful shape, and also it helped tie in with the water, and with the past and the future.”

For NKU’s installation at BLINK on Oct. 10, titled “Light Streams,” eight canoes will be suspended in the air, adjacent to the river. The NKU Philharmonic Orchestra will sit under the canoes, and as the orchestra plays, lights will shine and flash on the canoes in synchronization with the music to produce dazzling images and colors. The musicians underneath will be wearing blue glowing bracelets, as a symbol for water underneath the boats.

McCombs said inspiration for the canoes came from examining the history of Cincinnati and its development over time. The Native Americans settled in the area because the bend in the river was a conducive spot to live. Later on, in the industrial era, the Ohio River was vitally important for transportation. In modern times, he said, we celebrate the water.

“Now, with The Banks and [Smale Riverfront Park] and Newport on the Levee, there’s celebration of looking at more natural elements—appreciating the water, our proximity to the water and engaging the river in a new way,” McCombs said.

Schellhas said while he and McCombs initiated the project, they wouldn’t be able to come close to finishing without the participation of students.

“The student help has been really important in helping us accomplish a pretty big objective,” Schellhas said. “It’s fun to work with students. It’s just nice to be able to share with students. And, you know, we’re all here for the students. It only makes sense that they’re an important part of this.”

One of those students is Zack Hargrove, a fifth-year new media art major. He was working on a project for his senior art exhibition in the Ceramics and Sculpture Studio, when McCombs, who he referred to as “Professor Brad,” approached him with a job offer to work on the project.

McCombs is one of Hargrove’s two favorite professors at NKU—the other is Steven Finke, associate professor of spatial arts, sculpture—and Hargrove said he wouldn’t be on his current path without the guidance of McCombs.

Hargrove took a robotic art class with McCombs, where he discovered the work of Stelarc, a performance artist who claims that the human body is obsolete and who often modifies his own body with robotics. Hargrove said the work of Stelarc is where he draws most of his inspiration from, and that he wouldn’t have even heard of the artist had it not been for the class. He took an interest in coding during the class, and is now constructing and coding his own animatronic project for his senior art exhibition.

Hargrove has worked on several aspects of “Light Streams,” from sanding down the canoes to woodworking to metalworking—which he particularly enjoys.

“Cutting metal on that saw in there, it’s relaxing, almost,” Hargrove said. “It’s like watching those oddly satisfying videos.”

It’s not just current students who are involved in BLINK. Charity Rust-Jordan, a spring 2018 graduate with a degree in spatial arts, is working with some of her former classmates on a willow and tissue paper sculpture of Margaretta Baker-Hunt.

The Baker Hunt Art & Cultural Center reached out to Rust-Jordan after they saw a social media post from the Cincinnati Art Museum, where she was teaching a class on sculpture. Baker Hunt wished to place a float in the parade on BLINK’s opening night, and asked if she would teach a class that involved a group collaboration to build the float.

The six to eight week course, which was free and open to members of the community, had several different members at varying levels of art experience.

First, Rust-Jordan reached out to Ben Huber, the studio tech from the Ceramics and Sculpture Studio, and asked him to assist with the class. Then, she reached out to several of her previous classmates and other alumni, and five of them also joined the class. Rust-Jordan is enthused about the teamwork involved in the project, she said, as the festival heavily emphasizes collaboration.

“One of the ideas behind BLINK is ‘the future city,’ but it talks about everyone working together,” Rust-Jordan said. “It’s just so cool to not only have some members of the community, but also some previous peers all working together to create this.”

The sculpture of Baker Hunt’s founder is being crafted in the traditional way of making paper-lanterns, and the gargantuan model is surrounded by representations of flowers, insects and birds from Baker Hunt’s famous gardens.

Rust-Jordan said it was amazing to collaborate with other alumni, as she missed being around other artists every day like when she was in college.

“One of the things I missed the most was just having that community that you could bounce ideas off of and do some constructive critiques with,” Rust-Jordan said. “[NKU has] always been a very big community feel … I really missed that.”

Schellhas said everyone at NKU should go to BLINK while it runs from Oct. 10 – 13, regardless of whether they see “Light Streams” or not.

“It’s part of our community,” Schellhas said. “I think it’s fun for [students] to see what NKU students and faculty are doing. I think they automatically feel a connection in that kind of way, and I think it helps them to feel connected with BLINK in some way too.”

While Hargrove initially looked at his work on the canoes as just a job, his experience changed later on.

“I’m proud of what we’ve done so far,” Hargrove said. “It’s evolved more from a job into something to be proud about, you know? It’s an accomplishment.”

“Light Streams” will be presented on Oct. 10 at 7 p.m. Can’t make the initial opening? Don’t worry. The project will be on display for the length of the festival, with a recording of the NKU Philharmonic Orchestra’s performance from the first day.