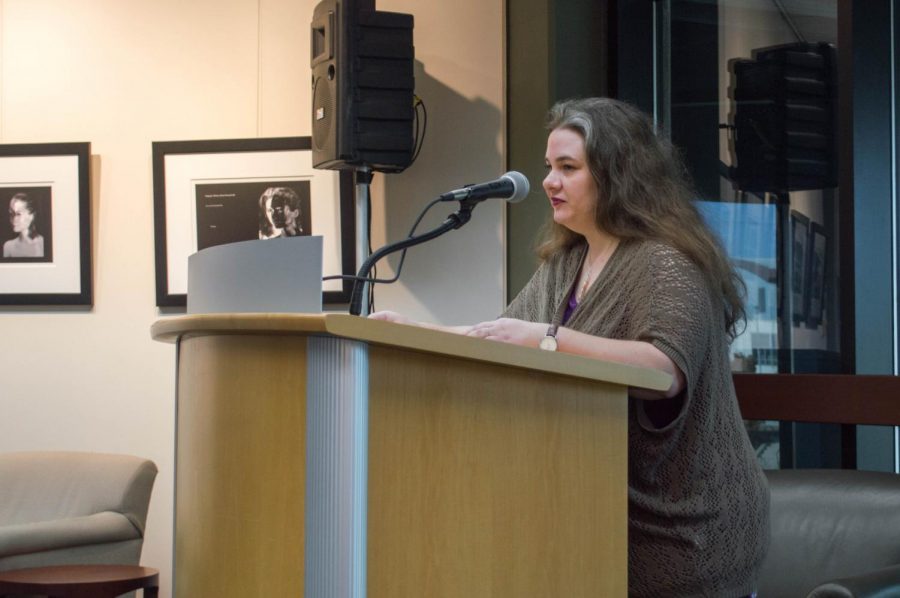 Megan Henson reading her poems from her book ‘What Pain Does’

The ‘What Pain Does’ exhibit opened in Steely Library this Friday

The work is a collaborative effort by husband and wife Skaggs and Henson, respectively, that seeks to show pain through a collection of 28 poems and 26 photos. Henson is behind the poetry and Skaggs is responsible for the photos.

The event took place in the Eva G. Farris Reading Room on the second floor of W. Frank Steely library. Photos accompanied by poetry excerpts from the book lined the walls and later in the evening, Hensen read aloud a number of her poems. There was also cake, which was fitting since it was Skaggs’s birthday.

“We should have done this on a Thursday, but Thursday wasn’t my birthday,” Skaggs said as he thanked everyone for coming.

Henson has Fibromyalgia and Thoracic Outlet Syndrome, which both cause her chronic pain.

“I wanted to go to Spring Grove Cemetery and find Megan’s pain. I saw these cracks on the headstones and I started photographing them,” Skaggs said.

These photographs were later added on top of portrait photos through the use of Photoshop to aid the visualization of pain.

All photos were originally taken in color, though in the end, Skaggs decided to desaturate them in black-and-white because the color photos “didn’t have the same somber feeling.”

When Hensen took the podium to read several of her poems, she opened by saying how her own struggles with chronic pain relates to the opioid epidemic, which is one of the types of pain explored in-depth in “What Pain Does.”

“A lot of people have chronic pain and a big reason why we have an opioid epidemic is because people with chronic pain get prescribed painkillers, and they don’t necessarily get addicted but they get dependent,” Henson said.

Henson and Skagg’s previously entered the book in a flash fiction contest in Kentucky where it won second place. Henson said that while her words are intended to be read as poetry, they can be read as fiction as well because of the metaphors.

This is not the first project the two have worked on together. In 2007, Skaggs published “Invisible Woman,” which was a collection of black-and-white photos that featured Henson as the model.

“In 2011, Megan and I started talking about another project to do,” Skaggs said. Once he read some of the poems Henson had written, he said, “Maybe there’s a way we can get the story out where we can see it.”

The work is published by Dos Madres Press. The publishing company was founded in 2004 and operates out of Loveland, Ohio. According to the company’s website, it “is dedicated to the belief that the small press is essential to the vitality of contemporary literature as a carrier of the new voice and new works by established poets, as well as the older, sometimes forgotten voices of the past.”

The process of publishing “What Pain Does” was not an easy one. According to Henson, it took 11 rejections letters to find a company that was willing to publish the book.

“You should always put your work out there because it will get accepted eventually if you have the patience,” Henson said.

The photos and poetry excerpts will be left on display in the Eva G. Farris Reading Room until Oct. 4. For anyone interested in purchasing the book, it is available for purchase from the NKU bookstore for $17.00.