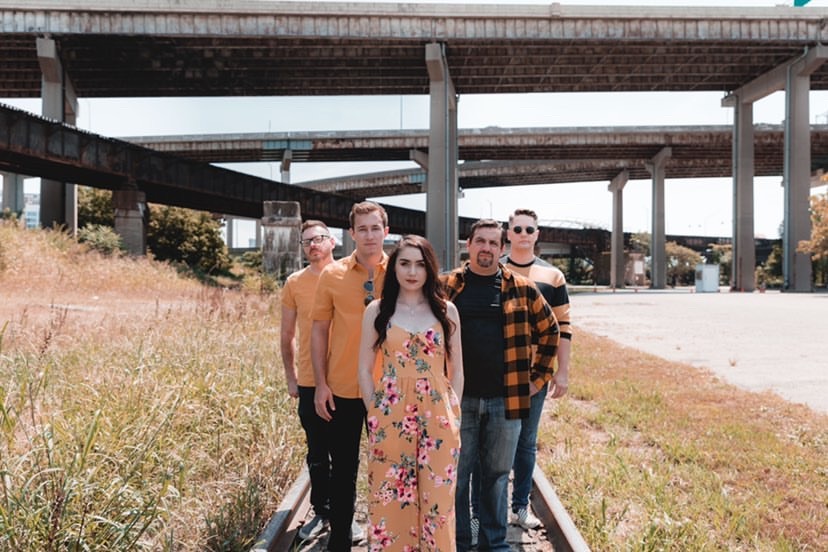 Senior musical theatre major Kali Marsh had everything figured out for post-graduation life. She had plans for the Disney College Program, moving to New York City and pursuing a career on Broadway. But after finding a home in Cincinnati-based pop rock band Rosewood Coast, Marsh’s goals have shifted.

Marsh attributes finding her voice to listening to Celine Dion in high school and, more recently, Lizzo. Sempsrott credits artists like John Mayer and Trygier named the 1975 as a main influence. Other significant artists include The Weeknd, Paramore, Kings of Leon, Wildermiss and other alternative rock bands. Their blend of diverse music taste has meshed together to create a unique sound that can’t be found elsewhere.

The dream of performing on Broadway has followed Marsh throughout her life. It wasn’t until she reconnected with Trygier, a friend from high school, that her dream began to evolve. Suddenly, Broadway was no longer at the forefront of her mind like it used to be. The success of the band became a significant contender, although both aspirations exist concurrently.

“The Broadway scene has been my dream for a lot of my life,” Marsh said. “Now that I’m in this band, it’s changing.”

Having focused on theatre for much of her life, Marsh never considered herself to be the type of girl to be in a band. Earlier this year, the idea never occurred to her to pursue her love of music in that form. But when Trygier contacted her about auditioning for Rosewood Coast’s lead vocalist, Marsh went and immediately felt a sense of belonging with the group.

“I just remember feeling like I was at home and I was with a really safe group of people and I was supposed to be here,” Marsh said.

Before Marsh, the band recorded their first album with their previous lead singer, Kaitlynn McNutt, which debuted in March of 2019. Due to creative differences, Kaitlynn McNutt departed.

Trygier said the band took about a three month hiatus from making original music during their search for a lead singer, which was proving difficult.

“I was just like, ‘man, are we going to cover songs in bars ‘til we die, then?’” Trygier said.

With the addition of Marsh, the band was reignited and their aspirations were aimed higher.

“As a musician, I think you always have those goals in the back of your mind to make it big one day,” Sempsrott said.

It wasn’t until they became more confident in their abilities did those goals become reality.

In the past year, Marsh faced many difficulties in her personal life, and her experiences heavily influence her creative process. She believes it’s important as artists to have the ability to express multiple concepts through their work, but Rosewood Coast isn’t focused on branding a specific message with each piece of art they create.

“I found myself having a hard time writing because I was like, ‘well I’m scared that if I write about what I feel, and what’s changed me as a person in my life, that it’s going to change the sound of Rosewood Coast,’” Marsh said.

Marsh found it difficult in the beginning to creatively contribute to the band since she wasn’t a part of the first album. Their newest album, “Wisdom in the Waves,” broadcasts positive messages and a general outlook of changing the world. The album cut “Junebug” features LGBTQ+ diversity in its music video and is ultimately about inclusivity. The band believes in the importance of being involved in the dialogue surrounding culturally relevant controversies and showing their support for communities they may not identify with.

“I think it’s just writing about things that are emotional to us and strike a chord with us— something that we can really pour our hearts into,” Sempsrott said.

Marsh’s unique contribution to the band’s writing process may prove to produce heavier material in the future. While avoiding an entire album dedicated to heartbreak, she still aims to dive into the grittier details of life that “Wisdom in the Waves” didn’t include.

Ultimately, Rosewood Coast aims to create a safe space for its listeners by creating content that’s transparent and relatable—like writing vulnerable pieces on emotional abuse and toxic relationships while championing inclusivity and diversity.

“I have a lot of political thoughts myself. I think it comes into the frame when writing music naturally,” Trygier said. “But it’s not something I purposely set out to do. I suppose it’s just speaking my truth, whatever it is.”

Marsh’s performance style is directly tied into the music she’s creating. Her desire to produce more raw and real content based off of her personal experiences will result in a more organic performance.

“I don’t ever want to stop singing, stop performing,” Marsh said. “Just keep me on stage.”