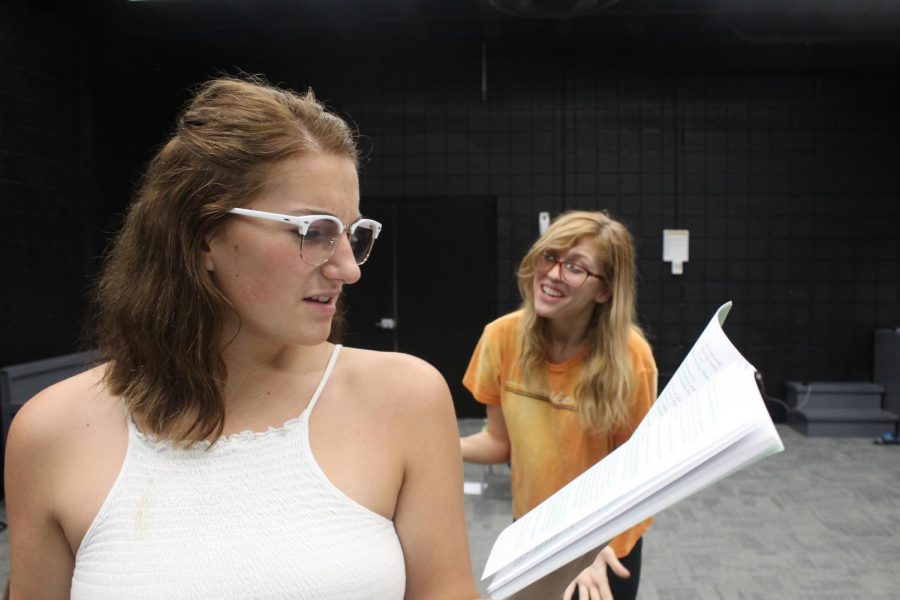 For acting BFA senior and stage director Mikinley Grace, being a part of the Henry Konstantinow Theatre’s latest production, “Children’s Hour,” is a passion project.

“Children’s Hour,” a drama written in 1934 by Lillian Hellman, details how two women who run an all-girls boarding school are falsely accused of having an affair by a troublesome student, and have their lives ruined because of the allegations. The three-act play went on to be nominated for a Pulitzer, and has been adapted for film and other famous stage productions numerous times since its publication.

However, as director, Grace is transporting the play to the 1970s, with period authentic props and costumes. The show will also be shown ‘in the round,’ where the audience surrounds the stage in a circle—something uncommon for plays both on the main stage and in the Henry.

Despite the changes to the show, Grace is being careful to handle an American classic like this one, with respect to the source material. She said the play’s themes and plot are still very relevant despite being written 85 years ago—especially the forbidden relationship that is central to the story.

“That just is not okay in their society, and they don’t want their children anywhere near it,” Grace said. “And I think when you look in today’s world … that’s definitely prevalent. Just because you’re not that way, or you don’t agree with it, and just completely ruining someone’s life. That’s insane.”

Katherine Taylor, a freshman theatre major portraying Martha, said performing a show in the round feels different, as performing in a circular space breaks a lot of traditional theatre rules.

For Emily Greenwell, freshman theatre major portraying Karen, this is her debut role in any theatre production.

In her first acting class at NKU, she’s fiercely paying attention to even the smallest detail to ensure she doesn’t lag behind her more experienced cast members.

Greenwell won’t be without help, however. When students start in the theatre program, they’re assigned a mentor. The mentor she was assigned just happened to be her fellow cast member Faith Vondanhorf.

“Before rehearsals, I’m always asking her questions. Not necessarily to do with the show, but about my major, doing a minor, having a job on campus,” Greenwell said. “I love that program. I think it’s a good program to have, especially if you’re going in blindly like I am, because I have no experience in the theatre world.”

Greenwell also showered her fellow cast and crew with praise, especially her co-star Taylor and her director.

For sophomore theatre major Cameron Myers, who plays Karen’s fiancé Joe, acting would’ve never been in the realm of possibility if not for one of his high school teachers persuading him to play Peter Quince in their school’s production of the iconic Shakespeare comedy “A Midsummer Night’s Dream.”

“I didn’t want to be in theatre. I wanted to be in the Army,” Myers said. “At the very end of the year, she was like ‘I got a perfect role for you. You are this person, you need to be this person, Cameron.’ I said ‘alright.’”

Since then, Myers has fallen in love with acting and starred in several plays, including last fall’s production of “The Rocky Horror Picture Show” and last spring’s “The Black Boy in Pink.”

Myers said the Henry being completely student-run is remarkable, and likened the black-box theatre to giving an artist both a blank canvas and paint to create whatever they wish.

“It’s a place where mistakes can be made, where you can do great, you can find new things, you can realize new things, you can have epiphanies, doubts, anything you want,” Myers said. “That’s what makes it special is that it’s just one room. That’s it, but it has what you need, and you build off of it with what you want.”

“Children’s Hour” will run Oct. 28 – 31 in the Henry Konstantinow Theatre. The show is free, but seating is limited. To acquire a ticket, follow @insidethehenry on Instagram or reach out to a cast member.