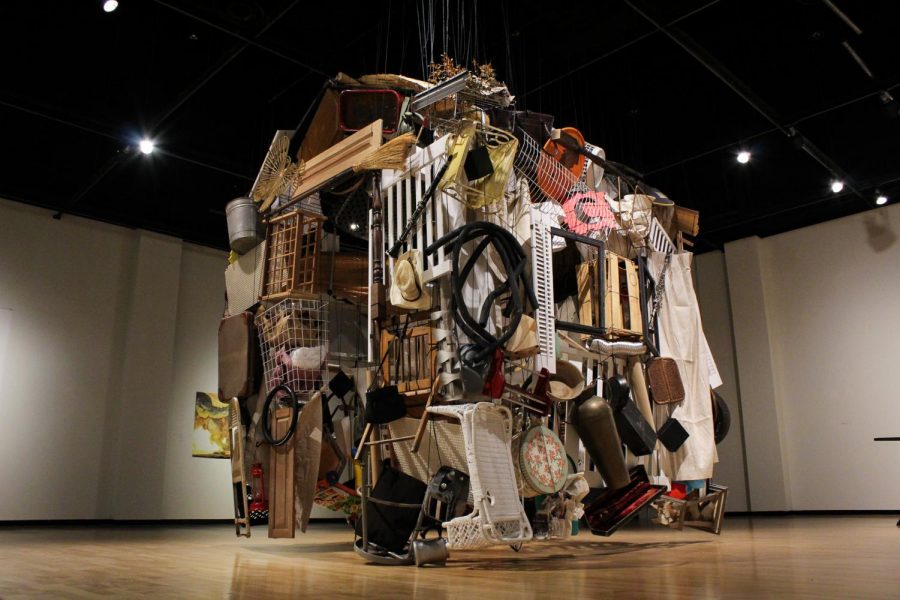 In the School of the Arts’ latest gallery, “Homecoming,” Hollis Hammonds imbues her past in her art, telling the story of her upbringing in Independence, KY. Hammonds, a 1998 NKU graduate and current Chair of Visual Studies at St. Edward’s University, wanted to highlight the shared American experience to want to hold onto objects and how the things we keep resonate meaning in others.

“This exhibit picks up on many sentimental moments and conditions related to that childhood experience, including the hoarder-like behavior of my parents, memories of playing in a forest behind my house which was filled with old junk, cars, and piles of wood,” Hammonds said.

Despite growing up without the luxuries of extra money, Hammonds said she describes herself as “a very happy and well-adjusted child.” She still longed for the white picket fence of the American Dream, and the consumerist spending habits that it represented. The death of her grandmother changed her thought process of physical wealth. Before, she embedded the memory of her grandmother in the objects that surrounded her time with her, but upon letting them go, she discovered that the memories lived inside her and not her grandmother’s material possessions.

“Eventually I decided to let go of the physical evidence, the consumerist artifacts, and cling to the memories of my grandmother through the recycling of materials as works of art,” Hammond said.

When Hammonds creates her art, she tells a story with the current version of her memories.

“Memory is constructed and every time that you think about something you are reconstructing it to fit with your new experiences. This falls into my obsession with fantasy versus reality, and how it’s a fake reality that we create, no matter how true it feels,” says Hammonds.

She tells part of her story through pieces like the “Dark Forest”, weaving words like “playing house” and “danger and wonder & junk” to express her child-like love for those woods and her adult understanding of the harm of overconsumption.

“It is the most illustrative version, like a cartoon illustration version of a concept,” Hammonds said.

The tragic loss of her home to fire marred her happy childhood of playing in the woods.  The experience still colors Hammonds’ art to this day, as seen in the “Smokehouse Day-Time” and “Smokehouse Night-Time” pieces. The vivid horror that she experienced as she witnessed the treasure chest of her childhood memories burning down expresses itself in “House on Fire # 2”. The decrepit quality of the ruins of her home juxtaposes the almost hypnotic slow build of the projected flames that consume the rendering of the crushed structure.  Even though her house no longer existed and she lost a place of many memories, Hammonds focused on self-realization.

“When my house burned down, the piles of debris were burned into my subconscious, but those physical artifacts didn’t define me or my health or my happiness,” Hammonds said.

Hammonds learned of her creativity early on by walking through the woods in her yard and “finding lost treasures” to turn into handmade gifts for her parents in order to save money. Her mother, a painter, and her father, a draftsman and builder, passed on the artistic spirit of making something out of nothing. This stuck with her throughout her childhood, despite only taking her first art class in high school. Hammonds continued her learning experience with art by attending NKU, where she started as a graphic design major before deciding that art fit her best.

Hammonds was a student of Gallery Director David Knight when she attended NKU and ended up teaching at several local universities before returning to NKU.

“She taught drawing here for a year and a half as a full-time faculty. She later became the Art Gallery Director at the Art Gallery in Cincinnati for a while, until she got a job in Texas as a tenured drawing faculty, and now she is the chairperson for the Visual Arts Program,” Knight said.

After creating art based on her own calamity, she later turned her focus to a similar topic.

“I started becoming obsessed with tornados, hurricanes and other natural and man-made disasters,” Hammonds said.

She explores this idea in her piece “Wasteland”, reminiscent of Dorothy’s Kansas after a tornado blows through the dusty area. Hammonds used the picture of her wrecked house in black and white to give viewers a glimpse into what her fifteen-year-old self saw and felt when she gazed at the ruins. According to Hammonds, the piece attempts to answer the questions, ‘I wonder what it means to lose everything?’ and ‘Am I less of a person when all of my physical possessions are taken from me?’

“My favorite part is the wooden structure with the objects stuck to it because it reminds me of the way that my parents hoard stuff. Hammonds came and talked to my class about natural disasters and how delicate a house is in comparison, so I can see the parallels between the two exhibited in this piece,” Robles said.

When walking through the exhibit, Hammonds asks viewers to break out of what she calls our solitary game of make-believe and to reflect on the memories that make us whole.