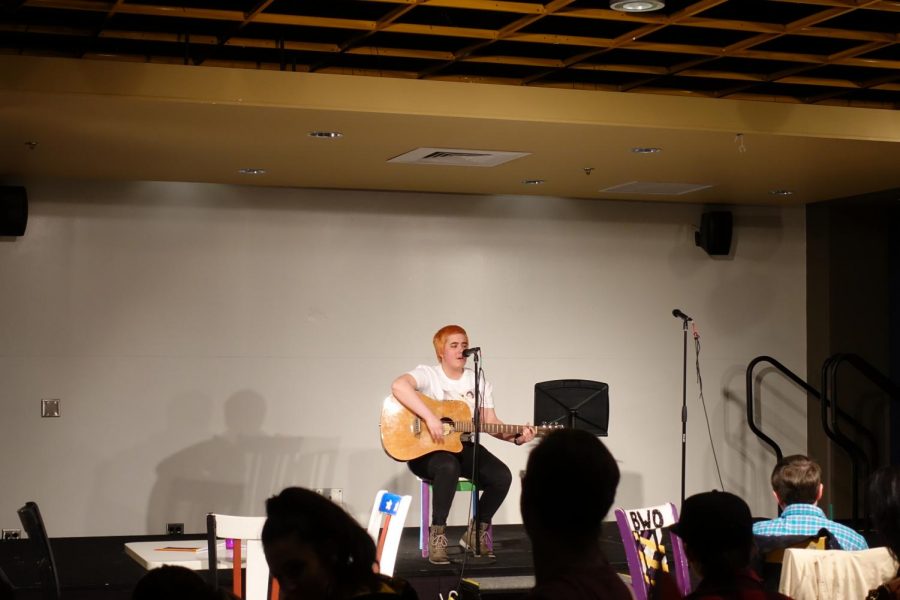 A student shares an original song at the 6th annual Open Mic Night.

Students, friends and significant others gathered to hear NKU students share their stories at the 6th annual Open Mic Night in the Student Union multipurpose room, as part of the annual Pride Week.

Writers including Emma Sanning, who shared her piece “Elephant Toes,” and Meredith Read, who shared what they called “a poem I wrote myself for myself,” were among the students who shared a variety of poems, freestyles, spoken word pieces and songs at the event. Isabel Sleczkowski, leader of the campus queer women’s LGBTQ+ organization Lavender Society, was the emcee for the event and also shared her own poem.

Sophomore computer science student Nathaniel Marcum, who got on stage and gave what he described as going on an “improv tangent,” had the crowd equally confused and laughing.

“I hope you have the gayest of days,” Marcum said at the event. “If you’re ever down in the dumps, just summon Exodia and just send that [expletive] to the shadow realm.”

“I remember a lot of the poems and artists from last year,” Marcum said. “Last year was like, half gay, LGBTQ poems and half racial and feminism kind of poems. This year, it seemed more skewed over to the LGBTQ side, which was, of course, awesome. I love every bit of it.”

LGBTQ Programs and Services, in partnership with campus organizations Lavender Society and Poetic Justice, brought in queer poet Katie Kramer as the event’s special guest. Kramer, who is a nationally famous poet and has toured over 400 college campuses to share her work, delivered a performance that was equal parts hilarious, thought-provoking and emotionally touching.

A rapt audience looked on as Kramer shared her life story with topics like her father’s struggle with cancer, her grandmother’s reluctance to accept her sexuality and the conflict she experienced in the LGBTQ+ community when she married a trans man. She amused the crowd with anecdotes like, “Y’all ever get FOMO? It’s like YOLO, but with way more anxiety,” and “The thing about grief is that it never sleeps; it is an all night party, and all of your bones are invited.”

“All three times that I’ve been here, I’ve just gotten to be in this room surrounded by a bunch of really rad queer folks,” Kramer said. “I really loved that there was an open mic beforehand because I like getting to share the space with other folks also reading poems and performing, so that was really awesome.”

She said that she’s met people at NKU that she’s kept in touch with over time, like Bonnie Meyer, the director of LGBTQ Programs and Services, Meyer’s partner and other audience members, which “doesn’t always happen on the road.”

Meyer praised NKU for always supporting the LGBTQ+ community on campus, saying that in her six years as director, she has received an outpouring of support from the administration, regents, faculty, staff and students. She said they see more people coming out every year to events like the Pride March or LGBTQ+ History Month events in October.

“I think that’s one of the beautiful things about NKU is that we support each other,” Meyer said. “NKU celebrates the diversity that we have on campus and they certainly support the celebration of [LGBTQ+] students as well.”

Meyer said that events like Pride Week are crucial because representation for LGBTQ+ students is important.

“It’s why we had the march on campus today. It’s why we have the rainbow flags, the bi flags, the pan flags and the trans flags all around campus,” Meyer said. “It’s about being visible.”