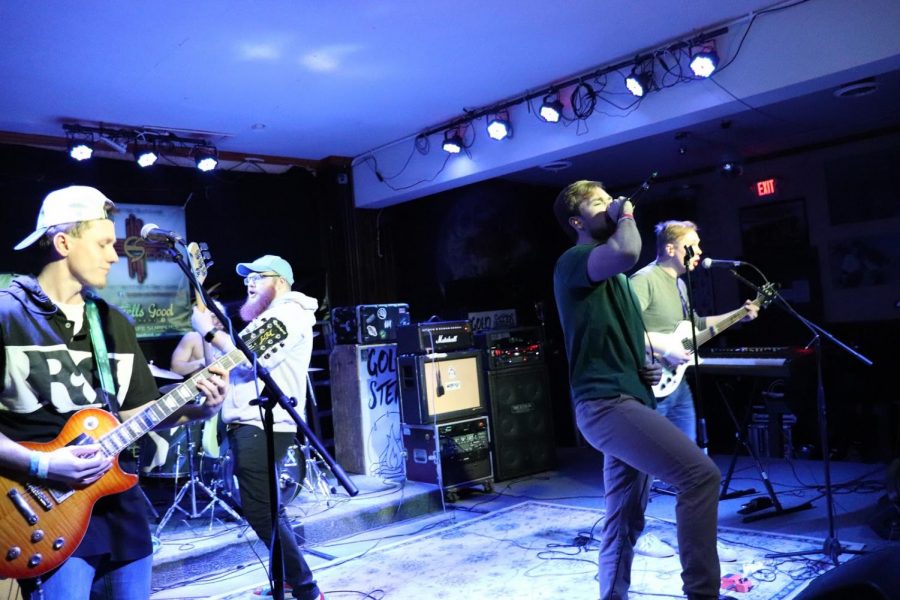 The stage is enveloped in blue-tinted light. When the music starts, friends and fans surround the stage with their hands above their head and their fingers in the shape of “LH.”

Lost Henry is the kind of band that instinctively gets you off your feet. There’s an urge to gravitate towards the center of the action. During that 20-30 minute set, it doesn’t matter who you are or where you come from; the only thing that matters is singing your heart out.

The band started as a group of four friends wanting to do a Slipknot cover for the Halloween cabaret, an evening showcase event put on by the theatre program on campus.

Their excitement about music afterward led them to write an original song, “Keep You Alive,” which was recorded on a laptop.

For the first cabaret of the spring 2018 semester, they performed “Keep You Alive,” but with a new member, Ben Eglian (lead guitar). The group incrementally improved as they played together more—usually at DIY shows hosted on campus.

One of these events was a free concert they held in the Stauss Theatre, and it was halfway during that show when the iconic “LH” hand symbol materialized in the crowd.

A group photo of everyone who attended, of which nearly all of them threw up the symbol, ended up being the cover art for their single “Misfit.” It later became the inspiration for the graphic displayed on their self-titled EP.

The band’s name is in tribute to the Henry Konstantinow Theatre, a small black box theatre in the School of the Arts building where they would often practice.

They are a dynamic group with a variety of influences and interests, both musically and socially, and that mix of perspectives is exactly what gives Lost Henry its unique sound.

While they started with a Slipknot cover, they’re not a heavy metal group. However, that doesn’t mean that influence isn’t there.

Lost Henry has kind of always been for everybody. We never want anybody to feel like they shouldn’t be a part of the show we’re putting on.”

“I will say the music we’ve been writing lately—it’s a little bit heavier,” Helwig said.

They make it a point to never force a particular sound and to never limit themselves to the confines of one genre.

The different social backgrounds of the members are key to the growing diverse community of supporters.

Helwig had connections to NKU Greek Life, Rich had connections within the Campus Recreation Center and Moss had ties to the Baptist Campus Ministries. With three members involved in theatre, they’ve received substantial support from that community of students as well.

“Lost Henry has kind of always been for everybody. We never want anybody to feel like they shouldn’t be a part of the show we’re putting on,” Helwig said.

Mary McNeill, a biochemistry and theatre double major and fan of the group, found community at Lost Henry concerts after moving here from Louisville.

With her involvement in both local music scenes, she noticed that this area seems to have more pop punk than the hardcore/indie punk scene she was used to in Louisville.

Their debut show for their self-titled EP was on Jan. 19 during the brutal polar vortex that swept Cincinnati and brought some midwest states down to -30 degrees Fahrenheit, yet they still nearly sold out the venue with the help of some other local bands playing that night.

“It’s humbling, it really is. I don’t know what bands I would do that for, quite honestly,” said Helwig.

Since then, they often see strangers wearing their merchandise and going to shows. Several students across campus have discovered the not so well kept secret of Lost Henry’s music.

You can check out Lost Henry’s music on all music streaming platforms, and you can watch their new music video for their song “Misfit” on YouTube.