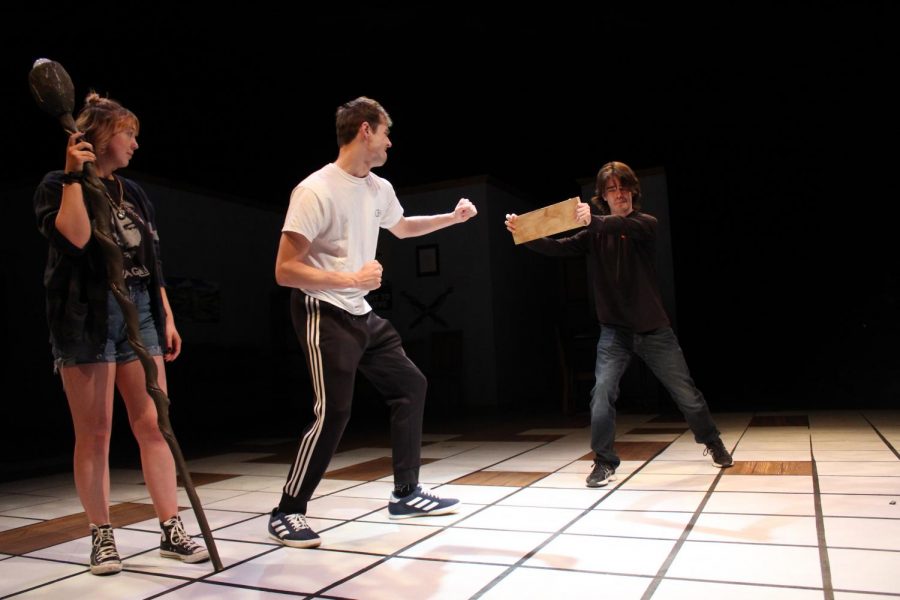 After failing his audition at NKU to join the Southeastern Theatre Conference when he was a college freshman, Jacob York is now returning to the School of the Arts at 36 years old to see the world premiere of his play “Initiative” as part of NKU’s biennial Y.E.S. Festival.

“My monologue was too long. Literally, at the final word of my monologue, they called ‘time’ on me. It was a real heartbreaker for 18-year-old Jacob,” York said, laughing.

After graduating, he auditioned at Ensemble Theatre Cincinnati, before deciding to move to Georgia to join the Atlanta Shakespeare Company.

“Initiative” is a play centered on a young man named David who is diagnosed with terminal cancer. With the help of his friends who play Dungeons & Dragons with him every week, he creates a way to live out the experiences he won’t be able to have through gaming.

For audiences who aren’t familiar with tabletop gaming, York said not to worry.

“It’s not about games. It’s about the stories that we tell each other to get through life,” York said.

Mike King, theatre performance professor and the play’s director, said that “Initiative” has unique qualities that set the show apart from other plays he’s worked with in his 32 years of experience.

“It just speaks very powerfully about loss. The struggle he has with his disease, and the one his friends have in trying to help him, all of that is painfully, beautifully written. But there’s also a great humor in it,” King said.

King said he’s surprised that more popular media doesn’t use Dungeons & Dragons as a springboard to tell stories, especially since the game has had such an impact on popular culture.

“Often, when you see D&D presented, it’s ‘these weird people playing this weird game,’ whereas all types of people enjoy it. So, it’s nice that this one presents it as part of these characters lives … It’s a very different approach to it,” King said.

For this year’s Y.E.S. Fest, the department sifted through 301 different scripts to find their official selections. King praised York’s playwriting ability, saying York’s experience as a theatrical performer helped him realize what works on stage and what doesn’t.

“One thing we find in a lot of them is that people who don’t know theatre don’t know the stage. They essentially write a movie, but call it a play. It would be almost impossible to get them on a stage,” King said. “I’ve never had that problem with this show. He knows what’s possible and what people can do.”

Senior Brandon Critchfield, who plays the lead role, is excited to finally work with Mike King on a play. Even though King was his first collegiate acting teacher, he hasn’t been able to work on a play with King until now. In preparation for the show, one of NKU’s professors set up a Dungeons & Dragons campaign for Critchfield and the rest of the cast to familiarize themselves with the game and have a better understanding of how it works.

“I think that was one of the best nights for our cast because it made our characters no longer just characters. We understood the characters as each other; we could bring those elements from our own game into our performances,” Critchfield said.

Critchfield described the role as challenging, saying he often had to go against his instinct on how to perform most of the play’s important monologues.

He said that a lot of the lines come off as despondent in the script, but that the play’s overall theme is gratitude for our friends and the time we are able to spend with them, so he has to think about how he would say them from a positive perspective, and used his mother’s cancer diagnosis as inspiration.

“When she told our family, I was a kid, and it didn’t make sense,” Critchfield said. “But she never showed signs of weakness; she wanted to show her strength and enjoy her time left and it made her a stronger person–it made her time valuable to her.”

Just as he described the overall theme of the play as gratitude, Critchfield is grateful that he’s able to take on such a powerful role in his last semester.

“I’m really appreciative of the language that I’m getting to bring to life because it’s meaningful. It’s meaningful to everyone, as David’s character is someone that everyone has met in one way or another,” Critchfield said. “It’s a very real relationship that anyone can relate to.”

James Dawson, who plays Tyrone, said the play is set apart by the complexity of the human elements in the plot and described it as a story that “needs to be told.”

“I really don’t think I’ve been more excited for a show than I have for this one in my life, not just here at NKU.”

King detailed what theatergoers should expect from a showing of “Initiative.”

“[Initiative is] a really beautiful story about this young man and his struggle with cancer. And it’s not a maudlin show, it’s not weepy, it’s filled full of humor, imagination and creativity,” King said.

York, who has performed in several other major U.S. cities, like New York City, Nashville, Tennessee and Orlando, Florida, is thrilled to see his own play premiere somewhere that he already has so much history with.