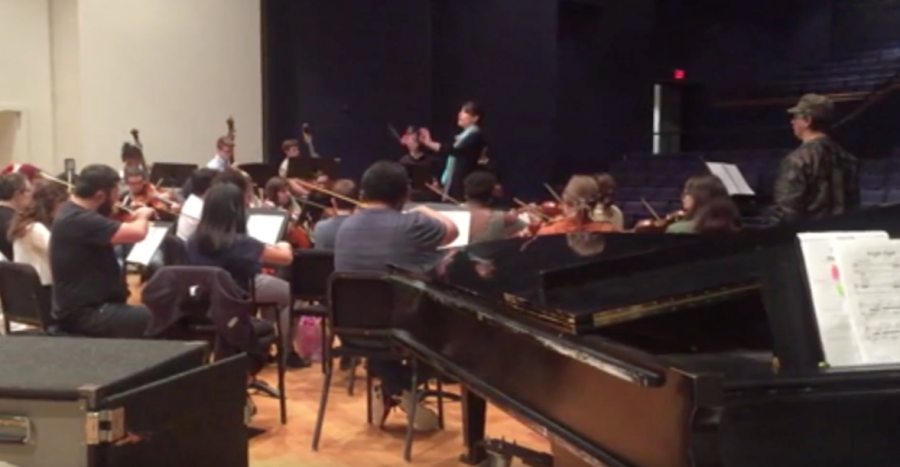 The preparations behind “Reel Encounters” is different than what the orchestra students typically do to prepare.

What’s the most important part of a movie? To the musicians of the NKU Philharmonic, it’s the score, and with their first multimedia excursions show they hope to show their audience why.

By holding this concert, NKU Philharmonic director and conductor Dr. Amy Gillingham hopes to create an experience for people, who may never find themselves at an orchestra concert, by making it more accessible to the general public.

“It will be a fun family night out, and it will be like going to the movies, but instead, having film and a live orchestra,” Gillingham said. “There will be film, multimedia and live actors, as well as the orchestra. And then to really complete the experience, we have popcorn and pop for families.”

This event will be free to the public, although a ticket will still be required.

“What we really wanted to do was make it free, so people wouldn’t have any limitations there…and be really invitational and give tickets to people that maybe wouldn’t normally be able to go see an orchestra concert,” Gillingham said.

The preparations behind “Reel Encounters” is different than what the orchestra students typically do to prepare; working with live actors as well as learning their timing with imagery that will be projected around them, and working with their students running tech, learning their cues.

The NKU Philharmonic Orchestra was awarded the Strategic Investment Grant From College of Arts and Sciences. Because of the support they received the ensemble was able to acquire special rights  and music in order to make this experience a success.

Orchestra students have begun showing their enthusiasm for this show and all it has to offer.

“I think it’s important to be exposed to the arts in many different ways, not just orchestra, and I think that allowing yourself to come and see this, because it’s such a unique experience it’s not something you’re going to get to see again,” said Victor Cabezas, sophomore music composition major.

Cabezas will join other orchestra members as an actor during the piece “Wright Flight,” a selection about the Wright Brothers.

“It gives people a chance to do more than just a winter concert and a fall concert,” freshman biology pre-dental major Hunter Frazier, said. “You get a little bit more active in the orchestra…this is allowing the orchestra to expand a little bit…when people talk about ‘band’ they don’t really think about orchestra, because they weren’t exposed to it.”

Audience exposure to orchestra is one goal of their “Reel Encounters” performance.

“Reel Encounters” will be held at The Carnegie, 1028 Scott Street  Covington, KY on Dec. 7 at 7 p.m. Tickets are still available for reserve at The Carnegie and with Gillingham.