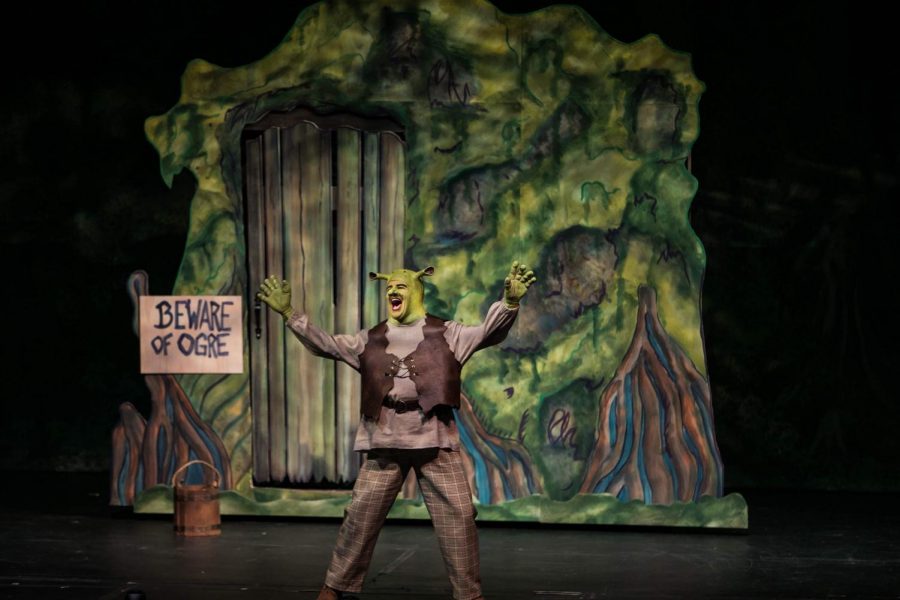 When Collin Newton was a kid, his grandfather told him he caught a leprechaun under a bridge near his house and that the leprechaun had to give him a gold coin to be set free. His grandfather would pull out a gold coin at the end of the story as a token for Newton and his friends.

Newton, now much older and wiser, understands the magic behind his grandfather’s story might’ve been an act. But the senior musical theatre major decided to tell it in his own way, using inspiration from that memory to summon his character in NKU’s fall semester musical: “Big Fish.”

“It was really special for me and I think that helped [the audition] come across well for the role because it’s very similar to the role I’m playing,” Newton said.

Newton started acting and doing plays in middle school, after previously playing the tuba in band. He decided he needed to make a change—crediting wanting to be involved in his church’s worship band as the reason—so he took up voice lessons to better his singing.

“It was something I wasn’t super confident in because obviously I could record myself and hear it; I knew it wasn’t the best, but I felt like I had potential,” Newton said. “I definitely wanted to more focus on that, to be able to explore the opportunities there.”

He started taking more classes that would help him better his singing skills. He told his dad that this was something he wanted to do, so his parents made it work financially. Newton said the moment his parents realized he was excelling in acting and singing was when he got accepted into the Governor’s School for the Arts—a three week summer program that allows young artists to explore their field and better their skills.

“[His parents] always supported me doing whatever was going to make me happy…they’re very supportive and they just want to make sure that I’m happy first and foremost,” Newton said.

When the time came to decide a college major, Newton knew that musical theatre was the choice for him but only applied and auditioned at a few schools for fear of rejection. At the time, he was upset to be going to a smaller theatre program, as opposed to prestigious acting schools like Juilliard or New York University.

“Dealing with that, mostly, was just opening my eyes to the fact that your life is how much you make of it,” Newton said. “Just because I’m going to this school doesn’t mean I can’t be successful. I’ve figured out ways to make sure that I’m growing.”

In the theater community, a “triple threat” is an individual who excels at singing, dancing and acting. Newton said he doesn’t consider himself one yet, but he hopes to grow in each area.

However, Newton still recognizes the importance of all three and how they all complement and build off one another in theater.

“…in a musical you’re acting, you’re telling a story, there’s dialogue; but you can’t express in words, so you need to sing about it. The melody gives it more emotion, more clear emotion,” Newton said. “In certain musicals, if you’re so excited you can’t just sing about it, you have to dance about it. And, so, it takes it to the next level of storytelling; it’s like tiers.”

McCafferty worked with Newton in the spring of this year for “Mourning the Creation of Racial Categories,” a documentary created by NKU sociology professor Dr. Joan Ferrante.

Newton joined the project to replace a dancer after they had filmed the dance portion for the documentary six weeks prior. The role he was playing was a tough one to tackle, according to McCafferty; Newton would be playing the part of a slave-owner.

Using the recording of the previous dancer, Newton taught himself the dance during exam week, McCafferty said.

At the end of the week, the dancers got together and incorporated Newton into the piece so that it could be reshot. After filming the dance twice, McCafferty said that Newton fit “beautifully into the piece” and that he was remarkable to watch.

“He took on this role and he did it under some strange circumstances and he did it himself, so he’s self-motivated,” McCafferty said. “And [he] obviously took the role really seriously, so I would say as a young man, he acts quite professional.”

Although McCafferty hasn’t had Newton in any of her classes yet, she said she’s watched him grow stronger as an actor through projects like this. She said Newton’s acting “grows from the inside.”

“I realized he’s opened himself up and that shows in his performance as well,” Milburn said. “In his confidence [and] in his singing, dancing, acting. He’s been able to unlock that stuff he used to hide away, in my personal opinion. It’s been really beautiful to see him shine in that way.”

Newton said that in every performance—whether it’s singing, dancing or acting—he tries to be in the moment, making the performance “fresh.” But after the performance, he said he doesn’t let the emotional weight of difficult shows get to him.

In his down time, Newton does things that are completely for him, such as going the gym or watching a movie with his friends or roommates.

“I balance by finding things that aren’t about my performance that I can, kind of, rest into,” Newton said.

A downside to theater is the the judgmental environments auditions can create, Newton said.

“You stand there in front of someone, you hand them a picture of yourself and they say ‘no, I don’t like you.’ That’s hard. It’s very critical,” Newton said.

Newton said that you should find ways to make yourself happy to help deal with judgment and criticism.

Although he might not land every audition, Newton said he’s happy with the effort he puts into each of them. At one of the final rounds of auditions for “Big Fish,” there were only five performers left, so Newton said he felt he did a good job even if he didn’t get the role he wanted.

Newton goes to bigger auditions when he can, so that it reduces his nervousness in time. Over the summer, he went to New York and auditioned for “Cats,” knowing that he wouldn’t pass the audition. He went because he said it was a way to be “seen in front of someone” and to help with the nerves by going one step higher.