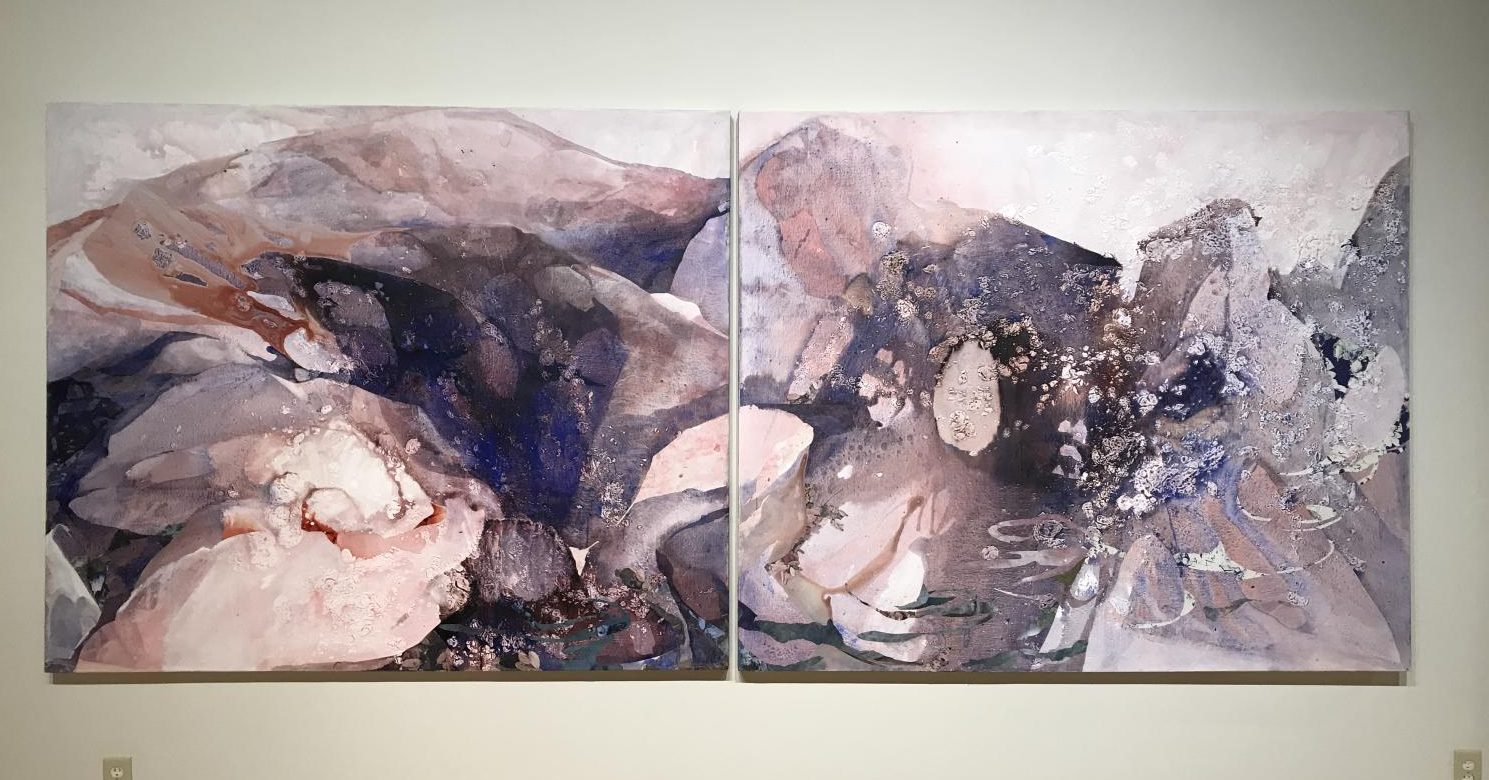 The beginning of Katie St. Clair’s artistic journey can be traced back to a picture taken of her furiously painting at an easel in the kitchen, picking up a brush before she even knew how to walk. She said it was the way her mom could keep her occupied, and soon she grew up as “the kid who made art” in her school.

She continued learning about art even when she began homeschooling as a high schooler.

“I think there’s a point where good teachers and mentors are really critical, but I think we underestimate how much we can learn from just our own awareness of the process of wanting something. It’s so amazing to just want knowledge,” St. Clair said.

St. Clair said that art became a much easier way for her to attain knowledge because of her dyslexia.

“It became my voice, and my way of expression,” she said.

Years of practice later, St. Clair’s exhibition, “Erratics: Neither Here nor There,” is currently on display in the SOTA’s Main Gallery.

The exhibition was inspired by St. Clair’s time at a residency program in Ireland, where she traveled after finishing grad school at the University of Michigan.

St. Clair traveled to Ireland to teach classes and knew that while she was there she wanted to make a big shift in her work. She didn’t know how or what it would be, but she knew the change would “have to occur in a really authentic way.”

To spark inspiration, St. Clair took walks through the Irish landscape. She fell in love with this unique, unfamiliar experience.

“At times it felt like being on the moon, because the limestone and everything is just so barren that there’s this feeling that it’s a totally new ecosystem,” St. Clair said.

Soon, she noticed something peculiar in this environment: turlachs, lakes that would appear and disappear, sometimes overnight.

She said water would rise up from the ground, holding a lot of pressure from the surrounding limestone until its  eruption.

“It looks like a water fountain coming right out of the ground, and empties out a huge lake,” St. Clair said.

Once the pressure goes down, the lake drains and disappears. St. Clair remembered getting lost around her home because of the shifting topography.

“I was walking down the road and I was like, ‘No, I’m definitely on the wrong road because there was a lake there yesterday, and now there’s not,’ and I was so confused,” she said.

Her next inspiration came after witnessing glacial erratics, or massive stones. St. Clair said some were even as big as cars, and she found herself fascinated by their origins.

She learned that glaciers move stones and deposit them in different landscapes. St. Clair realized that the rocks she was seeing weren’t  from Ireland, but from places far away and suddenly found herself building connections with them.

“Rocks that travel, just like I travel. It’s a really interesting similarity; I can empathize with a rock for the first time in my life,” St. Clair said.

The rocks were reminiscent of the entire landscape of the country itself. St. Clair described the jetstream that came from the Caribbean often brought debris from the islands onto the beaches of Ireland. According to St. Clair, it made the place feel “like it’s in between spaces, always shifting and never quite fully present.”

This concept of liminality is what inspired St. Clair’s work as a whole. She started following the erratics like “pinpoints on a map,” using them as directions while she kept exploring the terrain. As she did this, she learned more about the structures and fluidity of Ireland’s terrain.

“In Kentucky, you don’t trespass on someone else’s property. You don’t jump their fence or go walking around their yard, you’d get shot. But in Ireland, there aren’t the same rules about space,” St. Clair said.

She said you could spend the night in your neighbor’s yard in Ireland as long as you don’t bother their livestock. This was the first time she really understood how Americans create borders, and how flexible these borders were elsewhere.

Soon, everything she noticed began colliding and building off of each other. Before she knew it, she was making a whole series dedicated to erratics and their movement.

Her creative process further reflected these ideas of liminality and fluidity. St. Clair has done a lot of work mixing elements from nature, such as sand, butterfly wings and pine needles, with paint to try and mimic what she observes in the environment. She also experimented with the paint itself, such as dripping paint, heating paint or adding acetone to paint to see how it reacts.

St. Clair found more freedom in this kind of work than in her previous experiences in figurative painting and drawing.

“The amazing thing about working experimentally and working with forms of rock, I’ve found, is that every rock is different and all of a sudden there’s not a rule. If you mess up a person’s face while drawing it, you can tell it’s messed up,” she said.

St. Clair likes that, with rocks specifically, “you can’t actually get it wrong.”

Throughout her exhibit, St. Clair says that you can not only see the build up of all the experimenting on the canvas, but also you can see her own awareness of what was happening in nature and her attempts to mimic it.

“I’ll realize I can do that thing and then I’ll need to go outside again, for more inspiration,” she said.

David Knight, NKU’s Director of Exhibitions and Collections, said they chose St. Clair’s work to display because of the specific process she goes through to produce the work. He also thought that the connections her art made to science and the environment provided a bridge to other areas of the university.

Knight said St. Clair was also chosen because her work was selected to be on display in the new Health Innovation Center.

“We thought it would be a great precursor to highlight the artist that was selected for the mural that’s going to go inside the building,” he said.

St. Clair said the mural, which she said should be installed in October, is full of silhouettes from the botanical archives at the herbarium at NKU. She also met with a group of students, professors and a naturalist from the Civic Garden Center of Greater Cincinnati to go on a “native plant walk” to discover more about the local plants to be used within the piece.

St. Clair taught a stencil-making workshop where students dyed papers that she later used in the mural.

“It’s embedded with students’ work and students’ ideas. That’s really important to me that it’s not something I’m going to live with…it’s something that I feel like belongs to [NKU] as much as it does to myself and my process,” she said.

Throughout her creative experience with her exhibit, St. Clair “kept wondering what the rocks had seen,” and how different and short our own experience is in comparison. She hopes that those who come see her work get a better understanding of a scale of time and more awareness of our place in it.

“My hopes would be that people could leave with an understanding of, in the best of ways, our smallness in this amazing world and the need to show up, potentially, in small ways to benefit this environment that we live in.”

“Erratics: Neither Here nor There” is on display in SOTA’s main gallery until Sept. 21. On Sept. 20, there will be a gallery talk from 4-5 p.m. and a reception from 5-7 p.m. For more information, please visit https://www.nku.edu/academics/sota/art/galleries/schedule.html.