“Peter and the Starcatcher” to set sail in the Corbett Theatre 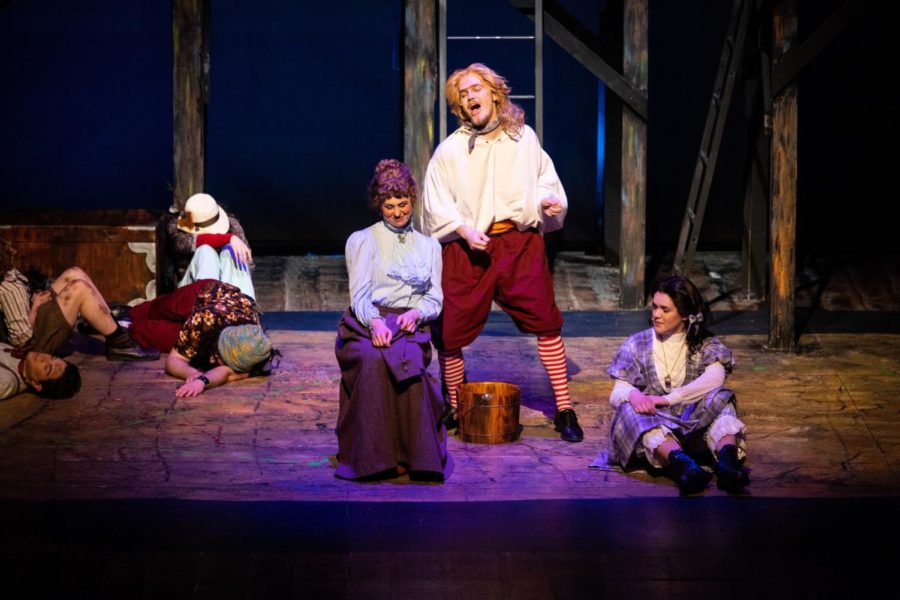 Gallery|4 Photos
Emory Daivs
The show features many musical and movement based numbers.

Hold on to your pirate hats, as “Peter and the Starcatcher” is running this weekend for its final showings in the Corbett Theatre.

“Peter and the Starcatcher,” adapted by Rick Elice from Dave Barry and Ridley Pearson’s 2004 children’s novel, tells the backstory of how an orphan boy named Peter turns into who we know as Peter Pan.

Throughout the show, you get to see how this story unfolds through elements of music, singing, acting and movement. The show also features many different kinds of technical elements from not only the costumes and wigs but also through the set, which feature a playground-style pirate ship.

Hannah Bevan, a senior musical theatre major who plays Molly in the show, discussed how getting to do this show in particular has taught her lots of things, from playing someone who is seven years younger than she is to keeping a rapid-fire pace. Bevan added how the role came with lots of dialogue to memorize.

“I think one of the hard things in the show is there’s a lot of dialogue and it goes so quickly because it is supposed to be funny, and you have to keep up with the pace,” Bevan said.

Bevan mentioned a part in the show where she had to specifically learn how to speak in a Norwegian imitation.

“There’s one part in the show where I talk in Norwegian, where it isn’t actual Norwegian, however it took me over five days to learn. It was insane,” Bevan said.

Bevan, along with other people in the cast and crew, is not only a performer in the show but also a full-time student. Some members of the cast even have part-time jobs on top of everything else. However, Bevan explained how she can tackle this role among her other commitments.

“It is just about balance, trying to get good sleep, taking care of yourself and getting your work done,” Bevan said.

Chandler Murray, a junior acting major and Peter Pan in the show, explained how doing this show brought him new experiences as an actor.

“My favorite part is all of the lifts and falls. I think that it is a fun challenge, and you have to also act through that while being so conscious of your physical body doing weird things. That was really fun, and my actor brain got really excited that it was something I got to be able to do,” Murray said.

Other members of the cast like Barrett Minks, senior acting major and Captain Black Stache in the show, mentioned how doing the show requires lots of stamina and focus on stage.

Minks added how he hopes that when audience members come to see the show they can not only have fun but also tap into what it felt like to be a child.

“I hope they have a good time. I hope they laugh. I hope we warm their hearts, and I hope they rediscover a sense of childlike wonder. That’s our biggest goal is capturing the feeling of a child,” Minks said.

Peter and the Starcatcher runs for its final weekend Dec. 7 to Dec. 11 in the Corbett Theatre. For more information, to see show times or to purchase tickets, visit SOTA’s website here.