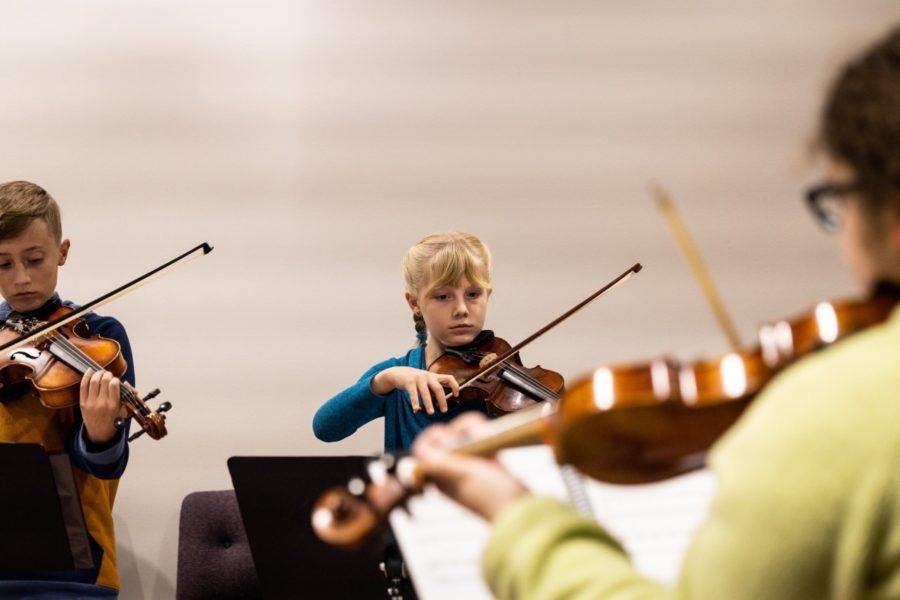 Reflecting on the NKU String Project’s impact 10 years in

Community members surrounding NKU have traveled to campus to learn string music with the NKU String Project for the last 10 years. Now celebrating this milestone, the program is reflecting on the difference it has made—and continues to make—through its offering of accessible and quality string music education.

The National String Project Consortium is an organization that brings community extension string classes to universities across the country. There are 39 currently operating String Project sites in 22 states nationwide.

The NSPC aims to simultaneously provide string education to areas in need and train the next generation of string educators through their assistantship program. The organization helps programs get off the ground financially by providing grants to fledgling String Project sites, gradually reducing its provisions over time.

NKU became home to a String Project site in 2012, integrating it with the School of the Arts Music Preparatory Program, which offers various community music classes to different age groups.

Creating the NKU String Project was a much needed boost to the local string music education system—only two school districts in Northern Kentucky have string programs, according to Dr. Holly Attar, director of NKU Music Prep.

“I think there are a lot of kids who aren’t participating in music, who might participate in music if the instrument they gravitated to were available to them,” Attar said.

Sisters Anna and Emily Stephens joined the NKU String Project as eight-year-olds in 2012, and now in its 10th year running, the freshman music education majors at NKU have returned to the program as teaching assistants.

The Stephens recollected fond memories of their time at the NKU String Project, saying that it nurtured their passion for music and bolstered their social development. Referencing some of the public performances they were a part of with the program, playing at places like grocery stores or restaurants, they felt rewarded by the genuine interest music garnered from people passing by, even those without musical backgrounds.

Now in their first year as teaching assistants, they find themselves gaining valuable, hands-on experience while helping to instill in others the love they found for music.

“The teaching assistants I had, I just thought they were the coolest people ever. They are who I want to be. So it was really groundbreaking to be like, ‘oh, now I’m that person,” said Emily Stephens.

The Stephens are an example of how the NKU String Project has served as a channel of local recruitment to the string programs at SOTA. With such a barren landscape of string education in the local public school system, Attar said that developing the NKU String Project did have strategic underpinnings to create students apt for the program in proximity to NKU.

“It was a way to cultivate our own students right here on our premises,” Attar said.

According to the NPSC, 81% of universities with a String Project have seen increased success in attracting music education majors.

Despite the vigorous program dwelling at NKU, pushing for heightened string education in public schools remains on NKU Music Prep’s agenda because of the limits of the NKU String Project’s limitations: program classes only meet twice a week.

“We’ve made our presence known at board of education meetings. I’ve had meetings with administrative staff at some of the local school districts. And they’re not against it,” Attar said.

Hefty expenses of string programs, accumulation of other important administrative tasks and a shortage of qualified teachers coupled with growing demand may be factors pushing the establishment of public school string programs to the backburner.

The NKU String Project addresses some of these barriers by providing an educational experience for class members and teaching assistants alike.

Junior music education major and NKU String Project teaching assistant Shelby Dodd described a supportive classroom environment. Class members get to interact with one another and play in both large and small ensemble contexts in a constructive but friendly environment. Teaching assistants get to lead small ‘pod’ groups, offer one-on-one feedback and observe the master teacher in an experience that gives them a sample of what the profession is like.

The two-fold educational mission of the NKU String Project—to offer string music education and produce string music educators—fills an immediate and long term gap in the local education system, hopefully sowing the necessary resources for music programs to flourish in the future.

10 years into its journey, the NKU String Project has welcomed 48-50 teaching assistants and countless students, according to Mendel and Attar.

To commemorate this anniversary, the NKU String Project is making strong efforts to play for new community audiences, having performed recently at the Spotlight on Scholarship event at NKU and Books By the Banks at the Duke Energy Convention Center, according to Attar.

The NKU String Project is also celebrating its history by inviting former master teacher Paul West to rework student composition projects into a composition for the entire program to perform at the end of the year.