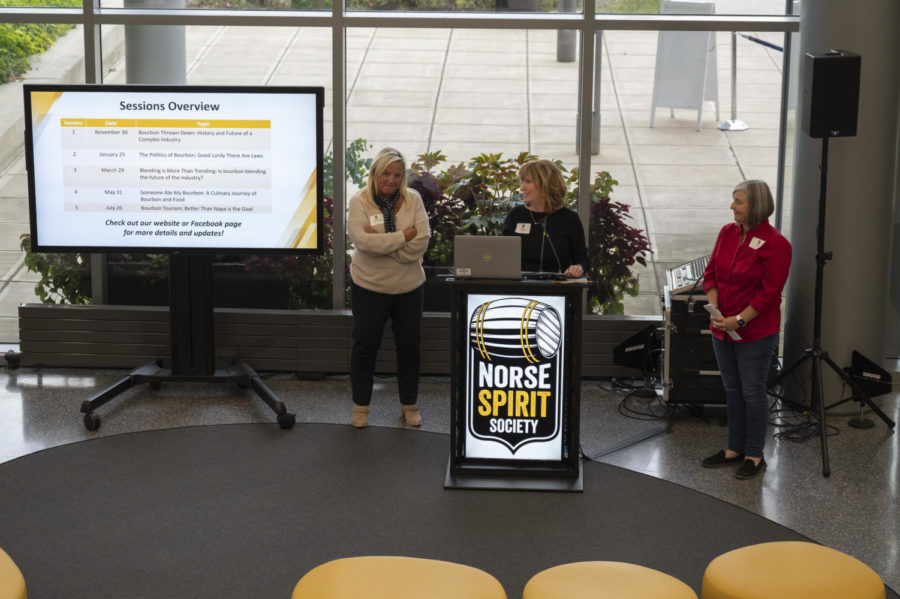 Bourbon and the state of Kentucky are inextricable. The alcoholic beverage that originated in Kentucky—home of 95% of bourbon production—has formed into a $9 billion dollar industry that generates over 22,500 jobs for the state.

Despite bourbon often being associated with the depths of mid and southern Kentucky, Norse Spirit Society is a program that proclaims the northern portion of the state’s significance to the industry.

Norse Spirit Society reaches into the community to educate members on the history, outlook and culture of the bourbon and spirits industry. The program costs $295 to join and consists of five sessions that span the rest of the 2022-23 school year into July.

Each class covers a special aspect of bourbon culture, consisting of an educational and experiential portion. Class sessions highlight the Northern Kentucky region’s contributions and engagements in the spirit industry, focusing on topics like the history and future of the industry, related politics, bourbon blending, food pairing and tourism.

Upon completion of the program, members will be awarded a token that grants them exclusive deals at B-Line stops—a self-exploration trail of craft distilleries in Northern Kentucky—invitations to members-only events and more.

The idea for Norse Spirit Society was spawned by Dr. James Buss, who currently teaches the Honors College course Bourbon 101: The History, Economics and Science Behind America’s Great Spirit. Buss has been an aficionado of bourbon since his days in graduate school, he said, and as a historian, a lot of research throughout his career has intersected with bourbon.

When Buss arrived at NKU about five years ago as the dean of the Honors College, he was surprised that the university did not have their foot in the game. Having seen other universities offer credentials in industries such as spirits distilling and beer brewing, Buss envisioned bringing a similar offering to NKU.

The program will include various expert guest speakers and provide materials to enrich the experiences and bring members up close with the people and trends that drive the local bourbon scene.

Bourbon-related activities compose about a quarter of the Northern Kentucky tourism sector, according to Buss.

Julie Kirkpatrick, president and CEO of meetNKY, pointed out Northern Kentucky’s unique position at the edge of the north and the start of the south. Complementing this geography is the placement of CVG International Airport in Hebron, which facilitates bountiful regional visitors.

meetNKY founded the B-Line—standing for “Bourbon” Line—a primary tourist attraction in the Northern Kentucky area and a convenient place to be immersed in bourbon culture.

Kirkpatrick said that prior to prohibition stymieing the industry in the 1920s, the Northern Kentucky region had a strong hand in the bourbon industry, with the Ohio River providing a port to transport the product.

In the greater scope of the Kentucky bourbon industry, the Northern Kentucky region is often overlooked. NewRiff Distilling, a distillery riverfront from downtown Cincinnati, is a young company working to change this narrative by instilling a strong bourbon-based identity in the community.

Their slogan, “A New Riff on an old tradition,” is representative of their mission to reimagine and share pride in the signature local industry; their participation in Norse Spirit Society was a decisive move to perpetuate that.

“A vibrant and robust education system like NKU helps to make a great community,” said NewRiff Director of Communications Amy Tobin. “The more that we can share what we’re doing here with bourbon enthusiasts in our community is only going to create a stronger bond.”

With the industry burgeoning in the region, creating a well educated community and employee base is key to supporting its anticipated continual growth.

The Kentucky Distilling Association, a nonprofit that aims to support and preserve the bourbon industry, has been investing in the future of the industry by launching certificate and scholarship programs partnered with Kentucky colleges like University of Kentucky, University of Louisville and Midway University.

With the momentum built off Norse Spirit Society, Buss says the goal is to grow the network between NKU and the industry. By presenting the opportunities that exist in the field and forging a place in the industry, Buss hopes that a similar program offering is in store for NKU.

“Students don’t really think about the industry as someplace to go to work, because it’s not something that they’re really familiar with,” Buss said. “There’s so many jobs right now that are open in the industry that require expertise in different areas: sales, marketing, chemistry, science, but they also require a little bit of knowledge of bourbon and distilled spirits.”

Norse Spirit Society is part of ENTERprise NKU, an initiative to strengthen networks between the university and the community by getting involved in the hearts of the local economy.

ENTERprise NKU plans to eventually launch similar programs in other flourishing local industries to paint the university as a leader of regional success and supporter of lifelong learning, according to Carmen Hickerson, Assistant Vice President of Economic Engagement and Government Relations.