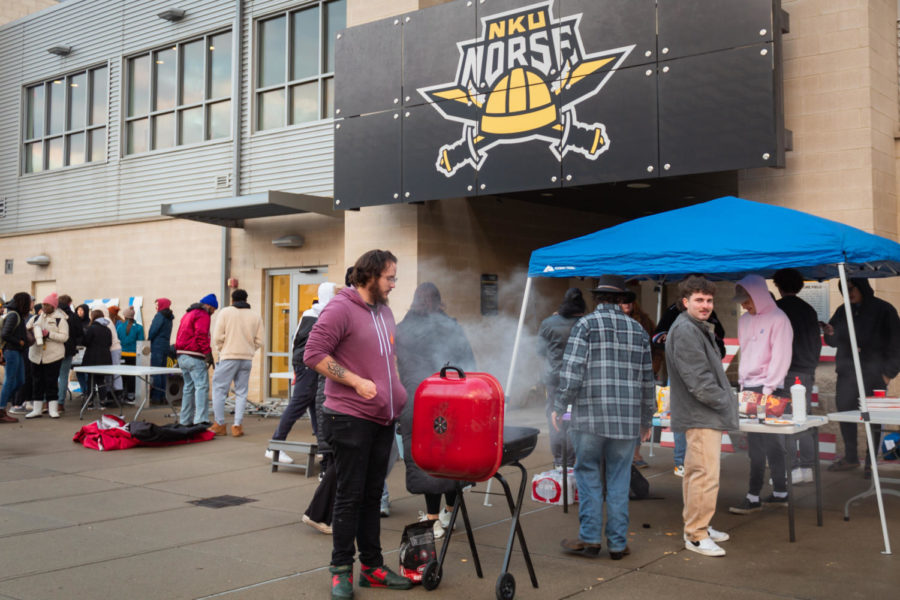 Students gathered outside the soccer complex adjacent to Truist Arena, setting up awnings and grilling before the game against UC.

A tailgate… at NKU!?

A Wednesday night tailgate for a basketball game in November was breaking traditions at NKU. It was something that has never been done before, but had great success thanks to the Department of Student Engagement director Brittany Jackson and assistant director Brandon Allen-Jolly.

Jackson and Allen-Jolly pulled inspiration from their own college days at University of Central Arkansas.

“The tailgates felt like a different world,” said Allen-Jolly, remembering the music, food, crowds of people and different student organizations.

Since the end of September, the two were planning for Nov. 16, making sure that this tailgate was a success. It all started with trying to find a place that would hold enough people, knowing that there was already going to be a large crowd for the basketball game against University of Cincinnati.

Alundis Pledge, assistant director of Marketing, was a great help in securing the soccer complex for the event. With not much other space available, the soccer complex became a great destination as it is close to the arena and would allow people to see the tailgate activity on their way into the game.

The tailgate activity consisted of eight Greek life organizations and the women’s volleyball team. These student organizations paid for their spot in the tailgate, brought their grills and cooked out in 30-degree weather to hype up the students before the game.

The organization fee to get into the tailgate helped to provide the DJ from Pro Sound A, and what is left is being put towards the Homecoming tailgate that will be taking place on Jan. 28, 2023.

There was also a tailgate policy that had to be followed by all organizations in attendance. This included fire safety, contacting local fire departments and letting them know about increased activity that day, providing open walkways and having the NKU police department present.

When it comes to tailgating, a lot of students wonder about alcohol. The same expectations apply at this event as they do every day on campus.

“We trust that our students will be safe and be responsible,” Jackson said.

After all of these arrangements, Allen-Jolley was nervous to see if all of their efforts would pay off with the high expectations; Jackson was excited to see how students reacted to the event’s success

Afterall, the success of the tailgate was really left to the students, as Jackson believes with every event held at NKU. Allen-Jolly claims that they are “just creating the opportunity and the space.”

Senior Delaney Fichlie, president of Theta Phi Alpha, loved getting to spend time with her sisters and interact with the fraternities.

“Getting to talk to people all in the community is great,” she said.

Fichlie also mentioned how easy it was to sign up for the event, stating that she just had to follow a link sent to her email to fill out information like the sorority card and if they were planning on bringing food. She also added that the DJ was a nice touch to the event.

Fichlie is planning on signing Theta Phi Alpha up for the Homecoming tailgate in January, especially if they move the event back to the Welcome Center lot. She feels like this location has better space for the different organizations to spread out.

All of the department’s planning paid off. Jackson said how accomplished she felt after the event seeing all of the students having a great time.

“Despite the hats, the gloves, the coats, I truly feel like it is an early September, 75-degree day. Everyone is definitely enjoying themselves,” Allen-Jolly said.

The night was a great success and may or may not have contributed to the incredible win for NKU against UC.