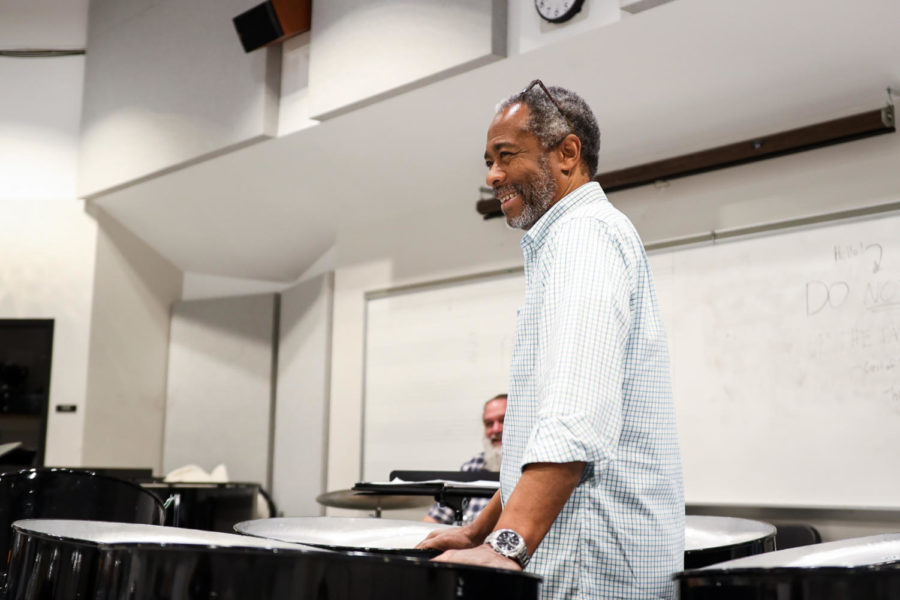 Gallery|3 Photos
Emory Davis
Student and teacher have a laugh during rehearsal in between run-throughs.

An NKU alum who hadn’t consistently played music since college. An adjunct faculty member of the music department who teaches piano and wanted to learn a new instrument. A man of Caribbean descent who yearned to connect with his roots. These are a few of the people that make up the NKU Music Preparatory Adult Beginning Steel Drum Band.

The Adult Beginning Steel Drum Band is open to adults in the community, regardless of their musical background. This is the first time the class is a non-credit offering, but teacher Stan Ginn has been teaching steel drums to enrolled NKU students for credit since about 2010, he said.

Steel drums are an instrument that originated in the Caribbean island of Trinidad in the 1930s. But something as simple as people banging on haphazard pieces of metal to play rhythms and pitches has evolved into a widely practiced and calculated art form.

Steel drums are a great place for beginner musicians to start learning, because it requires little precision and instrumental dexterity to produce pleasant sounds. Ginn reminisced on his days watching his three sons as he raised them through K-12 music string and band programs, saying that it “takes a couple of years before it really sounds a lot like music.”

Because of the skill and persistence it takes to acquire musicianship on devices like brass, wind and string instruments, steel drums are an apt place to start that will bode steady, immediate progress. Ginn deemed them an “instant gratification instrument.”

Providing this type of educational and expressive space to adult community members gives them an outlet to reap the host of benefits that learning music as an adult can sow, such as meditation and stress reduction, forging of new neural pathways, vitalizing interactions and a sense of accomplishment.

For Ginn, who has been a freelance musician and teacher for over 20 years, the pandemic sparked a personal revelation of the value of getting to share musical experiences with others.

“People will compliment me on a performance, and I’m like, ‘thanks,’ but we’re having more fun than you are,” Ginn said. “It’s more fun on the stage. It absolutely is.”

The time spent in self-reflection, doubting the future of his career, inspired him to place more emphasis in his work on teaching music to others.

After a Monday night rehearsal, the students admitted that skill and experience levels of the band members varied but agreed that the environment is welcoming and encouraging to all.

Ginn said he has been contemplating how he can create classes tailored to community members of different skill levels, but issues of limited equipment and space are badgering hampers on bringing this to fruition.

Steel drums are expensive instruments that require intensive hands-on labor to manufacture, according to Ginn. Because of this, most students, especially beginners, won’t invest in their own instrument and need a community space to devote time to practicing.

NKU owns eight steel drum instruments of different sound ranges, according to Ginn. This class has eight members, but Ginn also brings some of his own equipment for the band to use.

Limited practice time can moderate progress, both individually and as an ensemble, but for students, carving out time in their schedule to come to NKU and rehearse with the band is a fun and enriching experience, regardless of the challenges faced by the group.

For example, it can be hard at times for some members to get to class. Only three out of eight students were in attendance on Oct. 24, with many members notifying Ginn that they had other commitments.

But the goal is progress; progress that will culminate on Dec. 5 when the Adult Beginner Steel Drum Band class will perform at Greaves Concert Hall. The Steel Band and Percussion Ensemble composed of enrolled students will also play that night.

During rehearsal on the night of Oct. 24, Ginn addressed a student’s apprehension about having to play for a live audience despite modest progress, citing a memorable comment that resonated with him. The comment was feedback from an anonymous student on the semesterly course and instructor evaluation forms.

“Music is just music and nobody gets hurt,” he relayed to his students: a testament to the environment they’re immersed in and a reminder to remember why they are there.