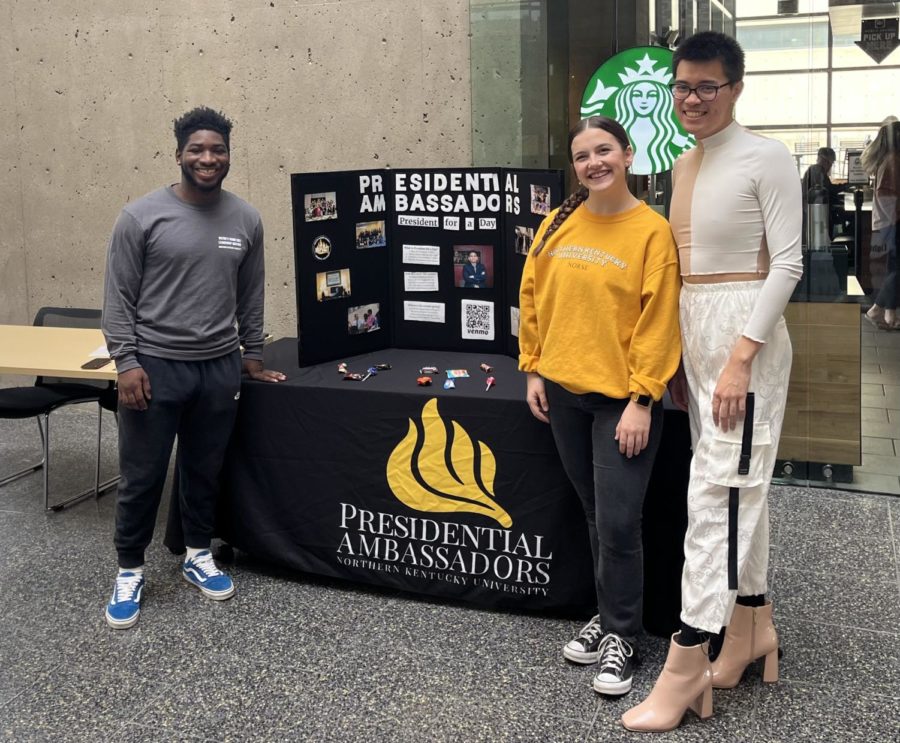 Presidential Ambassadors promote the fundraiser in the Student Union.

President For a Day fundraiser: Revival of a tradition

The fundraiser will accept entries until Friday at 1 p.m.

After a multiple-year hiatus, the President For a Day fundraiser has returned, offering a student the chance to step into the shoes of NKU President Ashish Vaidya for a day, and giving him a chance to zoom in on what life is like as a NKU student.

The Presidential Ambassador (PA) organization is accepting student entries for the contest until Friday Oct. 28. Entries are one for $1 or five for $3.

50% of the generated funds will be donated to Norse Violence Prevention, and the remaining half will be apportioned to the winner’s choice from a pre-approved list of NKU departments.

A group of 10 semi-finalists will be drawn on Friday Oct. 28; these finalists will receive a professional headshot. One week later on Nov. 4, three finalists will be randomly chosen. These three people will then be shouted out on the PA’s social media accounts, commencing their “campaign” of sorts. The candidate whose posts get the most engagement on social media will be crowned the winner, according to University Outreach PA Hanson Nguyen.

The day on which President Vaidya and the winning student hold the exchange will be coordinated to take place in the spring.

Traditionally, the winner of the contest has the opportunity to meet the president in his office, giving them a look at the inner workings of the indispensable administrator. They will get to examine the Office of the President at work, sit at the president’s desk and sit in on meetings that may occur that day.

For the president, the interaction with the student is intended to be reciprocally authentic. Vaidya will follow the winning student through some of their day’s tasks, perhaps shadowing a lecture, attending a student organization meeting or working a shift of an on-campus job.

Nguyen and Ginn agree that the exchange is an opportunity for the president to see through the eyes of a real student, coming in direct contact with their life and voice to hopefully be reminded of the student experience he strives to optimize.

Ginn graduated from NKU in 2016 and witnessed the tradition transpire before it went dormant for years, saying that in the past, it had been a valuable experience to share perspectives and strengthen connections in the community that needed to be renewed.

According to Ginn, PAs have been working to rally many of the traditions that simmered down due to the pandemic now that intermingling between community members feels more safe.

Looking ahead to the winner announcement, entrants have been reflecting on how they would capitalize on the experience.

Dylan Mull, a first-year student and fundraiser contestant, said that if he gets to swap roles with President Vaidya, he would give positive testimony about some of his engagements on campus, like Stego Studio at Steely Library, which he would hope to devote the remaining funds to.

Senior Alexandra Shugart, who also entered the raffle, said that she aspires to work in higher education down the line. When she heard of the opportunity, not only did its uniqueness grab her attention, but she thought the chance to peer into the responsibilities of high-level officials on campus and absorb their insight would be enriching.