Communication and controlled chaos: Behind the scenes of a concert at Truist Arena

Every year, Truist Arena organizes concerts hosting national acts right here at NKU. Here's how they do it. 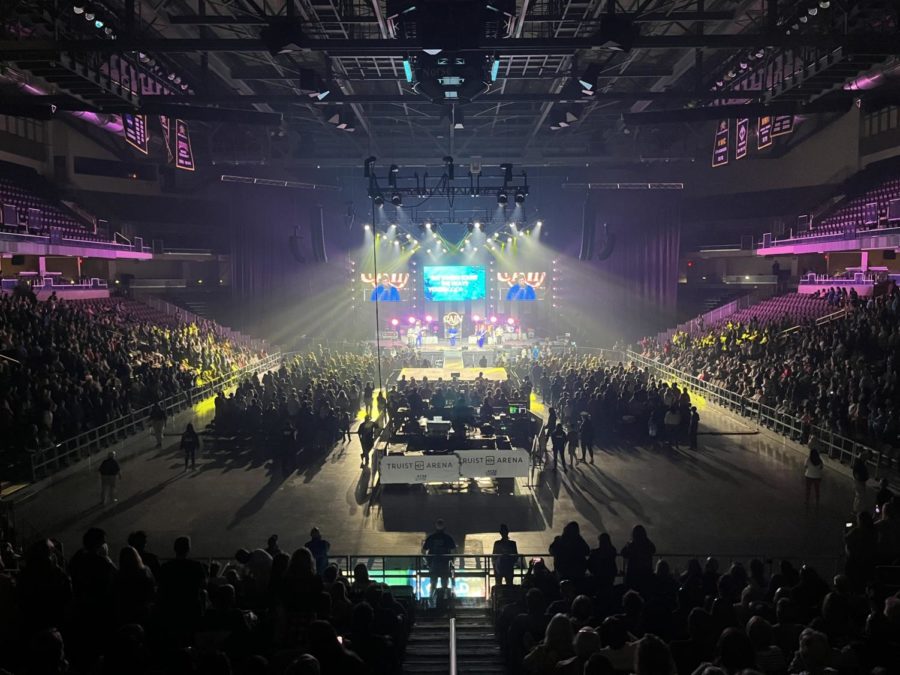 On the night of Wednesday, Oct. 12, NKU’s campus was winding down. Most students had gone home, were tucked away in their dorms or studying elsewhere on campus. But Truist Arena was bubbling, and had been for months, as it prepared to host Casting Crowns, Cain and Anne Wilson for their stop in Northern Kentucky on the Healer Tour.

The night before the show, from shortly after 6 p.m. to midnight, the Truist Arena changeover crew was active, according to Truist Arena Director of Operations Jake Free. With the tour load-in set to arrive around 8 a.m. Thursday morning Oct. 13, the crew needed to remove the hardwood basketball court, which the NKU women’s basketball team had finished practicing on around 6:00 p.m. that evening. While the floor was being removed, the stage was being constructed, and once the floor was completely upended, foldable chairs filled the floor as the arena took the form of a concert venue that would accommodate thousands of guests the very next night.

Ensuring this show could logistically take place required consistent communication and preparation between Truist Arena and the Healer Tour’s production team. Planning a stop on a national tour is a chaotic process that begins months in advance. According to Regina Hensely, director of Booking & Marketing at Truist Arena, she reaches out to about 85 booking agents and tour managers each month to learn about upcoming tours and shows and to express interest in being a destination on their tour routes.

Truist Arena is owned by NKU but operated by contracted event organization and venue operator ASM Global. Once an agreement between Truist Arena and the representative of an act is reached, the show is then advanced. The advancing process entails ongoing communication between Event Services at Truist Arena and the tour producers, according to Hensely. This process is essentially a back and forth in which both sides state their needs from the other party to ensure the show can be carried out in a safe, legal and well-ordered manner.

Critical in advancing a show is determining ticket pricing, seating arrangements and sound and lighting design.

Each tour provides their desired set up for stage production and seating. The arena provides the tour production team a “steel map,” according to Hensley. “Steel maps” are blueprints of the arena’s architecture, especially as it relates to steel beams that span the upper part of the structure. Since the tour production team handles the installation of their own sound and lighting equipment, they must have an understanding of how they can technically leverage the building to serve their needs and vision for the show.

When the tour decides on a seating arrangement and stage design, the plans are evaluated by the State Fire Marshal, according to Truist Arena General Manager Darren Stearns. Pending approval, the logistical possibility of a particular show being hosted at Truist Arena is set in stone.

Truist Arena’s Operations Department prepares the seating and stage for the tour production team the night before the show, so when they arrive the day of the show, the crew can install lighting and sound equipment that they travel with.

The Healer Tour show utilized a lower-bowl floor seating arrangement, meaning only the bottom section of the arena’s bowl seating was filled and chairs were set up in rows on the floor near the stage. The stage was designed to accommodate a “thrust,” or a smaller island portion, which extended from the main stage into the audience by a catwalk.

The Healer Tour arrived at Truist arena around 8 a.m. on Thursday, Oct. 13 in a squad of semi trucks and RVs and completed load-in–the process of unloading their equipment so they can begin designing the set. Hensley likens the chaotic nature of the load-in process to “ants on a cupcake.”

Once the tour production team starts setting up, a flurry of equipment is unleashed. An area in the middle of the floor is guarded off. This is called the “front of house,” according to Hensley, and it serves as a control center for the production team to operate the equipment.

Truist Arena works closely with a local production company that understands the nuances and limitations of the specific arena, which they highly recommend the tour production team to work with when preparing the venue for their show, according to Hensely.

During the tour production team’s set up, harnessed workers look down upon the floor as they traverse the steel beams in the heights of the rafters to set up sound and lighting equipment. Equipment is suspended and raised on cables to workers so they can be placed as planned in the advancing process.

On the stage, large trusses are rigged with light technology before they are lofted above stage.

While all of this is happening, merchandise stands are being set up in the concourse of the arena. Sponsoring the Healer Tour is Compassion International, who set up their own stand for fans to learn about and contribute to the organization.

This entire set up process builds toward soundcheck, during which the performers test their sets in order of their intended set times to confirm that everything is working properly.

Hospitality–compliments of Truist Arena–was provided in the “back of house,” an area underneath the lower dome seating of the arena opposite the stage where arena staff and members of the tour could go to sit and dine.

With VIP doors that were scheduled to open at 5:30 p.m. and general doors scheduled for 6 p.m, the tour production team and Truist Arena staff acted as a resolute apparatus to evolve the space into proper standing for a dynamic night of music, lights and gathering.

Admissions security for the event is collaboratively agreed upon by the venue, the tour production team and University Police. Stage security intended to protect artists and tour members, along with overseeing crowd conduct, is requested by the tour and staffed by the arena, according to Stearns.

As fans filed in, anticipation for the show started to brew. People lined up at the merch stand, bought concessions and eventually arrived at their seats.

Once the show started, eyes were fixed on the stage with fans erupting in cheers, singing along and dancing in the lively, wholesome atmosphere.

As the show wound down, the tour production team and Truist Arena staff kicked back into work mode. Seats needed to be cleared from the floor immediately after the venue was cleared of guests so that tour production could tear down their equipment and get back on the road to play in Columbus on Oct. 15.

Once the tour production team finished their load out, the arena that was briefly transformed into a performing arts venue obligatorily reverted to the home of NKU basketball, as the men’s basketball team would be welcomed back at 8 a.m. the following morning.

Working well into the morning, the Truist Arena changeover crew tore down the stage, racked up chairs and reassembled the basketball court.

The next day, Friday, Oct. 14, when the men’s basketball team arrived at Truist Arena for another day of practice, things proceeded as if nothing had happened.