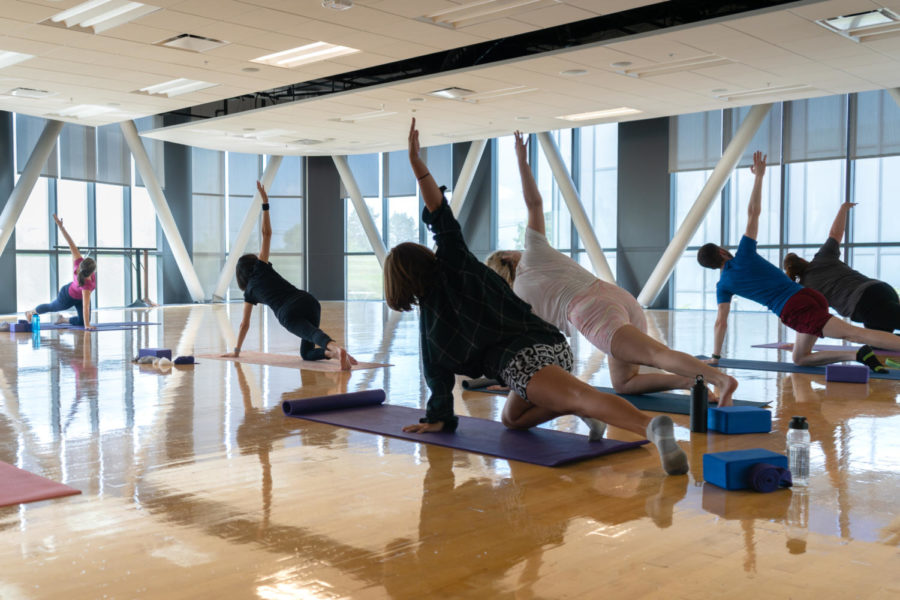 The program was first brought to NKU in the fall of 2020, funded by a federal grant through the Department of Justice program, Office of Violence Against Women, awarded to Norse Violence Prevention Center (NVP), according to NVP Director Kendra Massey.

NVP is a resource office and program at NKU that provides advocacy and support to victims of sexual assault, dating violence and stalking.

When NVP received the federal grant, an initiative to offer Trauma Sensitive Yoga at NKU was written into the budget, according to Massey.

NKU Campus Rec yoga instructors were sent to earn certification from Trauma Center-Trauma Sensitive Yoga, paid for by the federal grant, according to Massey. Phoenix Wilson, who has been a yoga instructor for over 20 years, has taught the class this semester.

The TSY class series was not offered last year because of budget renewal and approval processes bottlenecking funding, according to Massey, but it returned this year with a fall and spring series. This time, the class series was offered in collaboration with the College of Education. With NVP and NKU Campus Rec both housed under the Division of Student Affairs, this move was made to expand reach into the academic realm of NKU, Massey explained.

Trauma survivors are inclined to experience physical and mental symptoms of stress and discomfort that are beyond their control. This is because the sympathetic nervous system–which activates the “fight or flight” response–is more sensitive. Trauma stifles the nervous system’s ability to self-regulate, disturbing its interactive, balanced relationship by inhibiting the parasympathetic nervous system, which normally activates “rest and digest” functions and relaxes a person after periods of stress, according to DBT and Mental Health Services, an organization that provides support and resources to people facing mental illness.

“A common response to trauma is to have a heightened startle response,” Massey explained. “Someone with a trauma history does not recover as quickly because their stress hormones are still coursing through their body.”

The form of TSY is designed to teach students physical strategies to develop a sense of control and empowerment in the mind and body. Other forms of yoga can push trauma victims to embody poses that rouse negative feelings and physiological responses associated with past experiences, Massey explained.

“The model is to have a safe space to feel and be present in the body,” instructor Phoenix Wilson said. “Oftentimes it can be really uncomfortable to be in one’s body after a traumatic experience.”

Massey also touched on other teaching methods that distinguish the practice, including verbal cues that give students plenty of time to prepare for subsequent movements, personal space and lack of touch, all strategies that work to create an environment where trauma victims can feel secure.

“It’s choice based,” Wilson said of TSY. “They choose what feels good for them in the yoga poses and in the practice through invitation.”

Wilson underscored the shift of emphasis of movements from external expression—common in traditional forms of yoga—to internal sensation and self-agency.

“It’s a space to cultivate a more positive connection or relationship with their own body,” Wilson said. “To bring attention or awareness back to the present moment.”

Campus Rec Fitness Coordinator Jimmy McMahon commented on other benefits of creating a safe, interpersonal environment, saying that the class can also serve as a point of contact or support system for trauma victims by connecting people with similar struggles.

“The TSY was such a nice open space, yet felt so private,” said sophomore social work major Tara Asad, who attended a TSY session. “It was okay to just be, which is a huge deal to me.”