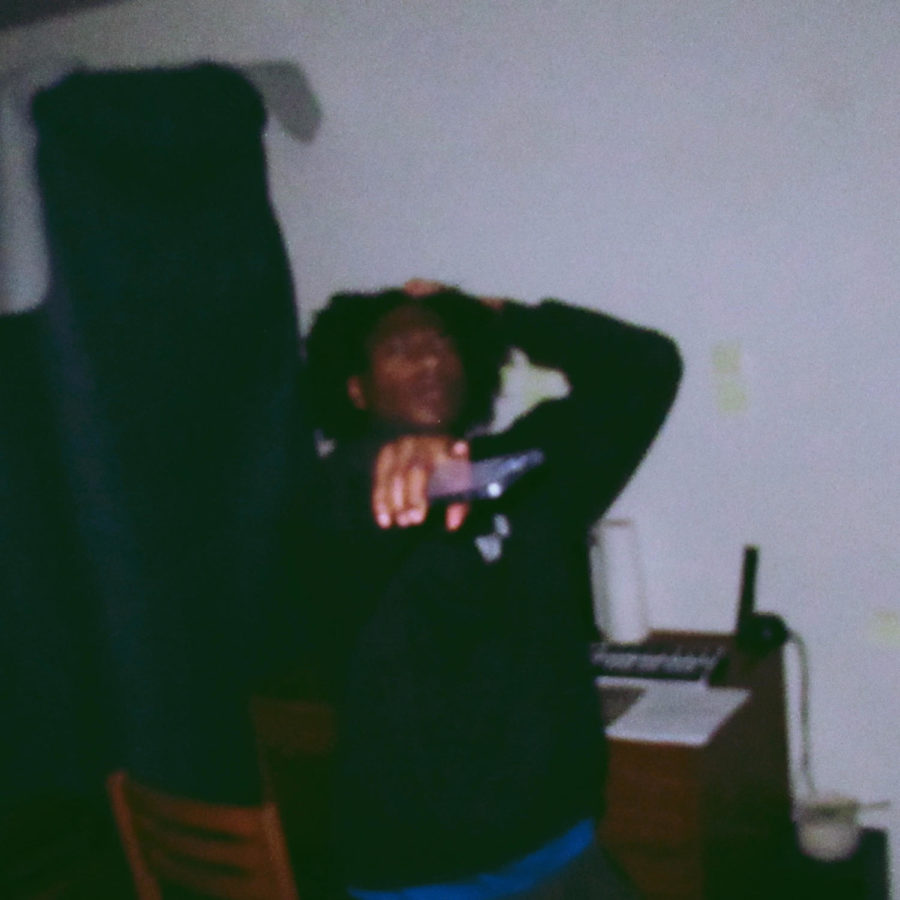 Inside the mind of Its.Jovahn and his forward-thinking new project

It’s rare that artist Its.Jovahn lets a moment slip; he’s always trying to learn from what surrounds him or express himself with insightful diligence. The 19-year-old rapper, singer and producer who studies entrepreneurship at NKU might be found in classes, chopping it up with peers, putting work into his businesses or writing and producing music; tethering all these endeavors is the mindset with which he does them.

Talking with Jovahn Allen in his dorm room, legs hanging off his bed while he twiddles a bedside rug depicting Tyler, the Creator’s “Cherry Bomb” character with his feet, it’s clear that his ambitions rise above what a college degree could get most people.

“I’m thinking about changing my major to accounting and marketing,” he said, adding that he feels like he hasn’t learned much from the entrepreneurship program that he hasn’t already learned from experience. His industrious attitude and will to work on his own terms to carry out creative ideas propels this contemplation; he wants to add the right tools to his toolbox.

“Life is too hard to say ‘no’ to everything as it is,” he said, reflecting on why he’s in college despite his ambitions to carve his lane in music and creative businesses. “A lot of people don’t get what they deserve.”

Understanding this grave fact is why he carries himself with such tact and multidimensional thinking.

On top of that, he is a versatile and powerful musician. His time in college, a pursuit some may view as a back-up plan, he has negotiated as a chance to network and learn skills to apply to his craft and pursuits.

His endeavors are colored by a desire for creative freedom and leaving a distinct impression on people that he crosses paths with; he has a knack for aligning his work to appeal to others without forfeiting his own interests. This tendency led him to devise his own unique format for his new project titled Pleights (Volume 1 Pt. 1/2).

“Pleights” is a word Allen came up with when deciding how he wanted to go about releasing music he had been working on; it describes the specific structure of a collection of songs. The philosophy behind it was to offer a curation of songs that leaves listeners on their toes but satisfied. A “pleight,” according to Allen, is a two-part body of songs released separately that each comprises two traditional songs, a song with a beat-switch built in and a spoken-word poem imposed on an instrumental. Presenting his work in this format, Allen said, was intended to be an artistic challenge that did not overwhelm listeners, allowing them to fully mull over the music while assuring more content is forthcoming.

“Whenever you eat, you don’t put a whole, whole lot on your plate because if you’re planning on getting more you, you just try a taste test,” Allen said. “You just get some, and if you want more, you can go back and get a second plate.”

Allen is astutely aware of the selective and transient attention that characterizes media consumer’s behaviors, and he uses this to his advantage in packaging his work to optimize its impact. He wants people to go into the listening experience free of expectations and to digest the content front to back to form an opinion.

Allen’s mindfulness of his audience reaches beyond how he chooses to release his music, but also in how he produces it. Once he grabs a listener’s attention, he wants to keep them fixated through stimulating and variable music. He carefully meditates on how to resonate with his listeners through his writing style, Allen said, often pondering how he can strike comprehension among his audience and avoid misinterpretation and confusion.

This consciousness of others’ feelings and behaviors and his urge to resonate with people speaks to his maturity as an artist and person. He practices deliberate self-expression in his daily life, using all outlets at his disposal to reflect his personality and essence—from his clothes to music to social interactions. His tunefulness with himself is evident on the song “Poem: Forgive Me,” where he details battles with himself and a will to charge forward despite bleak thought patterns that recognize personal flaws and the possibilities of pitfalls. Kicked off with jam house-style drums, claps and a dazing vocal loop, it gradually strips back to somber piano keys and prose, resembling a stark mood swing.

Allen grew up in Louisville, Kentucky, getting his start in music when his mother encouraged his interest by enrolling him in Amped Music Academy, an after-school music program. It was here he learned to produce music—it was by chance that he took up rapping. He was reciting lyrics that he had written for a song he did not intend to record when a mentor of his stumbled upon him while rapping, Allen reminisced. The mentor, impressed by Allen’s writing and rapping, pinned him with the task of performing it the following week. Having never planned on taking rapping seriously, this event was the impetus to Allen taking up the craft.

Once he saved up funds to purchase his own recording and producing equipment in high school, Allen continued making music, although his parents limited what he was able to drop, reviewing music he made and enforcing their permission before he released songs on public platforms. Although this scrutiny possibly fostered his intentionality in how he comes across, he would grapple with fears that he was lagging behind artists around his age that were already building fanbases.

“I would literally go to school, do homework in class or in the library before I had my track practice,” Allen said. “As soon as I got home: make music until one or two in the morning.”

It was this pattern of working at his craft any chance he got that helped him develop his style and skill as an artist. This was also around the time when he started connecting with other artists with similar tastes.

One of these artists was Audie Dixon–stage name mynameisaudie–a producer he met in high school. Dixon produced the track “Born In a City,” nestling buzzing guitar and gentle piano phrases within a vigorous bass line–the most direct and bold instrumental on Pleights (Volume 1 Pt. 1/2), which serves as a backdrop to Allen’s bars about the two’s hometown of Louisville.

Dixon spoke on Allen’s evolution and versatility as an artist, telling a story of when Allen was playing unreleased music for him, first playing “Burnout,” a rhythmically springy song drawing influence from hip hop and Afro-Dancehall released in 2021, followed by an abrupt style switch to an unknown atmospheric, cloud-rap type song Dixon compared to Travis Scott’s sound.

“He’s gotten his range bigger, so he knows what to pull from where,” Dixon said.

Now attending NKU, his network built in Louisville remains, expanding into the Northern Kentucky and Cincinnati area. As an adult musician, trying to build a sustainable, firm spot in the music industry, he no longer faces the barrier of adhering to guidelines of his parents, but managing his various endeavors along with college is a challenge of its own, enriching though it may be.

Allen emphasized that his time in college is a chance to encounter different walks of life, which helps inform his music. Making music, he says, is an artistic process that forces self-reflection. He aims to realize sounds and messages alike–his formulating and catering these messages benefits from meeting and collaborating with new people.

But aspiring to sprout as an artist in college comes with the challenge of aligning priorities with ideal outcomes. Allen sees his time studying entrepreneurship as unproductive so long as the businesses he’s already invested in don’t prosper—part of why he’s considering changing his course of study.

Elijah Eke, NKU senior and an artist hailing from Louisville–stage name Ekknowledge—shares the exertions of eagerly wanting to take off as an artist but also wanting to invest long-term in himself through a college degree.

Speaking on Allen’s work ethic and natural creativity, Eke said, “He has a song called ‘Burnout’. Like, literally talking about being burnt out, and that’s me all the time. So I got to wait for my inspiration to sort of kick.”

Allen’s time balancing his endeavors and responsibilities through the past few years has taught him resilience despite tiresome assignments and elusive rest. On the second half of “Born In a City pt. 2 / We Gone See,” Allen creates a soothing dreamscape of staticky and entrancing synth whirls underlying croons that modestly touch on personal gains that could be better and moods that are volatile but not debilitating.

And on “Ain’t No Stopping Us,” he repeats the mantra-esque phrase over a lush arrangement of strings, vocal harmonies and punchy bass drum, as if affirming to himself that the ebbs and flows of life won’t knock him off his feet.

“At the end of the day, you know you’re going to be okay. I’m good enough to do what I got to do. So I just push past what I might feel, which I feel like everyone does that to a certain extent,” Allen said. 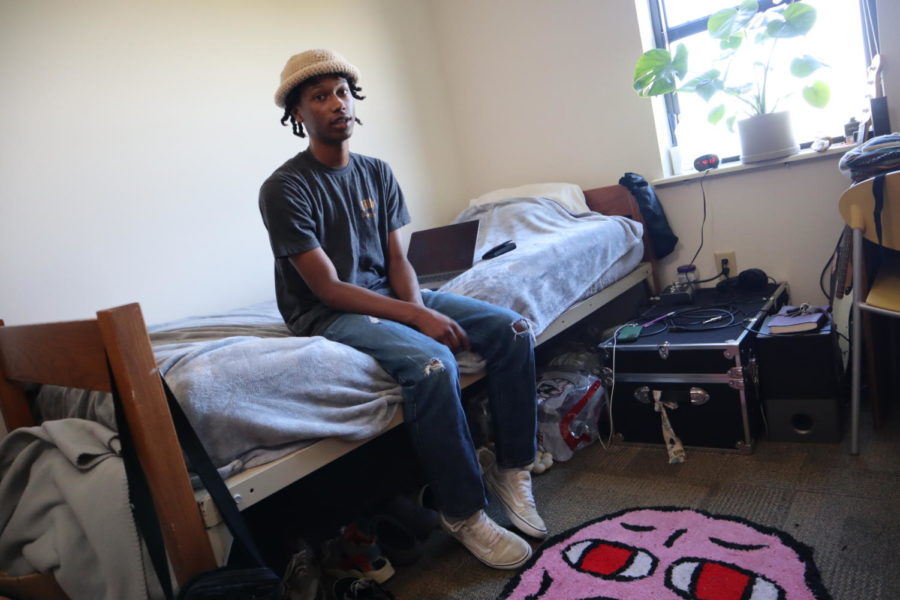