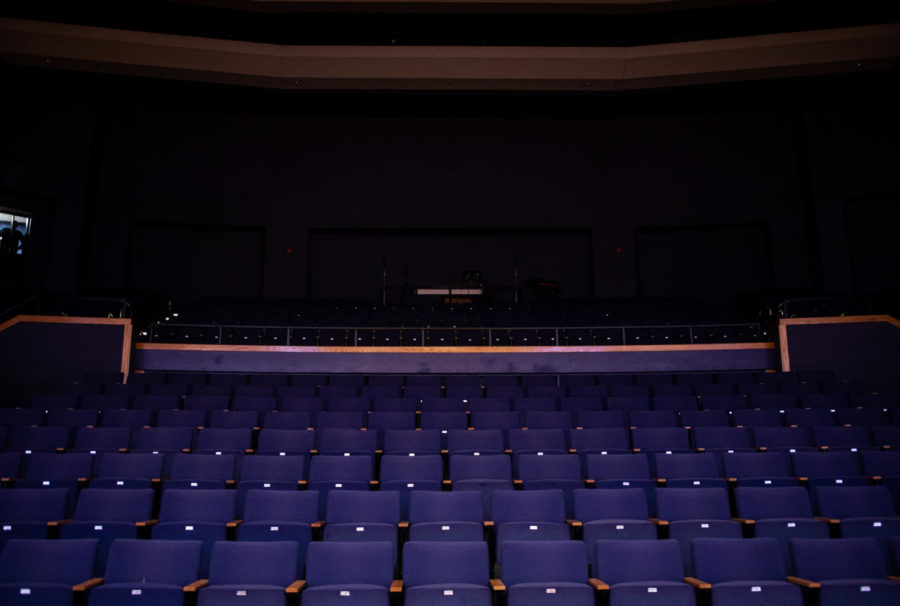 A look upon Greaves Concert Hall from the stage vantage.

Every semester, NKU’s School of the Arts hosts a series of concerts with ensembles of different sizes and styles taking the stage to showcase various areas of music studies in the program.

This year’s season is set to kick off Oct. 4 with a Jazz Combos performance at Greaves Concert Hall.

The concerts are performed by student ensembles that are linked to for-credit courses, some of which accept students across any major while others are reserved for music students by audition, according to Music Program Head Dr. Kimberly Gelbwasser Lazzeri.

Concerts are opportunities for students and professors to showcase the repertoires and expressive collaboration honed in the classes to audiences.

“I want them to start looking for the beauty of the music in all of the ink that is on the page,” responded Dr. Nikk Pilato, the recently hired Director of Bands, when asked what he wants students to take away from performance experience. “There’s the way that you can shape a phrase of music so that it doesn’t sound mechanical. If everyone did it that way, every performance of every piece would sound the same.”

Ensemble directors have the liberty of scheduling concerts and curating programs, allowing them to work with students on compositions that sharpen an array of important musical abilities and perspectives. When selecting pieces for his ensembles to practice and perform, Pilato said he evaluates multiple criteria: availability of musicians needed to play a composition, its difficulty to play and the diversity of the piece’s origins.

“The wind band world has suffered from a lack of diversity when it comes to the music that is played,” Pilato said. “It’s unfortunately something that kind of went on for decades and decades. And I wonder how many students who were black, Asian, Hispanic, female–they did not see themselves represented in the music they grew up playing.”

Not only does this philosophy help to bring equality into the world of fine arts and music education, but it connects students to different cultures and forms of music literature while broadening their repertoires and skillsets. The eclectic approach to music study brings enriching variation to the education experience as well as to the stage when it’s time to entertain an audience.

Preparation to pull off a successful concert does not just take place in the classroom; it requires hours of studying and annotating scores on the part of the conductor, tweaking the fine details to shape the ensemble’s performance into the vision being strived for.

“I tell my students, if you really want to know the score, then you spend about one hour studying per one minute of music,” Pilato said.

Work behind the scenes is equally essential, with technical aspects like lighting, audio and timeliness bearing the influence to make or break an audience’s favor.

Greaves Concert Hall is the primary venue for the assortment of shows with a select few shows being hosted at outside venues.

Greaves Concert Hall Coordinator Scott Slucher oversees the timely, smooth preparation and operation of the auditorium and its technology before and during a concert. This includes setting up the stage with the proper equipment for the ensemble, ensuring the venue is cleared for audience members, controlling light and sound technology and delivering a pre-show announcement, Slucher said.

Coordinating these concerts requires a constant line of communication between Slucher, the ensemble director and the front-of-house manager to ensure the admission of audience members is going as planned and sound adjustments are being made as necessary, he said.

Sound levels are balanced prior to rehearsal but are monitored and adjusted by a sound engineer during soundcheck and while the show takes place, according to Slucher.

“I have two people I work for: the audience and the students performing on stage. I want both to feel like everything is going right and if something is going wrong, they don’t notice it,” Slucher said.

A couple concerts throughout the semester will be hosted at off-campus venues, namely the Philharmonic Orchestra playing at Christ Church Cathedral Oct. 12 and the Holiday Choral Concert at St. Thomas Church on Dec. 4.

Organizing shows at off-campus venues is handled by ensemble directors, according to Lazzeri, as many faculty members have mounted valuable experiences and accomplishments in the music field, helping to forge a strong network that opens doors to sharing the experience of playing in new spaces with students and audiences.

“I think you even play differently,” Lazzeri said of providing students opportunities to play at new sites. “You hear things differently, because of the acoustics and the setup, but I think there’s also a sense of inspiration to being in a different space.”

These shows often grow into traditions between the external venue and SOTA, as was the case with Holiday Choral Concert, leading the show to become a mainstay for the fall semester slate of shows.

Some shows will host guest performers as well, lending to a dynamic atmosphere between musicians-in-training and professionals that can push student performers to rise to the occasion and parallel the merit exuded by featured musicians.

SOTA music concerts are set to kickoff next week and will be consistently offered throughout the semester, bringing an array of performance styles and genres to the NKU community, most of which are free for students to attend.

For musicians, performing for an attentive and appreciative audience is a high point of the art form that sprouts a sense of reward for the work that goes into the craft.

The diligent technical fine-tuning and rehearsal process that polishes an ensemble’s readiness for a performance precipitates a whirlwind of emotion, Pilato passionately explained, referencing with eagerness his first concert as Director of Bands, taking place Thursday Oct. 6.

“You start getting that cool, nervous energy that ends up helping you out,” Pilato said. “We’re not there yet. Right now, we’re in ‘hunker down, let’s get this fixed’ mode.”