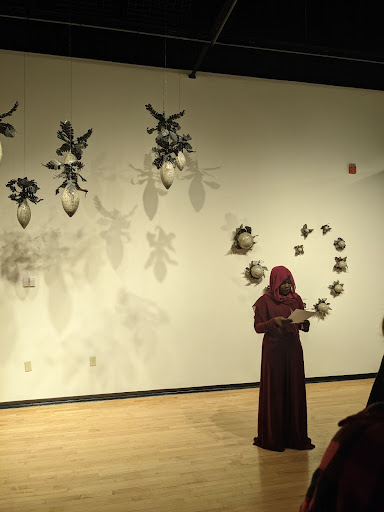 A tearful goodbye was in order for graduating senior Mariam Shaban as she took the floor during this semester’s BFA Senior Exhibition artist talk at Northern Kentucky University. Her exhibit “Lost in Wonder” serves as a reminder of the beauty of cultural awareness and the importance of persistence.

Shaban experimented with metal and clay as a way to incorporate two mediums into her installation. She noted that she only started working with metal her junior year at NKU and her mentors taught her that you can mix materials.

Professor of ceramics JeeEun Lee had Shaban for almost three years and Shaban has described her as being influential during the process of constructing pieces for the exhibition, from glaze to overall form.

“I teach ceramics, so I talked about how to develop pattern and form. Lots of glaze testing and she conducted a series of glaze tests. I wanna say that I was there [for her] not only this semester, as I almost had her every semester,” Lee said.

Professor of spatial arts in sculpture at NKU, Joshua Maier, had Shaban for four years and discussed that she is quite capable and open to constructive criticism. Maier discusses that there is importance in taking chances in art, just as Shaban has done.

“There’s great value in cultural identity that she chose to promote in her personal work. She took quite a bit of chances in materials that she wasn’t proficient at. Those kinds of things pay off,” Maier said.

Shaban explains that creating freehanded henna started on paper, then on body, and finally into the clay pieces presented in the exhibition.

Shaban took to henna quite young, as she wanted her own henna professionally done for Muslim events in her family. Instead of doing so, she learned to create henna herself and do it for other people. As she got older, she saw it as an opportunity to incorporate it within her art as a way to proudly display part of her Muslim culture.

Maier noted that Shaban’s work is a reminder that art does not have to elaborate to be beautiful.

This semester has been quite the struggle for Shaban in terms of personal boundaries and struggles. Nonetheless, she has been able to present her audience with a show that captures multiple aspects of her own identity, particularly through the designs featured.

Shaban described the difficulties she faced when constructing her art for the exhibition, as family issues arose, yet she was determined to finish the work she had started. This internal conflict was difficult for her to manage, she explained.

“I was having family problems at home and I was studying and couldn’t be there with my family. It was hard for me to focus. I was like, ‘Should I drop everything and just go home and take care of everything?’ I was putting the weight of the world on my shoulders,” Shaban said.

Through the struggle, she has had her older sister to get her through the tough times and persist. Shaban and her sister, who lives out of state, would call and complete work together to manage the workload.

Shaban reminds her audience that beauty can come from great pain and to not give up on the things that you hold close.

“We all have bad days, we all go through some things in life, but there is always a beautiful side to it, if you open your eyes,” Shaban said.

Lee explains that she hopes to see more of Shaban’s work after graduation and that she is persistent in maintaining her skills.

“This is just the beginning and not just the ending point. This is her first ever exhibition. I hope to see her continue to keep doing her work even after graduation,” Lee said.

Shaban explained that she has a difficult time with maintaining confidence in her work and a tearful artist talk resulted from the overwhelming amount of support she received from family, friends, and even total strangers.

“I have always kept to myself thinking that I didn’t need people or that people didn’t care for me. When the people I cared about showed up it made me realize how I couldn’t be here if it weren’t for them and that they have always believed in me even when I didn’t believe in myself,” Shaban said.

Shaban’s henna on clay reflects not only cultural awareness, but diligence even through tough times. “I can always fix broken things,” Shaban said. This message can translate beyond the realm of ceramics and into the real world of “broken things.”

The BFA Senior Exhibition continues until May 6, 2022 in the main gallery at Northern Kentucky University. For more information, go to https://www.nku.edu/academics/sota/art/galleries/schedule.html.