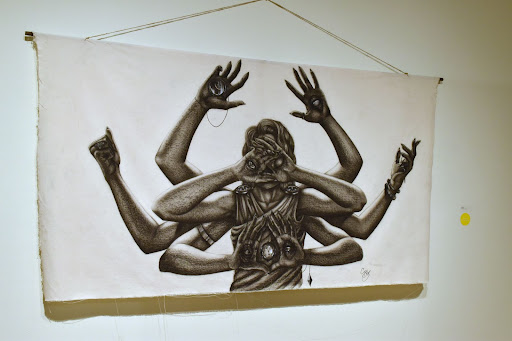 Oracle in the Juried Student Exhibition.

After completing Oracle during the pandemic and in the midst of family issues, VCD major Sydney Bryan was proud to showcase her piece in the exhibition.

As described by Bryan, the figure depicted is, ideally, an all knowing and all seeing creature of the outside world. Bryan felt the need to look out in the world as the seclusion of the pandemic became suffocating and overwhelming. This all seeing aspect of the piece has a personal connection to the artist itself, as she has struggled with her sight since the fourth grade.

“The oracle has an eyeball on each hand and I’ve been struggling with my vision for quite a few years. So, it’s just one of those things that I have been conscious of. Like, I am visually impaired. She has all these different eyes and eyes are usually a feature in my work, just to reflect that,” Bryan noted.

Being a fifth year at NKU, Bryan was undecided for 2 years before deciding on a major. She discovered that art was for her and being chosen for the exhibition validates that she is in the field she is supposed to be in.

Bryan notes that the first 2 years that she applied to the exhibition, her pieces were not chosen by the juror. Though this is the case, she persisted and was awarded Provost’s Purchase Award. Purchase award winners are given $1,000 and the artwork becomes part of the NKU collection.

Oracle took a trip across the country, as Bryan tended to her uncle in California and packed her piece with her.

“I got to work on and finish this piece at my uncle’s house [in California] and he passed away over the summer. So, I’ve got a really special connection to it now,” Bryan said.

The piece serves as a reminder that even though her personal struggles are depicted in the image, it also serves as a beautiful connection between her and her uncle.