Experiential learning competition seeks to include more student participation in the coming year. 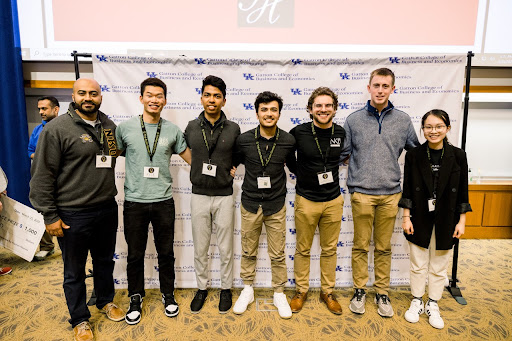 The Econ Games presents a unique opportunity to NKU students interested in building a community, competing among other universities, and furthering their data analytics, economics and communication skills.

The Econ Games, as described by senior participant Cornelius Smal, is an experiential learning event for university students to solve real world problems in a collaborative environment. The two-day event takes place every spring at different universities.

The event recently concluded at the University of Kentucky on March 24-25, 2022. NKU sent four teams to represent the university, one of which had the honor of bringing home fourth place.

Smal, who is pursuing a Bachelor’s of science in economics and international business, further explained the competition, saying, “Universities send teams to participate in the games, and everybody gets the same data set and prompt. At the end of the competition, people will present in their teams to the people who sponsored the data.”

Those teams with the best presentations continue advancing until a winner is selected, and job opportunities and scholarships are abundant. Fischer Homes was the data sponsor for this year’s event, and the sponsor, data set, and prompt change each year.

The Econ Games was created by NKU associate professor and director for the Center for Economic Education, Dr. Abdullah Al-Bahrani, in 2017. He created the event for the sake of students and validation that what they were studying was employable and enjoyable.

“[Students] realized that they knew their economics, but they had no idea how to apply it in the real world,” Dr. Al-Bahrani said.

The experience gained from the event is comparable to that of a lengthy internship, according to the professor. Through The Econ Games, students can see the application and pay-off from their studies.

Participants are also able to build a community with their fellow team members and faculty.

“You get exposure to data analytics and problem solving, but you’re building this community with your fellow NKU students and you feel like you belong,” said senior economics major Brooklyn Stephens.

This year’s competition represented nine different universities from across the country, including University of Delaware and University of North Carolina Chapel Hill.

The Econ Games will be held at Northern Kentucky University in 2023, which brings great excitement for the university. Dr. Al-Bahrani stressed that even though economics is namesake to the event, students representing all majors are urged to participate.

When asked about his hopes for the coming year, Dr. Al-Bahrani said, “I hope more students participate, more importantly outside of economics and the College of Business. We need as much of the communicators [and] the journalists as we do economists or data scientists. I’m hoping we can have a more representative team that represents the entire campus.”

Stephens participated in The Econ Games for the second time this year and shared its impact on her professional route.

“When I first participated in The Econ Games last year it honestly completely changed my whole life trajectory. I had no idea that data analytics was a world that was accessible to me,” Stephens said.

As Stephens prepares to graduate in May, she has received multiple job offers in the data analytics world. Participating in The Econ Games gave her a competitive edge over other applicants and a great perspective in job interviews.

“In my interviews, one of the main topics of conversation was The Econ Games because they loved the idea of an experiential learning program where students get to hone their skills when it comes to data and solving problems. Most of the time careers and employers really want problem solvers, and The Econ Games gives you those tools to become a problem solver,” Stephens said.

Smal pointed out the enjoyment derived from participating, even amidst a seemingly intimidating competition.

“[The Econ Games] is an unbelievable amount of fun,” he said. The time spent with friends before and after the competition, partaking in networking and accommodations adds to the appeal for those interested, Smal believes.

Both Smal and Stephens agree leadership and teamwork will prevail through participation in The Econ Games.

“I am a leader because of how much growth has happened in the last year, and I wouldn’t have had all that growth without participating in The Econ Games,” Stephens said. She is confident any student who makes the decision to participate will have a similar success story.

Any student interested in getting involved in 2023 The Econ Games can connect with Dr. Al-Bahrani at albahrania1@nku.edu. Professional development meetings occur every Thursday from 3:00-4:15p.m. in BC 359 and are open for anyone to attend.