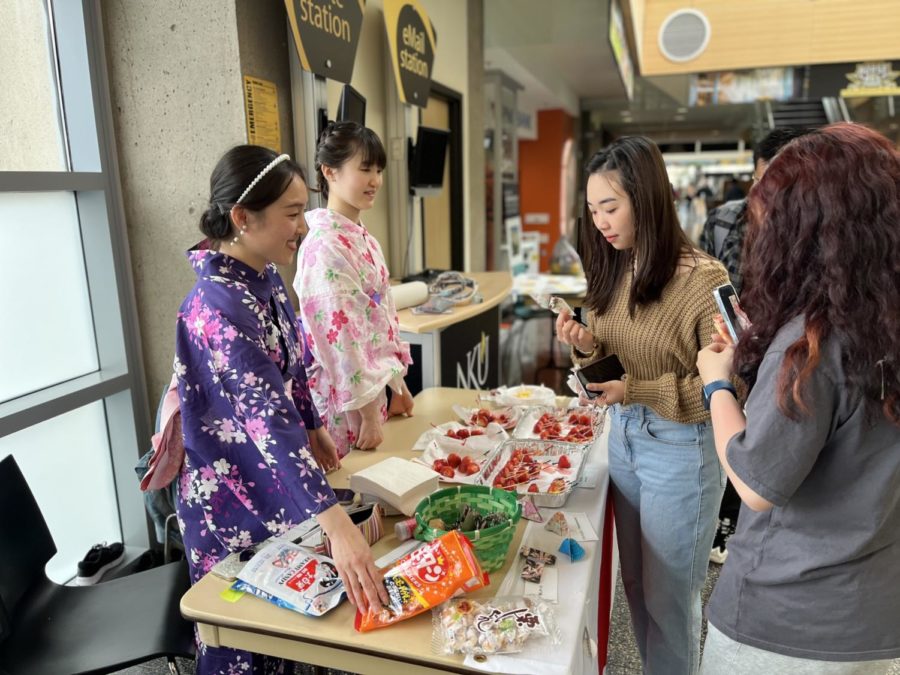 Snacks, language cards and other souvenirs are just a few of the things that you could find at the World Bazaar event hosted by NKU’s International Student Union Monday afternoon in the Student Union.

The event featured tables representing around 20 of the 58 countries and cultures of international students at NKU. Each country had its own section, representing countries from Latin America, South Asia, East Asia and even Europe.

President of the International Student Union and senior English major Phuong Le is excited to be able to help run this event and overall give students the chance to learn more about the countries and the international students from those countries. Le also added how important it is for her to spread her Vietnamese culture, as she was wearing a pink traditional Vietnamese dress for World Bazaar. She also hopes that this event can discuss some misconceptions about her country.

“Having a place to share my culture and let people know that Vietnam is existing. We don’t have war,” Le said.

Assisting Le in organizing and planning the event is Vice President of the International Student Union, Jose Fonseca Lopez. Lopez mentioned how he hopes that all students regardless of what country they are from can learn about someone else’s culture, as well as share a little of his culture from Honduras.

“Sometimes it’s a little bit difficult to showcase your country,” Lopez said. “This event really allows us to communicate our cultures to American people, and allows everyone to just basically get to know each other. That’s what I really hope that this event brings out, that people are able to meet each other and people are able to learn about each other’s cultures.”

“You’re always welcome to join ISU, regardless of where you are. Because we’re International. We’re just celebrating countries around the world. And the U.S. is also a country from the world,” Lopez added.

Among the many international students involved with the World Bazaar were Lea Gourlay and Emilie Haquet, both representing the country of France. Snacks, language cards and other personal belongings were just a few of the things to look at on their table.

Gourlay mentioned how she hopes that this event in particular can help students on campus know about the many different parts of France. Gourlay is from Brittany and Haquet is from Normandy.

“France is not just Paris. We had to show that because we are not from Paris,” Gourlay said.

Aro Rajaonah, junior economics and statistics major and member of the International Student Union, was excited to share his love of music at the World Bazaar. During the event, you could find Rajaonah with his guitar, playing chords that echoed throughout the Student Union. Rajoanah is from Madagascar.

Rajaonah mentioned how music speaks as a language in his culture, adding that most households in Madagascar have either a piano or a guitar.

“Music to me is a language that anybody understands anywhere in the world. Sometimes you might encounter this language and not really understand the words being said, but you can always feel the emotion that is played through those words,” Rajaonah said.

Rajaonah also added what the power of music meant to him.

“Music is also a way to gather people because anybody is attracted to beauty and music is included,” Rajaonah said.