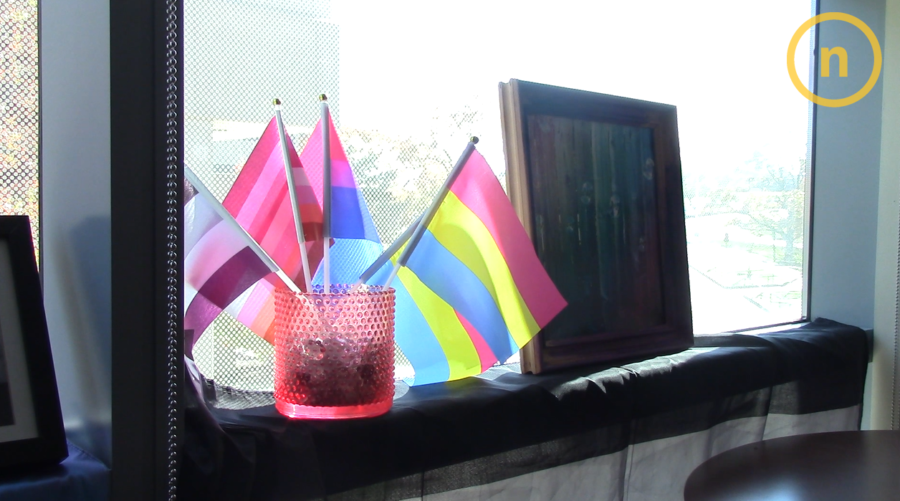 On Friday, April 1, Lavender Society, Friends Of Dorothy, and Common Ground hosted an event where the movie “To Wong Foo, Thanks For Everything! Julie Newmar ” was played in the University Center.

On Friday, April 1, Lavender Society, Friends Of Dorothy, and Common Ground hosted an event where the movie “To Wong Foo, Thanks For Everything! Julie Newmar ” was played in the University Center (UC) Ballroom on campus from 5-7 p.m. After Coordinator for LGBTQ+ Student Initiatives Alex Collins played the movie, there was a small discussion about the film.

There were about 20 people in attendance at the event. The event was initially supposed to be an Amateur Drag Show but then was later changed to a movie night.

At the beginning of the event, Collins lip-synced along with the song “Hello Rainbow World” from Centaurworld. Centaurworld is an animated dramedy that you can watch on Netflix about a horse that ends up in a world with different kinds of creatures.

Collins mentioned how watching a drag queen performance is like watching a moving piece of art, showing artistic choices with makeup and other performance aspects.

“Artistry is a huge thing in Drag, and it is basically a walking painting for a lot of people,” Collins said. “The amount of cool things that you can do with makeup and how you apply it really affects a lot of things, and then there’s that performance piece.”

The movie “To Wong Foo, Thanks For Everything! Julie Newmar” came out in 1995, prior to the legalization of gay marriage.. In the small discussion after the movie, the attendees talked about how amazing it was that the film was released when people of the LGBTQA+ community were viewed as a joke in movies and TV Shows.

“Drag is really about celebrating going against the idea of this gender binary and the general rules that exist, so Drag is really meant to perform up a lot of these characteristics that we see as gender norms,” said Collins.

One of the stars of the movie that was played was Patrick Swayze, a trendy male actor at the time. It is said that he fought for the role in this movie where he played a Drag Queen. It was exciting for attendees to see a predominantly male actor take on such a role.

Some people want to come to LGBTQA+ events to build a sense of community and be around other people who understand or try to understand the LGBTQA+ community itself.

“Especially for LGBTQA+ students on campus, I think it’s just another place that they’re able to go to be themselves and be around people who are, hopefully, like-minded and open to different ideas,” said Anna Wagner, the President of the Lavender Society and a sophomore Anthropology major.

If you are interested in participating in an LGBTQA+ event, the next available event is on Monday, April 4, where there will be an NKU Pride March on SU Plaza at 11:45 a.m.