A Return of the Opera with “Signor Deluso”

SOTA students set to perform a modern twist on a traditional piece. 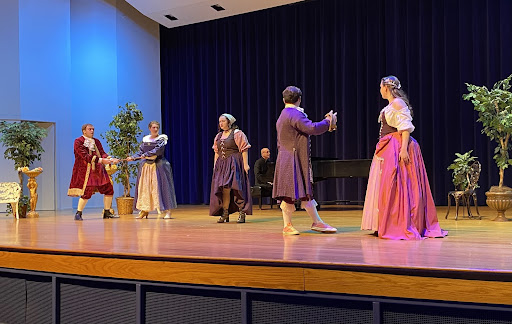 Anyone seeking laughter and great entertainment can find precisely that at the “Signor Deluso” opera on Friday and Sunday in Greaves Concert Hall. Audiences can expect boisterous opera-style singing, impressive acting and periodic costumes.

According to one of the six cast members and junior vocal performance major Katherine Sharp, “Signor Deluso” is a story of confused lovers and their intertwining lives. Although the duration of the opera is only 30 minutes, Sharp is confident audiences will be intrigued.

“So much happens in that short amount of time, and it keeps you so enthralled the whole time. You will want to see it again to try and piece together more,” she said.

“Signor Deluso” is a periodic piece set in the 17th century. It features some modern elements, though, especially when it comes to costuming. Sharp’s character Célie wears a long gown and corset, and Doc Marten boots complete the look. Another male cast member dons a long coat and stockings with bright pink Converse.

Sharp describes Célie as hopelessly in love with comically bad judgment. Over winter break, the junior was able to practice her role and determine her own ideas about Célie. Sharp found beauty in developing her character and then blending that role with her fellow castmates.

Jimmy Renton, cast in the role of Léon, described what makes this opera different from other SOTA productions. “Opera is way more dramatic,” Renton said. “Obviously there’s a difference in technique when you’re singing; you sing with more vibrato and round the mouth to form a good resonance. Singing in this round tone takes practice.”

Singing in this belty tone takes practice. The cast of “Signor Deluso” has faced three hour rehearsals leading up to the Friday premiere. Opera singers must practice individually as well. Renton attempts to get at least 30 minutes of daily practice to maintain his technique.

Performing in an opera is a first for freshman Zach Felts. While he had previous theatre experience from his high school days, “Signor Deluso” has pushed him far from his comfort zone.

Performing as the title character Signor Deluso, Felts took time to embody his role. Hilariously uncoordinated yet charming are two characteristics he channels when acting as Deluso.

“I really just tried to think of the most clumsy person I possibly could and amplified that by 10. [Deluso] is sweet. He means well, but it’s not unoften that he’ll trip over his own shoelace,” Felts said.

Overall, music education major Felts believes “Signor Deluso” is the perfect opportunity for anyone curious about SOTA performances to dip their toes in.

“It’s only 30 minutes, so it’s very much a digestible piece of opera if you’ve never really attended an operatic performance before. It would be a great appetizer for the opera world.”

Director and adjunct professor Audrey Chait shared the same sentiments. “Signor Deluso” is a comedy, which differs from other traditional operas. The entire show is in English as well, making it comprehensible for audiences.

“[Audiences] can expect to hear a kind of singing they don’t hear everyday, but in a language that they understand. It is sung by their friends, who, on the stage in their roles, become kind of superhuman,” Chait said.

She also pointed out that there are no microphones, just vocal projection in the show.

Chait shared a feeling of pride for the cast since this is the first opera for some of the cast members.

“There are a few students who have really come a long way and are now such vibrant and confident artists, and it’s really fun to see. For the people who have not been in an opera before, discovering what that means and how to inhabit that role is lovely,” Chait said.

“Signor Deluso” will be the first major SOTA production after the lift of the mask mandate at NKU. This increases the excitement for both cast members and audiences.

“We want to have a good crowd and fill Greaves Hall with some laughter,” Renton said.

Felts encouraged audiences to come for the great costumes, performances, set design, and awesome direction, and stay to support SOTA students and the hours of dedication they have put into the show.

The opera will run at 7pm on Friday, April 1 and at 2 p.m. on Sunday, April 3 in Greaves Concert Hall. For more information about the show and to purchase tickets visit https://www.nku.edu/academics/sota/events/news/2022/signor-deluso.html.