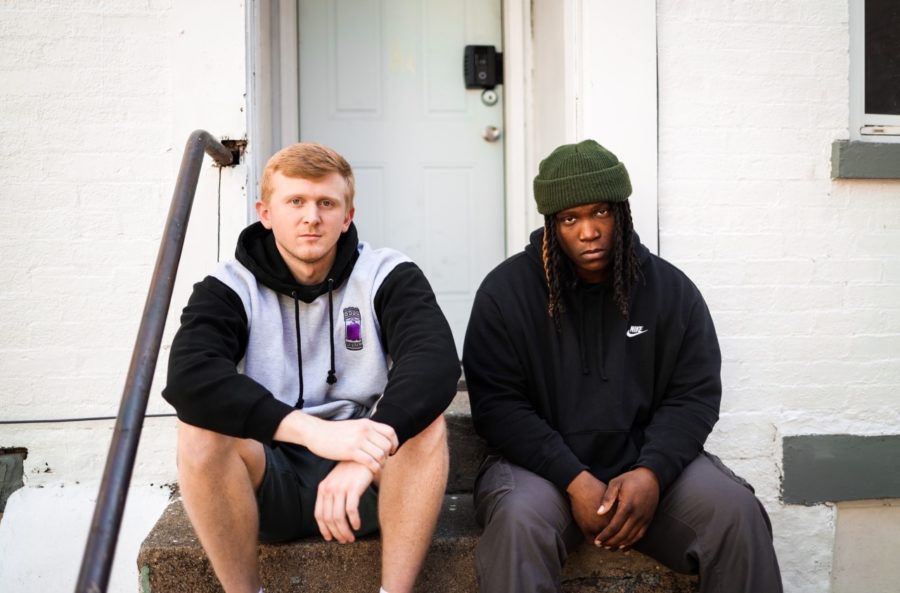 Elijah Jouett – a 23-year-old hip hop artist from Northern Kentucky who goes by E The Profit– has lofty goals for his music career. Like many young people raised in the Northern Kentucky and Cincinnati region, he has navigated a culture where the norm is valued and the unbeaten path is rarely trekked. Despite taking a route vulnerable to skepticism, E The Profit’s journey thus far has been one enmeshed in confidence, support and belief.

Being the product of an area with a lackluster hip hop culture, he has assumed the drive to represent Northern Kentucky and Cincinnati area and attract a spotlight to an area rich with talent.

“I want to be the one that gets it done,” he said. “When you think Kanye in Chicago or you think Jay-Z in New York, that’s the association I want.”

On his 2021 project E For Effortless, E The Profit embodied a stern, propulsive sound without coming off as brash and affected. The project is riddled with cheeky bars and steady flows that grip the listener. When discussing this project, E The Profit said it was a quality body of work for him at the time, but he is always looking to progress.

E The Profit is aware that the Cincinnati and Northern Kentucky region lacks a signature sound, and although he knows he can’t single-handedly craft that sound, he is determined to evolve his own while drawing more attention to the area.

“We just get overlooked and I’m sick of it. Somebody has to do something, you know what I mean? You can’t just talk about it forever,” he said.

E The Profit spoke of his success as if it were destined: he exuded an air of resolute conviction. His eagerness to act on his ambition is what he believes distinguishes himself from other local artists. His philosophy emphasizes the execution of ideas, because it is when ideas are brought to life that they are remembered.

And when it comes to developing as an artist and morphing his conceptions into products, E The Profit has garnered assistance and belief all in the same.

NKU senior Ethan Dickens, majoring in Electronic Media Broadcasting, has propelled E The Profit’s music career through his music videos, helping produce many of his videos since he started making music.

“I don’t know any other artists who are putting in the time and reps like he is. Every song he is getting better and that goes hand in hand with every video we make for him,” Dickens said.

Tanner Moeves, NKU alumnus and founder of multimedia production company Soul Serum, is E The Profit’s manager and has fully believed in his success since they began working with each other in 2020. Moeves, an active and attentive figure in the local music scene, said E The Profit’s work and future are typically met with optimism when interacting with different audiences, peers and artists through his work.

“People’s opinion of me is none of my business, you feel me? I’m out here doing my thing and they can either like it or they don’t like it, because there’s plenty of people that do, and those are the people I care about,” E The Profit said.

The sense of assurance surrounding E The Profit’s breakthrough is fortified by a supportive team, a poised work ethic and consistently improving music.

E The Profit’s will to make a name for himself through music is carried out with focused vision that enables him to take steps to continue growing his fanbase and cultivating his sound without distraction. He is not concerned with what other artists in the area are doing, but he respects them nonetheless.

“People spend too much time trying to bury everyone else trying to get to the top, and you don’t have to do that. There is so much room up there for everyone,” he said. “It’s not a competition.”

As E The Profit and his team work to get his music in the ears of more people through consistent social media postings, regular song and music video releases and live shows, he has become more attuned to his personal process of creating.

Discussing his upcoming project that he plans to release in April or May, he revealed he has enough recordings to make multiple projects, but he wants to curate the perfect body of work to represent this chapter of his career.

On his forthcoming project, E The Profit says he is taking his time with emphasis on quality control. He has been capturing creative sparks as they come, developing them with patience and grace. He also explained that he has been more mindful of letting ideas sprout naturally and not rushing the creation process at the expense of quality, finding that sleeping on an inconclusive idea will sometimes spawn an answer.

“I’ll have dreams of me in the studio and literally finish the song. Those kinds of moments where I’m like ‘Okay this is gas. This is how I know it’s supposed to happen.’”

In his upcoming work, he said he finds himself rapping about his life and telling his story, which he hopes will resonate with audiences who can relate.

“The creation process is a mixture of experimentation and almost nostalgia,” he said about his recent recordings.

E The Profit’s self-assured and poised demeanor may lead some to believe that a music career was always in his plans, but this is not the case. He played football at Thomas More University and graduated with a degree in exercise science in 2021. He tore his ACL in his sophomore and junior years, which he says prompted him to reflect on what he wanted to accomplish in his life.

E The Profit spoke of his football injuries as if it were serendipity. Although he loved football and says he would never have quit on his own terms, he says that stepping away from the sport set him on his current path. It allotted him time to lock in on his music and make key interpersonal connections to ignite his music career.

One of these valuable connections was with his manager, Moeves. Moeves graduated from NKU in 2019 with a degree in Organizational Leadership. While at NKU, Moeves was the social chair of Pi Kappa Alpha, affording him the responsibility of booking DJs and venues for parties and stirring his interest in event production.

“I got my first taste of what throwing a concert would potentially be like,” Moeves said.

The multimedia company Soul Serum, founded by Moeves, got its start in talent buying and event promotion, and eventually branched into music video production and podcasting amid the outbreak of COVID-19.

Moeves is now pursuing his music-based ventures full time, attempting to vitalize local music culture and inspire people to engage with the scene.

For E The Profit and Moeves, college was a period that spurred life-changing revelations leading them down their current paths. They acknowledged that they are opting out of the ‘safe route’ by following their sense of purpose—a road with ups and downs that they gladly traverse.

E The Profit and Moeves are kindred by their shared ambition to transform the Cincinnati and Northern Kentucky area into a hub of music culture that demands national attention.

Between anticipation for a new project to be released in April or May and a live performance scheduled for April 16 at Madison Live in Covington, their mission is in full effect for 2022.

For NKU students engaged with the hip hop scene, a local artist garnering national attention would be an unforgettable spectacle that unites and enlivens the community. But such a feat requires patience; gradually, E The Profit is expanding his fanbase and establishing a reputation as a name to know in the area.

“I’ve never been to a show before but I know a few of my buddies have and they loved the energy. I hope to be there at Madison Live for sure. He’s grown a bigger fanbase so it should be lit,” said NKU sophomore Jason Lam.

When the moment comes and crowds become acquainted with the name E The Profit, Moeves and E The Profit want the process to be organic and sustainable, with people catching wind of the artist that has eluded their radar but been in front of them the whole time—not because of a single moment of virality but because of consistency and craft. E The Profit and his team are devoting countless hours of work – building from the ground up – in hopes of creating something that leaves an everlasting impression.