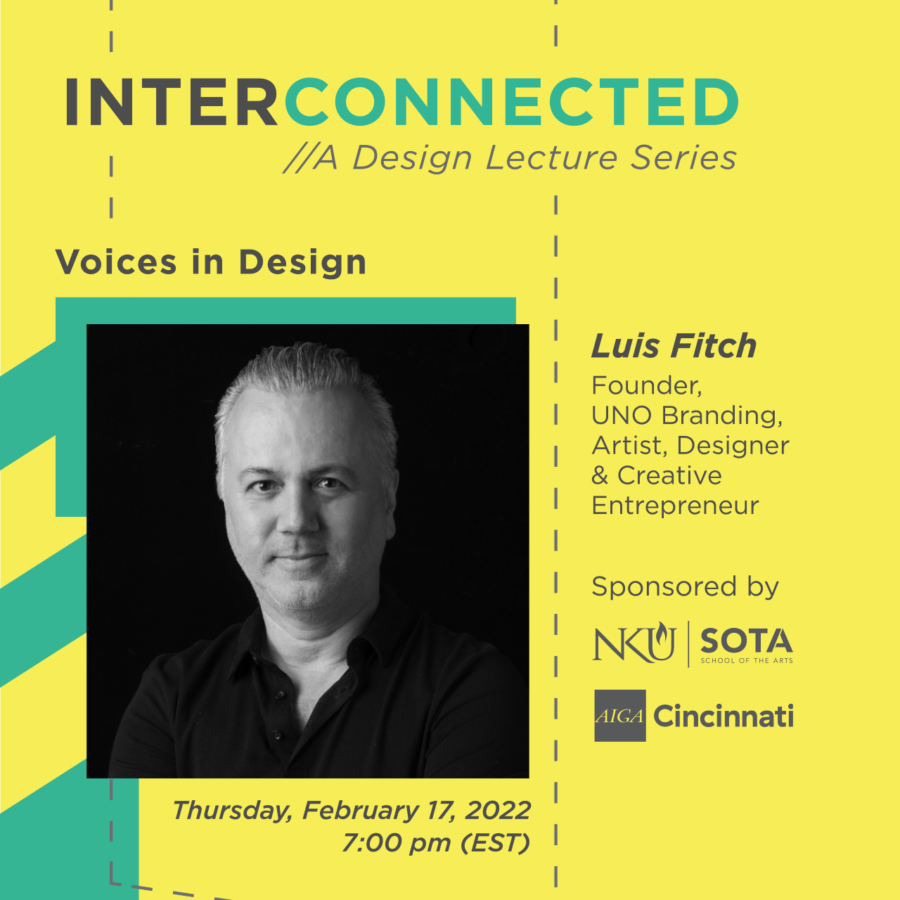 Graphic of the event designed by Prof. Natalie Tyree.

On Thursday, NKU hosted the 4th Interconnected Design Lecture Series online through Zoom. The speaker of the event was Luis Fitch, the founder of UNO Branding. He is also an artist, designer and entrepreneur. There were 22 attendees at the event.

Luis Fitch was invited to speak at the event at NKU by Julie Mader-Meersman who is a Professor in the Visual Communications Design Program in the school of the arts at NKU.

“This lecture series has 6 different universities across Kentucky inviting different nationally or internationally known designers to come and talk to us about their creative work and their careers as designers,” Mader-Meersman said.

Mader-Meersman also talked about how she first met Luis and their connection as teachers.

“Luis is very exciting. We are really proud to have him here. I first met Luis when I started my teaching career in Minnesota,” said Mader-Meersman. “We would take students to the twin cities to tour the different studios and we went to Luis’ studio which was called Uno Branding.”

“Any artist or every artist should have a voice,” said Fitch. “There are a lot of countries where as an artist, or a poet, or a photographer or a painter, you don’t have a voice. You may think you have it, but then once you put it out to the public, the government might shut you down, disappear or kill you.”

At the event, Fitch talked about how a poster of his appeared on the television show Shameless. The poster only appeared on the show for a second, but in that one second, he Fitch said was recognized and people were emailing him and telling him that they recognized his work.

“One day, my social media just went crazy. Emails, everybody saying, Wow , congratulations, you’re all over the place. Like what are you guys talking about? Yeah, you’re in Shameless,” said Fitch.

“It was really cool to work with Target because not only did I do an analysis of what they were selling, but I wanted to make sure that there were pieces that were really original in the sense of how we commemorate the Day Of The Dead,”  Fitch said. “And more importantly, I wanted to make it super accessible to not just Mexicans and Latinos but the general market who have suffered in this pandemic.”

Mader-Meersman talked about why NKU wanted to host this lecture series and why she thought it was important to host this event.

“We decided that we wanted to have a lecture series that the intent was to shine a light on those in those demographics who can be models for younger people who are considering, you know, careers, and show them the amazing work that so many people are doing that is underappreciated,” said Mader-Meersman.