Connie Seiter appeared as a contestant on “Family Feud” that aired on Feb. 15. 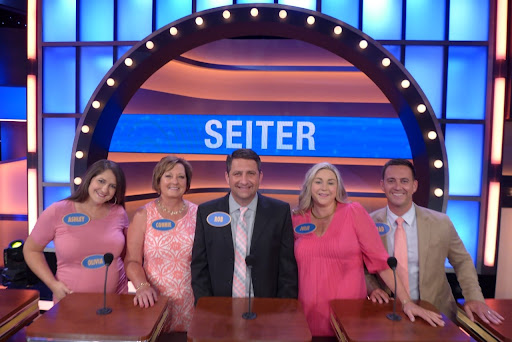 Connie Seiter and her family as contestants on “Family Feud.”

Connie Seiter, assistant to the vice provost, recently appeared as a contestant on Steve Harvey’s “Family Feud” that aired on Feb. 15.

Seiter’s interest in the show began when she would host over 60 other family members during Thanksgiving, where after dinner each year Seiter and her family would play a game. For the past few years, they have played the game “Family Feud”, a game show where two families go head to head guessing the most popular answers to survey questions.

That is when Seiter’s son mentioned to her that she should consider being on the show. Soon after in 2019, she had her daughter apply to be on the show. Seiter didn’t end up hearing back for over a year. Then, she received a message that said the show was interested in having them.

Seiter described what it was like when they first heard that the show was potentially interested in them being contestants.

“We all love Steve Harvey, we think he is hysterical. With it being a family-type show, we just thought it would fit perfectly for all of us,” Seiter said.

Seiter added how the show receives thousands of applications each year to be contestants on the show.

“It was exciting to believe that we actually heard back from them. There are over 25,000 people who apply for the show [annually],” Seiter said.

In January 2021, the show reached out to Seiter and her family for a Zoom interview to give them a chance to introduce themselves, as well as play a practice round of the game.

After the Zoom interview, the show let them know that they would review their application and keep it on file for one to two years and that they would let Seiter and her family know if they were interested.

But it was not even a few months before the show reached out to Seiter and her family asking them if they would like to be on the show.

“Within a couple of months we heard back from them and they said they were ready to have us down there,” Seiter said.

The show flew Seiter and her family down to Atlanta where the show was taped and they stayed in a hotel for five days to tape the show.

Seiter also described what her day looked like while being on set at “Family Feud”.

“When they came to get us the first day, it’s a long day. They come and get you between 7:30 and eight o’clock in the morning and you don’t get back to the hotel until about nine o’clock that night, because they generally tape four shows a day,” Seiter said.

After the first day of taping, Seiter mentioned how tired and a little disappointed she and her family were after finding out that they were not picked to go on stage that day. Usually, this is normal for people brought on the show, so Seiter and her family ended up being in the audience and participating that day.

“That first day we were exhausted and a little disappointed because we didn’t get selected on stage that day,” Seiter said. “But we found out later that is generally how they do it. They will let you sit in the audience, participate and see how things go.”

Due to COVID-19, there weren’t many other audience members when taping. However, this ended up being how Seiter and her family got to meet the host of “Family Feud” Steve Harvey.

“Steve in-between the taping of the show would come out and talk to us into the audience, one on one, face-to-face and we loved it. We had so much fun and enjoyed the entire experience,” Seiter said.

Seiter explained the importance of what this show truly meant to her.

“It’s a good laugh, it is entertainment,” Seiter said. “It is just enjoyment and fun, I think we all need that in our lives.”

Seiter also explained how exciting it was for her to have the opportunity to be on “Family Feud”.

“It was fun to be a part of it and interact and meet Steve. The whole experience was just so much fun,” Seiter said.