‘The Lightning Thief: The Percy Jackson Musical’ is set to strike the Corbett Theater later this month

Will be performed from Feb. 25 through March 6 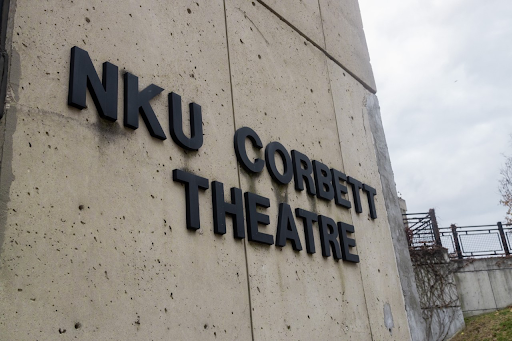 The regional premiere of “The Lighting Thief: The Percy Jackson musical,” is set to open in the Corbett Theater from Feb. 25-March 6, 2022.

“The Lighting Thief: The Percy Jackson musical,” tells the story of Poseidon’s son, Percy Jackson, and his newly discovered powers as he tries to find the lightning bolt that has been stolen to prevent war with Greek gods. The musical showcases an all-Rock score, giving a unique experience for audience members to see.

Alex Simpson, junior musical theatre major and Percy Jackson in “The Lighting Thief: The Percy Jackson Musical,” is excited to be rocking out on stage for his second show post-pandemic.

“I love the cast, the entire process is fun and there is never a dull moment where I am bored or don’t want to go to rehearsal,” Simpson said.

This excitement though hasn’t changed because of the uncertainty of COVID-19. Simpson described the adjustments he and the rest of the cast and crew have made to prevent the spread of COVID-19, doing whatever they can to keep themselves and others safe. With that in rehearsals comes some challenges.

“When you’re belting these high notes you drop your jaw as far as you can, and the mask will come with it sometimes. Or it will go up and cover your eyes and you have to keep on moving it,” Simpson said.

Jamey Strawn, director and musical theatre program head, is grateful to be able to do the show despite it getting pushed back and possibly pushed into spring break.

“Because the university got pushed back a week, we kind of had to go into emergency mode and talk to the cast about who was available, because if we pushed the show back it would push into spring break,” Strawn said.

Thankfully though, Strawn mentioned how the entire cast was able to adjust to the show getting postponed.

“We were lucky enough that no one had a conflict and that we could move the show back. The alternative would’ve been to cut rehearsal by a week which would have been really difficult,” Strawn said.

Strawn added why he believes this show would be challenging to do without that extra week of rehearsal, describing all the moving puzzle pieces to this show.

“There is a lot to do and a lot to put together very, very quickly. We’re using projections, stage combat, singing and there is a rock band so it’s got a lot to it, so putting all that together in a shortened amount of time would’ve been very difficult,” Strawn said.

Je’Shaun Jackson, senior musical theatre major and Grover in “The Lighting Thief: The Percy Jackson Musical,” is excited to be able to bring out his inner child self in this show.

“It’s challenging to tap into that younger side of myself and to explore what it is like to walk around in that youthfulness again and just have fun with it,” Jackson said. “It is fun, it is campy and it is meant to not be taken as seriously, but there are serious messages within it that are fun to tap around in.”

Jackson mentioned the things he is most excited for this production in particular.

“I am excited to be on NKU’s stage. I am also excited for everyone to see the graphics and all the cool things we are doing for this specific production. It is also the regional premiere so that is really exciting as well,” Jackson said.

For more information about the show or to purchase tickets visit https://www.nku.edu/academics/sota/theatre/season/2021-2022.html.