Read more about the Disney Club at Northern Kentucky University 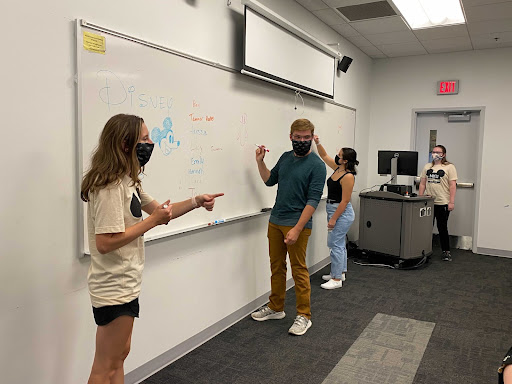 Co-presidents Allison Detmer, Shelby Lillie and general members Ben Lambert and Rachel Rivera drawing on the white board during a meeting.

Laughter and creativity run wild on Wednesday evenings in Norse Commons room 140. Nostalgic Disney music echoes throughout the walls, and students race to the white board to participate in Disney-themed Pictionary and trivia. Happiness and a sense of community radiate through the room as friendships are born.

NKU’s Disney Fan Club is a close-knit body of Disney enthusiasts, of course. Members of diverse ages and backgrounds gather weekly at 5:00 p.m. to enjoy stress-free company and bask in their love for Disney.

The Disney Fan Club was founded in Sept. 2020 by hometown friends Shelby Lillie and Allison Detmer.

Lillie, senior computer information technology major, recalls seeing students sporting Disney merchandise around campus and wondering why a Disney club had not yet been founded. It was at that point she collaborated with Detmer to create the group.

“The club began with eight members and has grown to as many as 25,” Lillie said.

Upon founding the group, it was a natural progression for Lillie and Detmer to become co-presidents. Lillie plans events for club meetings and stays in virtual contact with members. Detmer, junior computer science major, runs weekly meetings and incorporates what members want to see happen into the meetings.

Members get to play a huge part in the meetings using a weekly poll sent out asking what events they would like to see take place. Events are always changing, and the co-presidents are always up for new ideas and ways to engage members.

“You don’t have to be the greatest Disney fan,” Detmer said. “We are a nice community of people who have fun together.”

Lambert, a freshman computer science major, heard about the Disney Fan Club through his peer mentor, Detmer. He has been a member since the beginning of the semester and enjoys the environment of the meetings.

“This is the easiest and most chill club,” Lambert said.

Members come when they are free and there is no pressure involved. The club’s purpose is simply to have fun in the midst of the stress of college.

Emily Bick, a sophomore middle grades education major, agreed with Lambert. As a freshman, she was hesitant to become too involved for fear of getting behind in her studies. Many students can relate to this sentiment, but Bick found her perfect niche in the fan club.

At the end of the day, all members have one thing in common: their love for Disney.

“You will be surrounded by everything Disney,” Lillie said, from Pixar to Star Wars.

When asked how the Disney Fan Club differs from other organizations, Lillie responded, “All you have to do is show up. New members can join any time.”

The group can be reached via Instagram @nkudisneyfanclub. Anyone interested can also visit NKU’s myEngagement website at https://nku.presence.io/organization/disney-fan-club. Meetings take place at Norse Commons 140 each Wednesday at 5p.m.