The showcase gives students the chance to learn about stage management, stage design and choreography 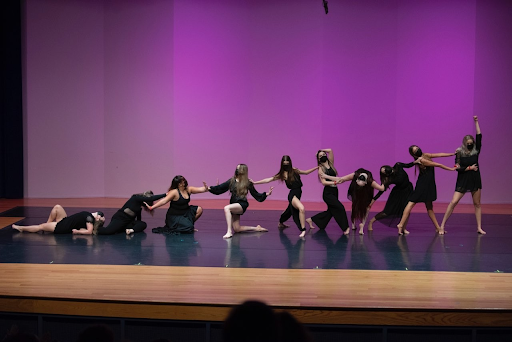 The ECS is a student-produced and student-led showcase that gives NKU students the chance to learn about stage management, stage design and choreography as they work together to build a unique way to express what they’ve learned.

This year’s ECS is the first live performance since last March for the dance majors. Unlike last year, this performance was in-person as well as recorded and posted online.

This didn’t cause any major problems for the people leading this showcase, and Maiya Caldwell, the artistic director, believes that the process for creating this performance has gone really well.

“I think overall it’s been pretty smooth,” Caldwell said. “The only challenges are just things to be expected.”

Madisyn McLaughlin, the assistant artistic director, also agreed that the process for ECS had no major problems.

“It’s been great,” McLaughlin said.“Things have been going really well.”

Teddy Lavender, a dancer from the performance, talked about how the practices were for preparing for the showcase.

“I sometimes don’t have time to practice on my own,but they always send us videos,” Lavender said.

They had different days set aside to rehearse the different pieces.

On Sunday, they had their only dress rehearsal in which everyone was present and all the pieces were rehearsed together.

“We will get at least two runs,” Lavender said.here will be some time after if the choreographers want to run again.”

Lavender didn’t think that only having one day of dress rehearsal would cause any problems. In fact, they believed it was very helpful.

The showcase featured six dances. Each dance was choreographed by NKU students.  The six dances are named as followed:

This year’s show featured a finale with guest elementary students who joined in on a dance to the song “Permission to Dance”. The choreography was also student-made.

“Some of the different dance classes went to visit them last week and taught them a dance,” Caldwell said. “Some of their older kids are coming to perform with us.”

They wanted to use this as a way to build community outreach within the nearby community, while also hoping to create a new trend for future events like this one.

“It’s a first, so hopefully this starts a new trend on how we can reach out to the community,” Caldwell said.