‘Torch Song’ set to open tonight in the Strauss Theatre

'Torch Song' is the first mainstage show to open at SOTA since early 2020. 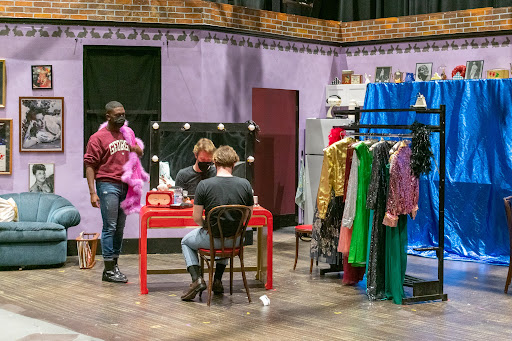 “Torch Song,” A Tony Award-winning play, is set to open this Wednesday in the Strauss Theatre located in the School of the Arts building. It is the first mainstage show to open at SOTA since early 2020.

This show tells the story of a homosexual Jewish man, drag queen and torch singer in New York City in the late 1970s.

This play is the first SOTA mainstage show since early January 2020. Although it will not be the same as before COVID-19, new health protocols  designed to help stop the spread of the Delta variant were put in place.

Despite the COVID-19 protocols, many students acting in the play are excited to be back on stage again.

Emily Hilbrecht, a second-year Bachelor of Fine Arts musical theatre major, was excited to be able to be back on stage despite being nervous at first for being an underclassman. Hilbrecht is playing Laurel in the show.

Hilbrecht mentioned how this show was different from other shows she has done in the past, focusing more on acting rather than singing and dancing.

“I like to focus on vocals and dance, so this is really different for me being in a straight play. We have singing in it, but it is mainly acting, so it is really fun for me to hone in on that part of my art and focus on that instead of just singing and dancing,” Hilbrecht said.

Linnzie Hays, a fourth-year Bachelor of Fine Arts musical theatre major, is excited to learn more about what it is like being an understudy in a show. Hays understudies the character Ma.

In the past, many mainstage shows did not have understudies, so for Hays, this is a new experience.

“The whole understudy thing is really cool. I think that it is something that NKU is gonna start doing from now on, and I think they should because it is a big learning experience for us as actors, and it’s something we have to do in the real world,” Hays said.

Hays described what it was like getting to do her put-in rehearsal, a rehearsal that is running the whole show as a traditional performance.

“We had a put-in rehearsal last night, and we went to do everything which was really nice, but it is definitely different on the outside and jumping in on the inside and doing it and trying to do it and incorporate things you’ve seen and heard,” Hays said “The notes on my script are insane.”

Chris Monell, a third-year Bachelor of Fine Arts musical theatre major, is a swing in “Torch Song,” covering over four different roles in the show.

“It’s my first time doing it, and it has been a lot more work than I thought it was gonna be. I’ve always known what swings do, but I have never actually done it,” Monell said. “I knew it could not be that bad, but having to memorize over 100 pages of dialogue has been a lot tougher than I thought.”

Monell hopes that people going to see the show leave with a better understanding of what people are going through around them.

“I hope people get a new sense of looking at the things around you, everyone goes through hardships, and we are all each unique in our ways, and we all struggle no matter what, and it is nice to recognize that with other people,” Monell said.

Paul mentioned how special this show is to her, being the last mainstage show she’ll be in before she graduates in December.

“This show is really everything right now. I am just so proud that this is the last show I got to do. It has such beautiful and important messages that the general audience should know about, and everybody in this world should really know about,” Paul said.

Paul also described how she hopes “Torch Song” impacts the audience as much as it impacted her and the rest of the cast.

“This is a really personal show to me because it hits on very important topics that don’t get talked about a lot, or as much as it should. I hope this show impacts the public as much as it impacted this cast,” Paul said.

“Torch Song” runs from Sept. 29th to Oct. 9th in the Strauss Theatre. To purchase tickets online or for more information, you can visit https://www.nku.edu/academics/sota/events/tickets.html.