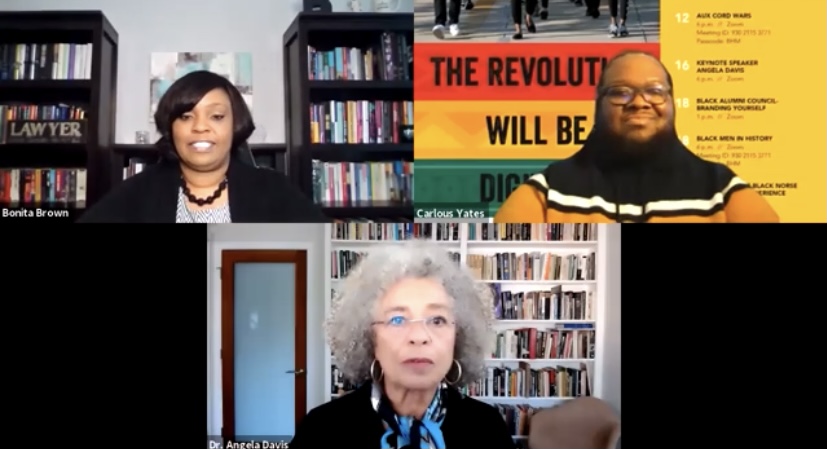 Tuesday evening, over 500 students, faculty, staff and members of the community tuned in virtually to hear educator and activist Dr. Angela Davis share her experiences and advice as this year’s Black History Month (BHM) Keynote Speaker.

Vice President and Chief Strategy Officer Bonita Brown moderated the discussion and asked questions submitted by students and sponsors across campus regarding combating white supremacy, racial disparities in the health care system during the COVID-19 pandemic and the importance of white allyship.

Davis was born and raised in Birmingham, Alabama by parents who were also active community organizers. As a teenager, Davis marched and picketed against racial segregation and went on to earn a doctorate in philosophy from Humboldt University in East Berlin. She quickly became known as a radical feminist and activist and a member of the Communist Party USA, as well as an associate of the Black Panther Party.

Davis has also campaigned for social justice and was one of the founders of the Critical Resistance and National Grassroots organization, fighting for change in the prison system. She is currently Distinguished Professor Emerita of History of Consciousness, an interdisciplinary Ph.D program, and of Feminist Studies at the University of California, Santa Cruz.

When asked about methods for combating white supremacy at educational institutions, Davis said the process of examining complicity is going to be a very long one.

“I think what the universities need to do is make a profound commitment to move along a path that is going to not only involve the acknowledgements of the part that the academic community has played in producing structural racism, but how to begin to take it apart and dismantle it.”

Davis also recalled moments during her childhood, such as witnessing Ku Klux Klan members burn down and bomb homes in her neighborhood, that motivated the actions she would take as an adult.

“I grew up knowing the damage that the Ku Klux Klan can do and witnessing it—this stuff doesn’t go away.”

Davis addressed the importance of recognizing the allies that participated in last summer’s protests in response to the murders of George Floyd and Breonna Taylor, but said it was “about time.”

“The struggle for Black freedom is not only important because it specifies that people of African descent deserve to be treated fairly with equality and deserve economic and political and cultural freedom, but because this struggle represents to the world the struggle for democracy,” Davis said.

Jennifer Toyo, a member of the BHM committee and AASI signature program, R.O.C.K.S (Responsibility, Opportunity, Community, Knowledge and Success) coordinator said she didn’t initially have a lot of knowledge about Davis because she isn’t originally from America. However, Toyo’s mother is American and considered Davis to be one of her heroes growing up. Toyo not only attended the public conversation with Davis but was also invited to participate in a smaller, open-group discussion between Davis and AASI student leaders.

Toyo said she appreciated how much Davis respects the younger generation because she thinks a lot of students that were listening to the event want to have a role in the social justice movement. Hearing from Davis also influenced the type of conversations Toyo plans to have with the freshmen she works with through the R.O.C.K.S. program.

“One big thing that I want to incorporate in more with the conversations with the students is the sense of community—to encourage the students to really see the need for them to build community while they’re here,” Toyo said.

Toyo believes that a lot of the students that come into the R.O.C.K.S program think they can succeed by themselves, but she wants them to understand the importance of building a whole network.

Carlous Yates, one of the BHM event coordinators and Director of African American Student Initiatives (AASI), said Davis’s conversation not only aligned with what is going on in the world today but also some of the topics have already come up in conversations had within AASI organizations.

Yates said he admired how Davis said she responds to the appreciation of others, explaining that the actions she has taken are just a part of who she was and what she does.

“When you think about when it comes to activism and feminism and things, she’s just a legend, and 50 plus years of doing this work and she’s still out doing the work.”

A recording of the event can be accessed through this link. Details on this year’s remaining BHM events can be found on AASI’s BHM page.