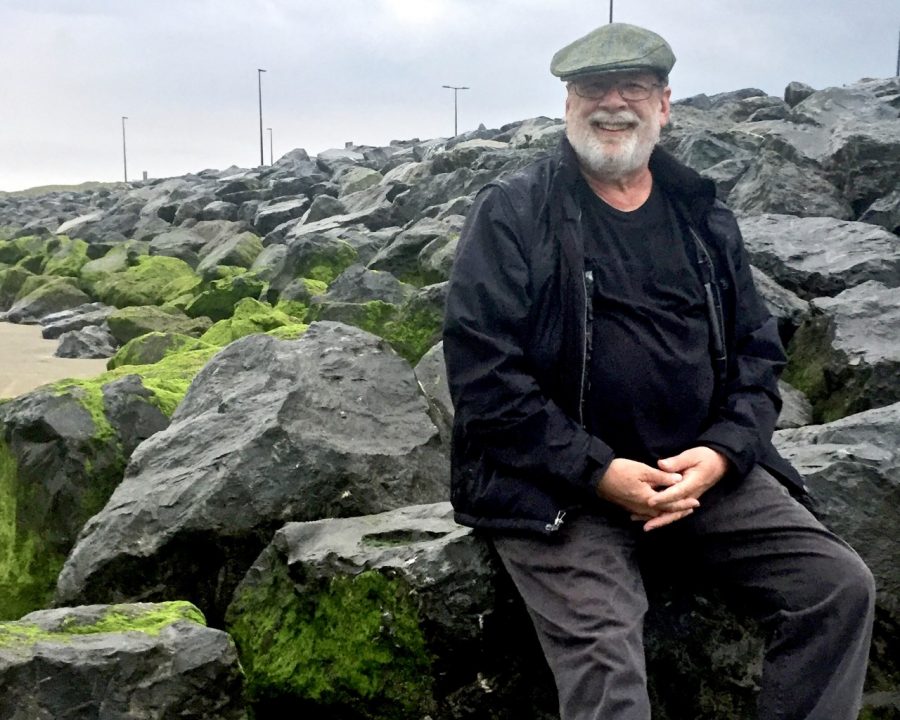 Stephen Leigh on a trip in Ireland.

Retired Northern Kentucky University professor and current author Stephen Leigh is releasing a new book, Amid the Crowd of Stars, about cultural conflict and infection in February.

When he was writing the novel, he didn’t know how his book would parallel the current COVID-19 pandemic.

“I kind of realized toward the end of writing this thing that, to some degree, I was talking about COVID,” Leigh said. “When I started this, there wasn’t a COVID. I didn’t start out with that intention, but by the end, it was kind of like, ‘Okay, I’m kind of dealing with that issue myself in this.’”

The background behind the book

During a trip to Ireland in 2017, Leigh visited the Dingle Peninsula. At the end of the Peninsula, there are a small group of islands called the Blasket Islands. Leigh said he was fascinated with the islands when he went there. The islanders have a literary tradition of books written in the late 19th and early 20th centuries. Leigh said the Irish language was still written and spoken there.

“One by one by one of the residents of that island left—especially the young left to go to America or to go over to the main part of Ireland. Actually, by 1953, they had to evacuate the island because there weren’t enough people left on it,” Leigh said. “It was a fascinating place to me and that got me.”

Leigh was also inspired by science fiction TV shows. He said whenever he reads or sees science fiction, the characters always take off their helmets if the atmosphere is breathable, but they don’t take any precautions to avoid getting infections or spreading their own.

“What they’re doing is they’re immediately breathing in any viruses that are there … they’re going to pull in any biota there. They’re also going to do the opposite thing; they’re going to breathe out our biota and our viruses to that world. We’re going to cross-contaminate each other.”

Leigh said when scientists send probes to space, they get sterilized first to prevent any contamination of the places they’re going to and vice versa. Even astronauts were quarantined after moon landings before scientists discovered the moon has no chance for contamination.

“If you’re talking space travel, that’s something you have to really consider is, if you go somewhere else, what are you bringing back? What are you doing to the place that you’ve been if you don’t isolate yourself in some way?” Leigh said.

Leigh has been publishing with DAW—a part of Penguin Random House—since 2000 where he’s written a variety of science fiction novels. For this novel, Leigh started writing in April of 2018 and sent in the final draft in October of 2020.

After Leigh has two or three drafts, he will send it to his editor and they send it back with notes. Leigh said novels go through many drafts and editing processes—from proofreads to the galleys. When he’s writing, Leigh said he’ll think of something new and change or tweak things. His original manuscript, he said, is very different than the final product because it’s changed so much. Leigh said he enjoys the process of revising novels, as it makes his books better.

“When I was teaching at NKU, I would always tell my students that the initial drafts are not what you want to send out. You want to make sure that you go ahead and revise things because it’s in the revising process that something that is mediocre can become really good, and something that’s already good can become really good,” Leigh said. “The revision process is is critical. And if it’s critical for me, it’s critical for them.”

Leigh said he writes every day to get better at it. He writes at least 500 words every day—only missing a day here and there.

“When I was starting out as a writer, early on, there was a writer I knew who published already several novels. He told me that if you just write one page a day—which, in manuscript form, is probably 250 300 words—by the end of the year, you’d have written a novel if you’d write one page a day,” Leigh said. “I’ve kind of taken that to heart.”

Writing since he was a kid

The first time Leigh wrote a novel, he was around the age of 11. He had just read a book about Lloyd Bridges, and he wanted to create his own story.

“I didn’t know a thing of what I was writing about, but I remember writing that under the covers at night, longhand, and I remember getting quite a stack of papers,” Leigh said.

When Leigh was in high school, he wrote short stories and would check out science fiction and fantasy books from the library. Eventually, he ran out of books to check out from the library because he read them all.

“It was kind of like if I wanted more, I had to write more. I had to write the stories that were now in my head,” Leigh said. “So that’s what I started doing was just writing what was in my head, so I’ve been writing since I was in high school.”

“I’ve been writing all along. It’s just something I do. I can’t imagine not writing,” Leigh said.