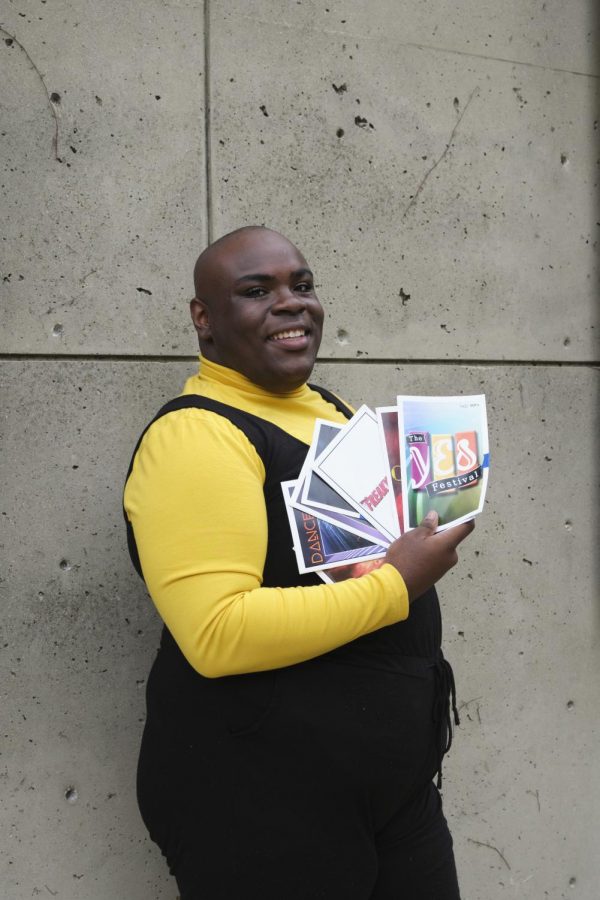 Je’Shaun Jackson, junior musical theatre major, has discovered himself during the pandemic.

Theatre student welcomed pandemic as opportunity for self discovery

When the COVID-19 pandemic started in March, junior musical theatre major Je’Shaun Jackson believed that it was the best thing to happen for him as a performing artist. Despite the circumstances being nerve-wracking, he said he welcomed the situation as an opportunity for self discovery.

“It made me put aside all the fears I had about not being on stage because now I’m forced to not be on stage. Now I can’t be on stage at all in any capacity, so it made me sit back and focus on the things that I knew I needed to focus on,” Jackson said

Jackson, whose first performance was in a church ensemble at the age of 5, hadn’t had much of a break from theatre until the pandemic. Once Jackson entered elementary school he became regularly involved in ‘theatre-based’ performances, like a collaborative production of “Charlie and the Chocolate Factory” with Lexington Children’s Theatre and Yate’s Elementary School.

“I was like ‘wow, this is amazing like being able to dance, sing and act, never thought that was possible’,” Jackson said.

Jackson said when he started deciding what he wanted to study in college, he initially planned to become a math teacher, but when a director he worked with suggested that Jackson at least audition for a university theatre program, he decided to give it a chance. Once Jackson was accepted into NKU’s School of the Arts (SOTA) musical theatre program, he knew performing was what he wanted to study.

“Personally, I see myself doing nothing else in life,” Jackson said.

Jackson continued to have steady involvement in productions during his first two years at NKU, even having plans to assistant direct one of SOTA’s fall productions before the pandemic caused the department to change their plans.

“It was hurting me not being on stage, not knowing what my future held, not knowing if I was going to step on stage for how many ever months,” Jackson said.

Despite the uncertainty, Jackson believes that when artists have nothing else to do, it inspires them to create. This is one of the reasons why he was inspired to start working on writing his own show in April along with other NKU students/alumni, as well as a student from Eastern Kentucky University.

“We’ve decided to keep it all a secret, but it is about the current times we are living in and basically being a Black man in America,” Jackson said.

According to Jackson, the play, which has an undisclosed title at this time, is from his perspective of the world and will discuss “the things that people don’t understand, that aren’t taught, that aren’t up to date.”

“It’s going to be something that gets you talking. We’re not straying away from things that scares us. We are touching on every sensitive topic. You will cry. You will be pissed. There will be things that you didn’t know,” Jackson said.

Besides working on his own show, Jackson has continued to stay involved in community theatre in the midst of the pandemic. He recently performed in The Carnegie Creative Distribution Committee’s production of “Godspell,” which took place outside at Pyramid Hill Park.

“When the show starts out with all 125 people there, there was only 125 tickets per show. We were all performing the first couple of group numbers, and then we split up into groups of five. So, the audience walks around the park to the different sections of the show,” Jackson said.

Jackson described the production as one of the best and hardest experiences he’s ever had, performing his breakout sections of the songs “All for the Best” and “All Good Gifts” a total of 20 times within a two-day period.

“It was a show that people could socially distance, walk on the Purple People Bridge and listen to a show that was set to that bridge,” Jackson said.

Jackson said his recent involvement with both The Carnegie and Playhouse in the Park were experiences he never thought he would be able to have prior to the pandemic.

Regardless of the current challenges, the performing arts industry is facing, Jackson said he and other artists refuse to give up.

The world better watch out because artists are at their most creative when they are unable to create for a while, Jackson said.

“Performing is like the one thing that brings so much joy to me because I have been able to stop being myself for two hours and getting into the head of a character and telling that character’s story for those two hours is something that I’ve always enjoyed doing.”