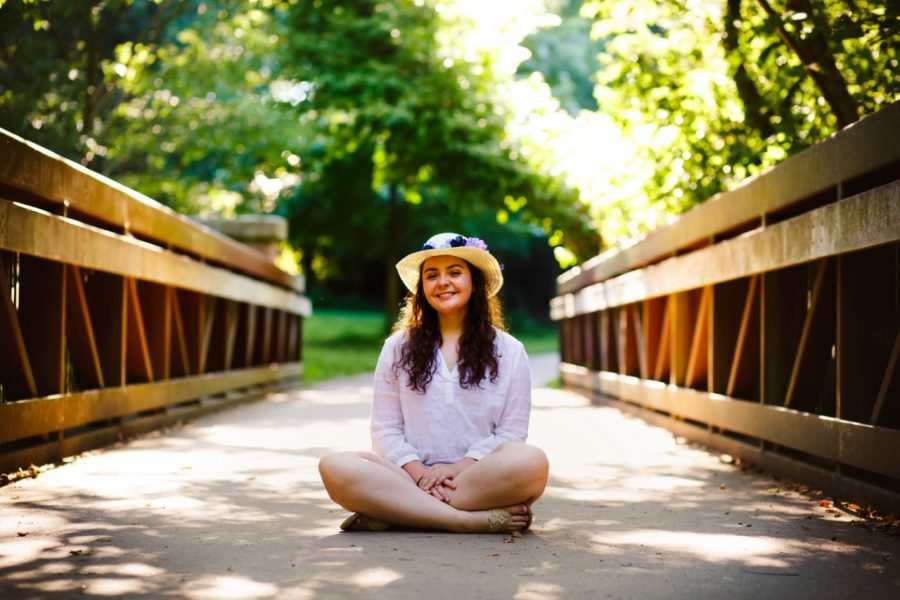 Maria Osbourn is a junior double-major in music and environmental science.

A conversation about conservation: NKU student advocates sustainability on campus

Sustainability is a series of steps. Maria Osbourn said she takes them one at a time.

“At the moment, I am really working on reducing my plastic consumption,” Osbourn said. “I think it’s hard to get away from plastics. They’re kind of everywhere in our life, but there are ways to get around it.”

Environmental sustainability describes the responsible interaction with the planet to maintain natural resources and not jeopardize the ability of future generations to meet their needs.

There are small ways to implement sustainability into your everyday life, according to Osbourn. A chore as simple as shopping at a grocery chain can be swapped for planting a small vegetable garden or visiting a local farmer’s market. This change in routine can reduce plastic waste by avoiding the plastic-wrapped produce of a grocery store.

Osbourn is a junior double majoring in music and environmental science. When she’s not administering flute lessons over Zoom, she visits local parks in her hometown of Louisville.

It was a local park, Bernheim Arboretum and Research Forest, that first sparked her interest in environmental issues at the age of 14.

During a visit to Bernheim, Osbourn noticed several initiatives about forest conservation in the area.

She began reading all of the information provided at the park about how forests help stabilize the climate through the release of carbon dioxide. When forestry declines due to pollution and wildfires, climate change is accelerated.

“That’s when I first tried sustainability. I thought it was really interesting and it just took off from there,” Osbourn said.

In addition to environmental issues, Osbourn said she also soon developed a passion for music. In middle school, she started playing the flute after receiving some health advice.

“I have really bad asthma, and I was told that playing the flute would help me learn how to expand my lungs,” Osbourn said.

In high school, she was part of a tutoring program where she taught the flute to younger students.

After enrolling at NKU, she couldn’t choose between environmental science and music as her major—so she chose both.

Osbourn recently became a junior instructor with NKU’s Music Preparatory Department over the summer. She delivers private flute lessons to students over Zoom.

“My teaching style is very hands-on. I like to ask questions just as much as I give feedback,” Osbourn said. “I make sure that when I teach there is a mixture of positive feedback and criticism, so the student feels really encouraged to continue instead of defeated.”

According to Osbourn, music has given her a sense of community and safety during the COVID-19 pandemic.

“Right now, we’re having some really tough times for everyone, and music can really help ease the isolation and the pain that some people are feeling,” Osbourn said. “I would encourage people to turn to music whenever they need it.”

In addition to leading students in music during private lessons, Osbourn dedicates her time to spreading more awareness about local environmental issues.

“On my end, I’m really working on the awareness side,” Osbourn said. “I think my biggest thing right now is trying to get student voices more involved in all the initiatives we’re trying to do for October and the rest of the year.”

October is campus sustainability month, and Osbourn has collaborated with NKU Sustainability to promote several events such as Netflix watch parties and a county-wide clean up day for Campbell County.

For NKU specifically, Osbourn said she is trying to inspire and lead students to recycle more on campus.

“If we can get our recycling program really down, and everyone really understands the importance of recycling and how to recycle, that would really help our university’s output and our impact on the environment,” Osbourn said.

According to Osbourn, social media can be used as a tool to connect with people on an individual level. Once an individual becomes interested in the idea of sustainability, it isn’t long before they can forge a connection with nature itself.

According to Osbourn, she has seen increased engagement with recent Facebook and Instagram posts for NKU Sustainability.

Environmental concerns have grown into the forefront of the younger generation’s minds as evident in Greta Thunberg’s activism and the Youth Climate Movement.

Though climate change is a global issue, students can contribute to sustainability through individual impact—all they need is some inspiration, Osbourn said.

“I would say that the biggest motivator for reducing an individual’s impact [on the environment] is hope. I noticed that a lot of people can get really anxious about the environment and climate change and everything that’s going on,” Osbourn said. “But the good news is that all of us can take steps to decrease our impact.”