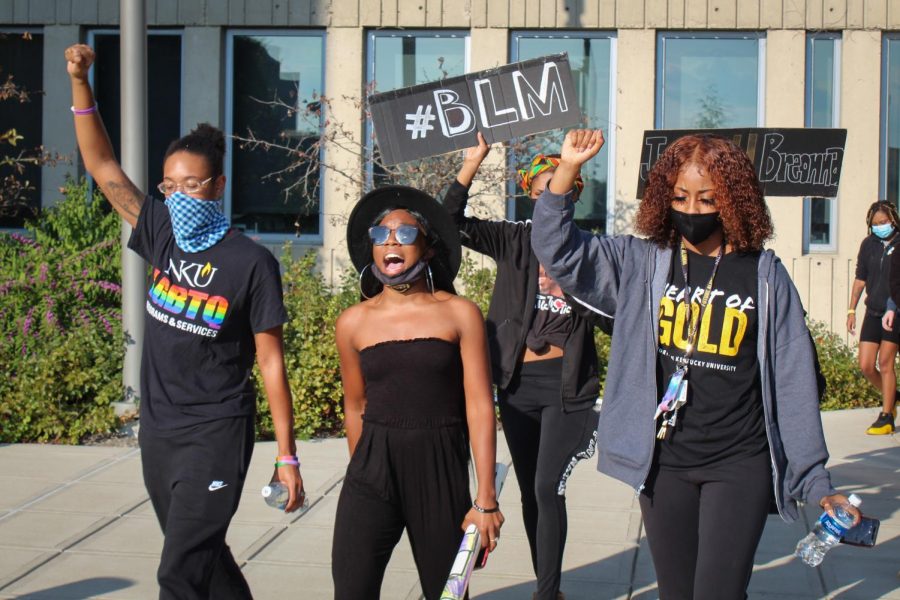 After a grand jury indicted one of three officers for the shooting of Breonna Taylor, Kiazja Watterson-Brown felt it was necessary to bring awareness of Taylor’s case and decision, but also for the other Black lives that have been taken.

“We still need to say the name of our people of color, who are still hidden in the dark, but didn’t receive their fair justice,” Watterson-Brown said.

“We are tired of being tired. All lives cannot matter until Black lives matter, am I right?” Watterson-Brown asked the crowd.

To which protestors sang in agreeance on the Norse Commons plaza.

Before the group began to march through campus, Anna Marie Adams, sophomore social work major, let the crowd know how close to home Taylor’s death is to her.

“I am from Louisville, Kentucky myself, born and raised, Old Louisville, I was born there. We’re hurting. My city is hurting. I’m not there right now, but I am hurting,” Adams said.

While Adams was nannying one day, she had her kids write Taylor’s name on a poster, and the kids were confused why it was important to do this. Her response, “People are hurting.”

As the crowd left Norse Commons chanting, “Say her name. Breonna Taylor,” in unison, the students were accompanied by faculty and staff of the University. People held up signs in protest with statements like “BLM” and “Silence = Compliance.”

The voices of the protestors caught the attention of onlookers. As they walked through campus, more students joined their cause.

Statements written in chalk were throughout their path reinforcing why they were marching: “No justice no peace,” and the Black power fist dawned across campus fueling the march further.

Watterson-Brown said she was excited by the turnout and crowd participation as she didn’t expect many people to show up on short notice since it was posted yesterday in response to the ruling.

Taylor McRight, freshman biology major, said the crowd gave her a feeling of acceptance. She said she marches to show support for people of color and because she feels justice needs to be brought to all people like Taylor.

Chanise Kimbley, freshman psychology major, said this march is important to her because she thinks of her family and friends and considers all Black people her family.

“Every Black person to me feels like a family member and imagining my actual family, my actual friends being caught up in these situations and being murdered unjustly just breaks my heart. I cry about this,” Kimbley said.