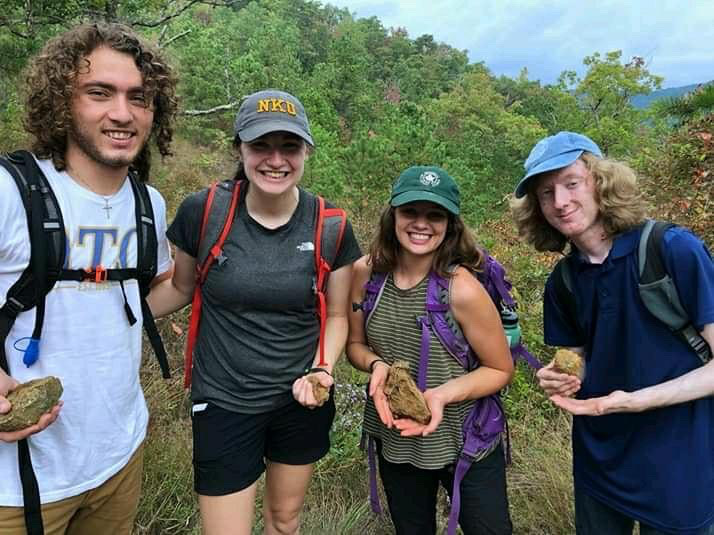 ‘Slightly stronger’: How Cameron Peterson is coping with quarantine

The senior geology major said he will miss walking at commencement

The global pandemic didn’t hit senior geology major Cameron Peterson very hard at first. It wasn’t until his school trip to Colorado was canceled that he understood things were changing. Then, his senior commencement was canceled, and he realized how important graduation actually was to him.

“I guess I’d always taken that for granted and it was like, ‘yeah, I don’t really care that much about just walking and getting a piece of paper’ but when it comes down to it, I do care,” Peterson said. “And now that it’s gone, I see how much it actually meant to me and how much I wanted my friends to be there to see me and do it and stuff like that.”

Peterson has been struggling with his mental health. Prior to the pandemic, he said his mental health wasn’t the best but it was manageable. Now, Peterson said he struggles to keep up with class assignments, motivation and scheduling.

To help cope with the stress, Peterson plays video games. He said this keeps his mind off missing his friends, overdue assignments or other stressors. However, he said it has created a “vicious cycle” that keeps him behind in assignments. Currently, he’s trying to catch up.

Before the pandemic, Peterson was in counseling. He said telehealth counseling isn’t the same for him, and he prefers in-person counseling for the connection. He also said he misses seeing his friends in person because texting or video calling is not the same.

“For whatever reason, one of my biggest things that causes me anxiety is if I think I’m going to be alone, so just being able to be on campus and have access to people, as weird as that sounds,” Peterson said.

“Just knowing that if I’m feeling down and I’m working on something, I can text a friend and more often than not, they’ll be on campus and I can hang out with them. It was always nice, but now I can’t really do that.”

Peterson said the hardest aspect of quarantine is feeling alone and unmotivated. He doesn’t feel like he’s living but rather surviving.

“It feels more like instead of living my life, I’m just surviving because of this whole crisis,” Peterson said. “Just trying to make sure I get through every single day. When I go to the grocery store, it’s a mess. Everyone’s a mess there.”

According to Peterson, the increasing sense of apathy feeds into his mental state, which then causes him to feel alone. When he’s upset, he prefers an in-person connection over a digital one.

Before the pandemic, Peterson said, no one thought about Starbucks being closed down because of a virus. If you wanted to go out, you could. Now those things aren’t possible, he said.

When the pandemic is over, Peterson said he thinks it will be negative at first because a lot of people, including himself, will be coming out of a “mental health pit.”

However, after the initial shock wears off, Peterson intends to think of this as a learning experience

“I think I’ll come out of it slightly stronger and not taking everything for granted,” Peterson said.