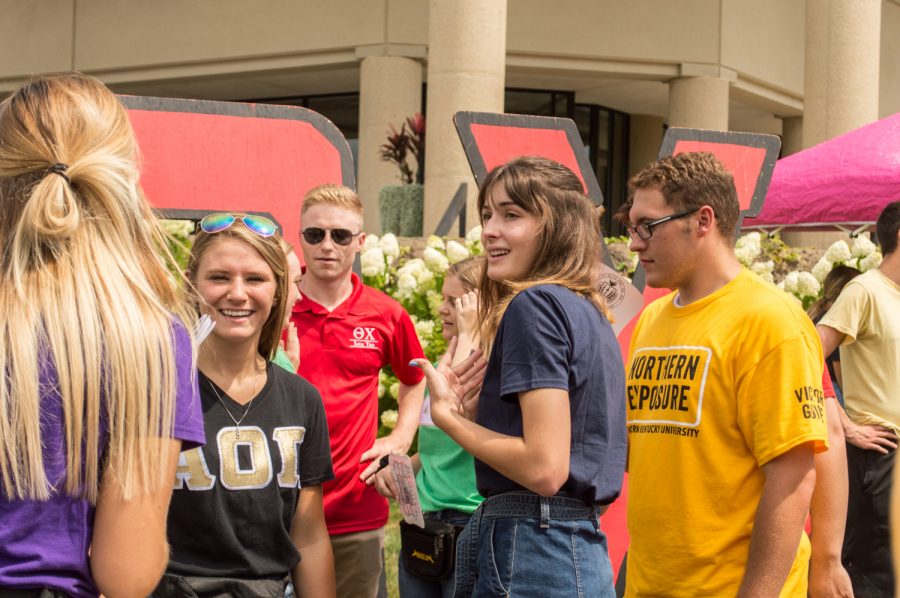 ‘Communication is key and that’s something we’re improving’

With the closing of campus due to COVID-19, groups and organizations have had to quickly find new ways to operate without physically meeting. One of NKU’s biggest communities is NKU Fraternity and Sorority Life, which has around 1,200 participants.

Azelin Gutierrez, computer science sophomore, serves as the Associate Member Educator (AME). In Gutierrez’s position, she organizes and leads the Membership Intake Process for APsi’s Associate Members. Despite not having on-campus activities, Gutierrez was able to virtually recruit new members into the organization.

The chapter made the decision to make Associate Members, those who are in the process of becoming members, a main priority. Since this process began before the shut down of social gatherings, Gutierrez dedicated the majority of her time to successfully cross five new members into their chapter. The process takes months to prepare for their new member presentation.

“On April 19, Alpha Psi Lambda was able to successfully cross the line ‘eXito’ which consisted of five new members,” Gutierrez said. “I just want to congratulate our new members because they worked so hard throughout the process and managed to cross into Alpha Psi Lambda during a pandemic.”

Gutierrez expressed how thankful she is for the support of NKU’s Fraternity and Sorority life throughout the pandemic and Alpha Psi Lambda.

The Alpha Rho chapter was looking forward to participating in the NPHC Yard Show and celebrating their spring graduates, Cierra Carter and Eboni Porter, but those events were cancelled.

Although those events didn’t happen, they took part in hosting a virtual NPHC Week where all fraternities and sororities within the Council came together to educate and have a good time with NKU students.

According to Blair, the members miss each other and they use FaceTime and texting to keep in touch.

“We text and FaceTime each other on a regular basis and make sure we’re all doing well physically, mentally, emotionally and spiritually,” Blair said. “We miss little things like our sister dinners and gathering in each other’s room to talk and study.”

The Alpha Rho chapter is among the number of groups that had to cancel their philanthropy events. Zeta Phi Beta Sorority, Inc.’s national philanthropy is the March of Dimes. Each year the Alpha Rho chapter holds a March of Dimes baby shower to collect monetary donations and baby items while also raising awareness to premature babies and the importance of the health of women and their babies.

“Unfortunately we had to cancel,” Blair said. “We have rescheduled the event and are prepared to make it bigger and better than ever!”

Please join @nkunphc via Zoom tomorrow for day 3 of #NPHCWEEK “Talks with NPHC” 💙🤍❤️🤍💙💛🖤💜💛💚💕 You can download the zoom app if you’re using your phone OR if you’re using your laptop go to the zoom website, click join, and type in the meeting ID number: 930 3636 3653 Time: 6:00PM Link is located in our bio‼️ ALL CURRENT STUDENTS AND ALUM WELCOMED!!!! We hope to see you then💙 #NKYD9 #NPHCWEEK #Zoomchat #nkuhealthyathome #zphib

Malik Washington, graduating psychology and public relations senior, serves as the polemarch (president) of the Pi Pi chapter of Kappa Alpha Psi Fraternity, Inc. Due to the virus, things have changed from the national board, down to the college chapters, events and conferences which have been canceled since the beginning of the pandemic.

“It actually sucks that I will not be able to spend my final days in undergrad on campus,” Washington said. “I had a few more things on my NKU bucket list that I wanted to complete and didn’t get to.”

Fraternities and sororities typically require their members to get service hours and go to events, which changed. For the service hours Theta Phi already logged they will be carried over to the next semester.

Adams described nationals as being supportive during this time by setting up a program called “Penguin Pals.” This is a pen pal experience with another sister near or far. Theta Phi typically celebrates their Founder’s Day in late April, but it will now be celebrated virtually by nationals.

Fortunately, the chapter held their philanthropy events, which are centered around fighting the plight of homelessness, in February. The chapter typically donates their time, money and goods to shelters. However, as of now, the shelters are closed because of COVID-19, which has made it somewhat difficult to help the cause, Adams said.

The chapter’s local philanthropy, the Emergency Shelter of Northern Kentucky, is still trying to help the guests that would be staying there. They’re working on a hotel project that would allow the homeless to temporarily stay at a vacant hotel.

“We can no longer donate our time, but this does not mean we cannot serve,” Adams said. “I try to share Facebook posts whenever the shelter asks for donations. I know this time is especially hard for many people financially and emotionally. It’s difficult to ask for monetary donations and other goods, but I still try to share their posts in case someone with these extra resources could spare them.”

“I am incredibly thankful that my sorority truly supports me and understands the necessity of doing this,” Adams said.

The only thing that would make this Founder’s Day better is if we were on campus sharing it with our sisters. Through our years at various schools, we have met and learned from thousands of women. We empower one another to be the best of the best and we hold ourselves to the highest standards. We are proud to be women of Theta Phi Alpha 💛

“We are new to campus, so it’s not that we’ve had to really make any changes, but we’ve more so just had to think of new ideas and how we can actually do them online,” Warren said.

Phi Delt recently had a virtual philanthropy campaign where they encouraged people on social media to donate money to a mini-food drive. The fraternity took the proceeds to purchase necessities for the Brighton Center, a nonprofit in Newport.

We’re proud to partner with @nkudeltagamma to extend our supplies drive until this Sunday! If you’d like to donate, ask a Phi or DeeGee about drop-off locations to ensure minimal in-person contact. All money donations should be Venmo’d to @alex-b-smithson. We’re in this together, Norse Up! . . . #PhiDeltaTheta #PhiDelt #GreekLife #NKUGreekLife #Quarantine #covid19 #NorseUp ⚔️

All members of Phi Delta Theta, Kentucky Kappa were recruited during the spring semester before all the closings occurred. Warren finds it frustrating not to be able to finish the semester with his brothers because this was a new experience for all involved.

“We were really excited to participate but the situation at hand is only a minor setback. We’re still continuing with business as usual while complying with social distancing,” Warren said.

Austin Hill, athletic training junior and president of Tau Kappa Epsilon, had to make the decision of cancelling their major events such as their annual formal, philanthropy fish fry and smaller fundraising events.

“The money saved from not throwing philanthropy events in the spring is being redirected to throw a larger event at a different date,” Hill said. “As for formal, we are still working on rescheduling, postponing has been the name of the game.”

The chapter is hopeful for the fall and has been in the process of bringing in new members for the spring. Modifications were made for their candidate process to fit around current times, so they still plan to have a spring initiate class.

“The whole point of our organization is brotherhood and philanthropy and while we still have both,” Hill said. “It is a major adjustment period to the new norm we’re facing. Communication is key and that’s something we’re improving by doing things such as chapter mental health and wellness checks by way of phone calls from our executive board.”