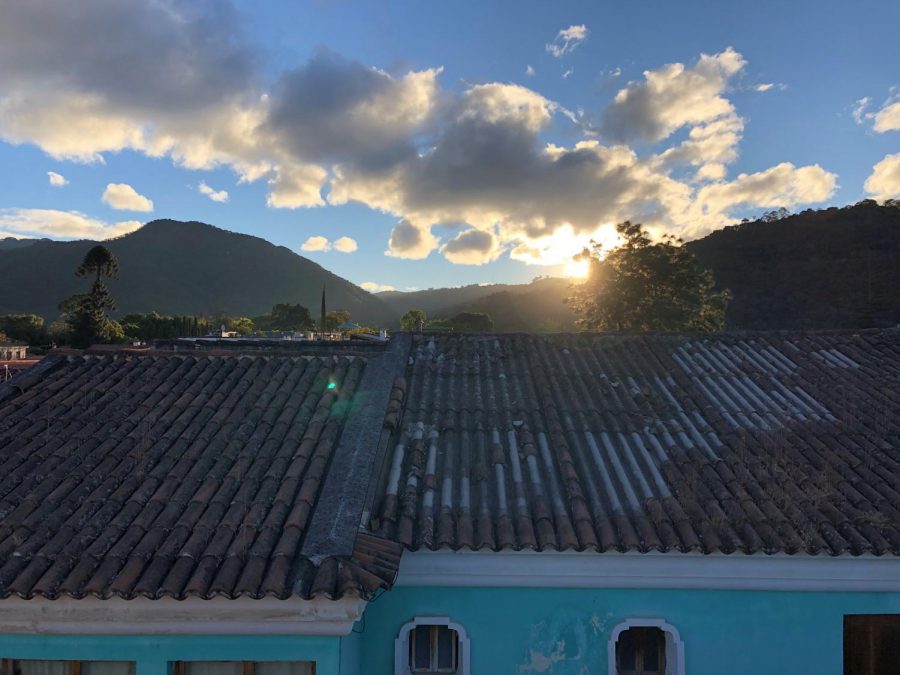 A rooftop view from their hotel in Antigua, Guatemala.

Norse in Australia, Costa Rica and Guatemala tell how coronavirus has impacted their study abroad

The University announced on March 18 that all Education Abroad trips are canceled through the end of summer. Michelle Melish, assistant director in the office of education abroad, said emails were sent to the 16 students abroad asking them to come home.

For Christina Fultz, senior Spanish and elementary education major, the email came just 10 days after she had landed in San Jose, Costa Rica.

Fultz was one of several students that had to end their study abroad trips early. She was in Costa Rica because she was required to help a school abroad for one of her classes.

She arrived Saturday, March 7 and helped the school’s second grade class on Monday during the first day of school. After classes ended on Tuesday, the school’s principal said they were transitioning to online teaching.

“I kind of knew things were different the first day of school,” Fultz said.

After helping online for five days, she woke up on March 17 to an email from Anne Perry, study abroad coordinator in the education abroad office, that said students were being recalled.

Fultz left Costa Rica on March 18 at 6 a.m. and arrived back in Cincinnati at 6 p.m. to start her 14-day self isolation.

Now that Fultz is back in the area, she is looking for opportunities to still get the experience she wanted down in Costa Rica.

On the electronic media & broadcasting trip to Guatemala, Bailey Fox and Alex Sprecker, both EMB majors, said that the spread of COVID-19 didn’t alter the itinerary of the trip, which was shooting documentary footage that the students would edit upon returning to campus.

Fox said it was like they were living in a completely separate world for a week.

“All these horrible things are happening at home and we were just hanging out in the pool full of volcanic spring water,” Fox said.

Both Fox and Sprecker said they received the same emails as the other students, but cell service was limited.

“Sarah [Drabik] and the other faculty member, Chris Strobel, both had access to the Internet through Los Andes’ Wi-Fi, and as soon as they got information they passed it to us immediately,” Sprecker said.

Sprecker, junior, said the group was told that Hartsfield-Jackson Atlanta International Airport—their first stop in America—wasn’t screening for coronavirus at the time. Upon returning to Cincinnati, they were encouraged to practice social distancing, stay off of campus, and practice a 14-day self isolation.

The class was supposed to start editing their documentary in the classroom on March 16. With the extended break and their 14 day isolation, they won’t be editing until March 30 at the earliest.

“It’s a collaborative process. You might have your main editor, but the smallest group we have was two [people] … most groups were four and five,” Sprecker said. “So you want everyone’s opinion. But that’s difficult to do if you can’t be on campus.”

Regardless, Sprecker said his experience was worth the risk and he doesn’t want anyone to be scared to study abroad.

Fox, senior, said this trip raised concerns for her upon returning, as her mother—who lives in the Lexington area—has an autoimmune disease and would be at risk.

“None of us really thought it was a big deal. It wasn’t happening in our backyard at all. But as soon as it got real, I just cried,” Fox said.

When Fox was given the option to opt out of the trip before they left, she said she didn’t really consider not going, and the thought that going abroad could be a threat to others didn’t even cross her mind.

“If I realized it was going to get as bad as it was going to get, I definitely would have canceled my flight and figured it out,” Fox said. “Even taking an extra semester, because this is crazy and right now I’m on a 14-day self quarantine just because I was in airports.”

Fox said her initial reaction to school moving online was to start crying. At that moment, she realized how big of a threat  coronavirus actually was.

“It was just really depressing because like there’s not much you can do in a situation like that,” Fox said.

Because of the 14-day quarantine, Fox lost her job on the university’s ESPN3 team. She still has a side job subtitling videos, which has helped her avoid thinking about being in quarantine.

“I don’t think it’s really set in yet. Right now I’m just kind of viewing it as, ‘Oh, I’m home and I’m working on subtitling stuff and it’s spring break,’ but I know in about a week, it’ll definitely really set in once classes start,” Fox said.

Alexia Ball, senior elementary education major, started her study abroad trip at the end of February, where she student-teaches at Alawa Primary School in Darwin, Australia.

When she received the email that said she may have to come home, she believed—along with her family and host family—that Australia would be safe. At the time, her school hadn’t switched to online classes yet but was taking precautions.

“Because we are having a holiday in three or four weeks, they were just like, ‘just be wary of where you are traveling if you’re going to travel,’” Ball said.

Ball said her communication with her family wasn’t too bad. She said they’d often FaceTime at night or the morning and text each other, so her mom and her sister weren’t worried about her becoming infected with coronavirus. Instead, her family is more worried about the repercussions of the virus.

Ball said her host parents are more worried about her host mom getting the virus before Ball does and what this means for their holiday plans.

Ball sent an email to Perry saying she was “battling the decision to come home or not.” Ball assessed all the options: getting a flight or staying in Australia; to leave early or to stay for an “indefinite amount of time.”

She ultimately decided to leave Australia on March 21.

“The virus nationwide has put a damper on things, and it’s really because kids are now out of schools, and some kids look to schools to eat, people are not able to work as much; it’s becoming a crisis,” Ball said.

She said although her original plans in Australia have changed, she’s learned a lot.

“I keep a journal everyday of different things I’ve been learning along the way. I’m really grateful that I’m able to be here and I’m able to learn,” Ball said.

Michelle Melish, who is a member of the International Work Group on the coronavirus team assembled by Provost Sue Ott Rowlands, said her responsibility is to make recommendations for action in their group. These recommendations are then sent to the Provost and then President Ashish Vaidya for the final decision.

Melish said that there are five students still abroad.

“[The Office of Study Abroad] has been working overtime day and night to ensure the safety of all faculty, staff and students and the community at large, here and abroad,” Melish said.

Melish, who has been a part of the travel industry for decades, said while she’s not seen anything like this before, she’s seen people come back together after tragedies.

“There’s been many tragedies along the way and, the one thing that I’ve always learned is that people are resilient,” Melish said. “We rebuild communities afterwards, and it might not look the same as before but seeing people come together in the face of tragedy is a really beautiful thing.”

“I know this too shall pass and we shall overcome it and rebuild and move on from there.”