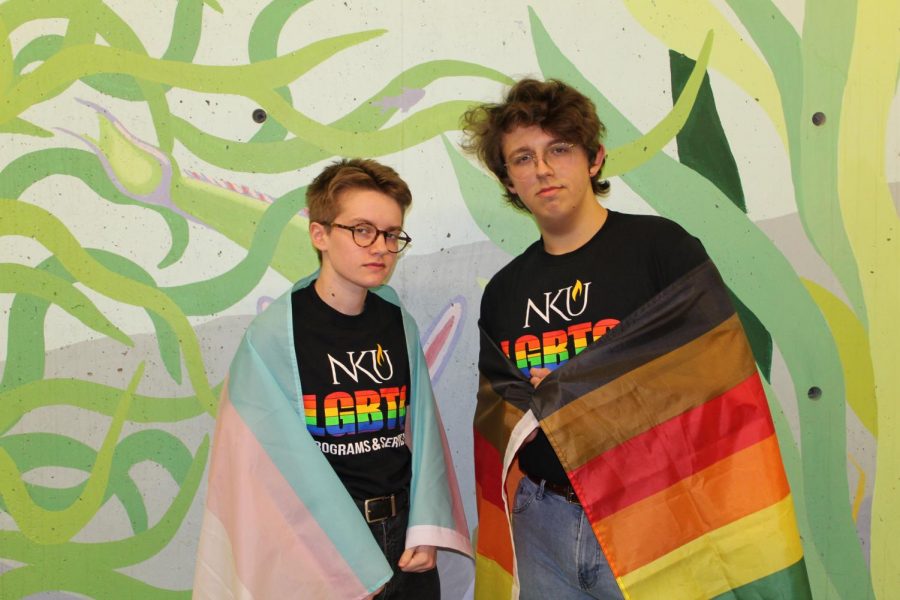 Ray Archer, undeclared sophomore, was terrified when he first came to NKU as a freshman. He had just socially come out as a transgender man and wanted to be himself, but he didn’t feel like there was an organization available on campus for his identity.

He wanted a space for queer men on campus, where any gay man and/or masculine-aligned person attracted to men could be themselves without fear of retaliation.

Current organizations exist for LGBTQ+ students, such as Common Ground—a gay/straight alliance group—and the Gender Initiative—a group for transgender and gender non-conforming students—but Archer wanted to create a group to fill the needs of gay men and/or masculine-aligned people who are attracted to men.

Archer then spoke with Director of LGBTQ Programs and Services Bonnie Meyer and began working to create what would become Friends of Dorothy.

In 2018, Lavender Society was created for women and/or feminine-aligned people who are attracted to women. Meyer wanted an organization for queer women on campus due to the lack of women’s centers in the area and the increasing need from students to form such a community. As Lavender Society grew, Meyer said several queer men began asking for their own space to talk about their experiences.

Archer asked his friend and sophomore musical theatre major Austin Adams if helping start up a campus group for queer men would be something he was interested in. Adams was excited, and signed on to be the club’s vice president.

“[Austin] came back to me the next day and said, ‘I’ve had about 50 people talk to me and say that they’re interested.’ I said, ‘I didn’t think that it would take off at all.’ I expected it to need a little bit of time to start up,” Archer said.

Archer received an outpour of positivity and interest from people about the group. The group’s initial Facebook post received over 1,000 impressions. Several people texted Archer about their excitement, and some alumni were inspired to start an organization of their own.

Archer said he panicked when he realized he didn’t have a name for the group; he and Adams texted their friend Randy Geers, junior acting major, and asked for ideas.

Geers suggested “Friends of Dorothy” as a nod to the 20th century euphemism for asking someone their sexuality without others knowing. The term is also linked with Judy Garland, who many consider a gay icon, as well as her character Dorothy Gale from the 1939 film “The Wizard of Oz.”

“It ties us to our roots, as well as also making [the group] seem safe for non-out men,” Archer said.

Archer wanted the group to have a gender neutral name—such as friends—that wouldn’t exclude or out anyone. Even if someone isn’t out at home, they can find a second home with the group.

“It’s safe to have a space where they can be like, ‘I’m gay.’ And we’re like, ‘So are we, that’s cool,” Archer said. “We all are, and if your identity changes later, that’s cool too. We’re glad to just be here for whenever you need it.”

Goals for the group

Adams said he wants the group to feel like a community for all gay men and masculine-aligned people on campus because he feels like there’s a split between people in different campus organizations.

“There’s people who are gay men that are in the theater world or the School of the Arts world, in general,” Adams said. “There’s the communication gays and then there’s the frat boy gays, and it’s like, we’re all gay. Can’t we all just hang out?”

Adams said it can be hard for queer people to reach out to other queer people, and the group will attempt to create a setting where they can do that.

Archer said sometimes his identity is targeted when he’s with his friends, intentional or not. The experience can be scary and he wants to create the opposite feeling for people by creating a space where no one will say anything that will hurt or attack them.

Whether someone is out or not, Archer wants people to be able to identify and relate with others who have gone through the same experiences.

“Sometimes before you can come out, you need someone to show you that it’s going to be alright,” Archer said. “Because, for some people, there is that fear of ‘When I come out, what’s going to happen? What if it’s bad?’”

“Sometimes it might be. But for some people, they just need to see that it’s okay to see that other people are living out and it’s fine, and that they can be open about their identity. It’s just important to have that kind of space and interactions with your own community.”

Advisor and Director of LGBTQ Programs and Services Bonnie Meyer wants the group to grow, adding that she will support them in whatever they’re trying to do. Meyer said that whenever a student walks into her office and asks if they can start a new group, the answer is always yes. She said organizations like Lavender Society, the Gender Initiative and now Friends of Dorothy are all student-driven.

One of the first conversations Meyer had with Archer was about an advisor for the group. She said the conversation would look different if she was in the room, as she is a “queer chick” whose experiences are slightly different.

“It’s not my space. I don’t want to hinder any conversation that would happen or that needs to happen by putting myself in the space,” Meyer said.

Meyer is currently looking for an advisor, or co-advisor, whose identity fits the group. She said being an ally is important and something that she talks about often with students.

Friends of Dorothy is open to gay, bisexual, pansexual, transgender, queer, nonbinary and/or masculine-aligned people, regardless if they’re out.